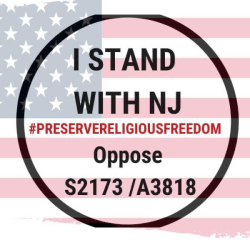 From New Jersey Globe on S2173 and the Amendment that allows Private Schools to retain their religious exemption.  How ANY politician in 2020 would not have seen how racist and elitist this amendment is only shows that the goal has never been public or pediatric health, there is a pharma agenda being forced upon us.  Each time pharma/politicians overstep the boundaries of American rights, more eyes open up. Surely this is the case here, and we hope it makes politicians like Jamel Holley more willing to take a look at the CDC Whistleblower and the damage done to African American children in particular. Every micron we move forward makes a difference.

...Assemblyman Jamel Holley is whipping votes against an amended version of a bill eliminating religious exemptions for vaccinations due for a vote in the legislature’s lower chamber on Monday.

The Assembly passed the original version of the bill 45-25 with six abstentions last month. The new version creates a carveout for private schools and daycares, though it requires those institutions report he number of enrolled children who inoculated.

“With these new amendments, I can guarantee that a majority, if not all of the African American Members of the Assembly will not be voting in support of this bill that discriminates based on wealth, address and ability to afford private education,” Holley said. “I’m working the phones, and we have gained traction to defeat the bill.”

Bob,
Absolutely right. Let's have a velvet revolution by Just Saying No!

For everyone who makes it to Trenton … remember … each one of you represents a couple of thousand of us who for many reasons cannot attend .. we will be with you in spirit and support … THOUSANDS OF US … who greatly appreciate those who do attend for SPEAKING FOR US.

2020 may finally be the year when our voices are heard … we have science on OUR SIDE … we have growing numbers joining us … it begins TODAY IN TRENTON … hopefully will be remembered in history the same as … July 29, 1775 .. when the first shots were fired just after dawn in Lexington, Massachusetts the morning of the 19th, the "Shot Heard Round the World." The colonial militia, a band of 500 men, were outnumbered and initially forced to retreat.