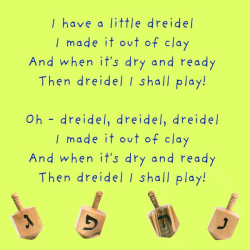 Note: We need more religious leaders to speak out. I'm Catholic, and I think Priests, because they can not marry and do not have children of their own, are unlikely to feel the sharp tug of duty on this issue. Despite it being the moral issue of our time, as far as I'm concerned. Feel free to correct me if you would like. But other religions and Christian denominations do allow their clergy to marry, and they allow female clergy.  Children should spin dreidels in December, but they should not spin in circles, watch spinning ceiling fans or spin other objects because of vaccine injury. Happy Hanukkah which begins on December 22, this year.

By Dr. Shannon Kroner
Doctorate in Psychology and a Masters Degree in Special Education. She has worked with special needs kids since 2001. Executive director of non-profit FOR-US.

In a bold effort to fight current New Jersey legislation, several prominent rabbinic leaders who direct Beth Medrash Govoha, the largest rabbinical college in the United States, have written a letter voicing their concerns regarding government policies that infringe upon religious freedom. All rabbis agree on the Torah principle that one must “guard their life exceedingly,” yet debate abounds surrounding the topic of vaccinations. From within this heated debate on vaccines, Beth Medrash Govoha has bravely stepped forward and taken a side in an attempt to halt New Jersey bill S-2173, which aims at removing religious vaccine exemptions.

Just this past year, 26,000 students were kicked out of New York schools following the passing of one of the strictest vaccine mandates in the country, removing the religious exemption, and making it near impossible to receive a medical exemption. New York has now joined the ranks of California and Maine in their loss of religious freedom. While many rabbis concur that “guarding one’s life exceedingly” includes receiving vaccines to protect from specific illnesses, there is a growing body of rabbis concerned with the skyrocketing numbers of childhood disabilities and cancers, who are researching the potential risks surrounding vaccines. This informed group of rabbis interpret the Torah principle of “guarding one’s life exceedingly” as forgoing further vaccination to avoid risks to a child who may have already been injured by vaccines or have a predisposition to potential adverse reactions. We must not ignore the potential risks with vaccination. The National Vaccine Injury Compensation Program (VICP) has already paid out over $225 million in legally and medically proven injuries in 2019 alone, and over $4.2 billion since 1986 when Congress passed the National Childhood Vaccine Injury Act (NCVIA). This was the creation of a no-fault compensation program to stabilize a vaccine market adversely affected by an increase in vaccine-related lawsuits.

While the role of a rabbi has often been one of guidance and comfort, especially when making important medical decisions that could impact one’s life, the U.S. government is finding ways to come between man and religion. For centuries, rabbis have often collaborated with medical doctors and their patients to help individuals evaluate risks and make important medical decisions together. For instance, one New Jersey rabbi and father of seven children, shared his personal story of his first three children who were severely injured by vaccines. Due to fear of injuring his youngest four children, he diligently sought the guidance of both doctor and rabbi regarding further vaccine decisions. Both doctor and rabbi, suggested he forgo any further vaccinations for his children. Today, his three, fully vaccinated, older children currently suffer from ADHD, neurodevelopment disorders, speech delays, and asthma, while his youngest four, unvaccinated children are healthy and meeting all their milestones. If this family resided in New York, California, Maine, Mississippi, or West Virginia, where religious and philosophical exemptions to immunization do not exist, they would have been forced to fully vaccinate all seven children, potentially risking their health, despite a family history and obvious predisposition to vaccine adverse effects. This slippery slope in which government is coercing individuals to go against their rabbi’s guidance, has compelled brave, religious leaders to take a stand in fighting to protect religious freedom. Many New Jersey rabbis have been encouraged to share their concerns regarding this type of government overreach and are planning to attend the S-2173 Senate Health Committee hearing on Thursday, December 12.  READ MORE HERE.

Why should one need a religious exemption to protect your child and yourself from unsafe product that has not been rigorously and independently tested?. Thats what government is for, and both parties have failed miserably, showing themselves to be nothing more than pawns of the vaccine industry for over 60 years.

Heck, the military is forced to accept vaccination without consent and are given experimental vaccines not yet approved by FDA so you can see where the mind set is. Since militarism is the main religion in this country one can argue vaccines are a religious mandate.

Only the chosen people (elite) can remain unvaccinated (Ford was said to have received a saline injection during his so called public swine flu vaccination), as the rich can simply pay off Docs for their kids vaccine certificates with the necessary tribute to Big Pharma

The orthodox Jewish community are the urban Amish, and worry the public health officials more than the Christian Right in rural areas. The Rabbis hear of every tragedy that befall the families in their communities, over time they have connected the dots. The Rabbis are standing up for their followers before their followers leave religious schools to home schooltheir children over this issue. Sending your child to a religious school was imperative till last year, suddenly observant jews are home schooling. Presidential candidates should take note, Bloomberg ran afoul with the Orthodox community over circumcision practices. Coercive vaccination practices will lead to greater suspicion and resistance in the long run.

I agree that religious exemptions should be restored in California, New York, West Virginia, and Mississippi. But restoring the religious exemption by itself will not put much of a dent in the autism epidemic. There are significant numbers of parents who can't or won't take advantage of a religious exemption. For example, it can be difficult to get if one is not a member of a religion that explicitly protects medical choice.

What I would really like to see is the personal exemption made available in all fifty states. This would be an exemption that any parent could use. As far as I can tell not one state legislature (red or blue)has considered this - or one politician (Democratic, Republican, Libertarian, Green, etc.) has spoken out in favor of this idea.

With Washington DC so entrenched in their self serving ways, ending this epidemic will be a long and messy process. It may well collapse from the inside. Our company has lost many good employees due to vaccine injuries to themselves and their children. So has Merck, the CDC, NBC, and pretty much every organization in America. This costs the company money, massive healthcare costs, lost productivity, and ultimately the cost of replacing the employee and training a new one. Tying this back to the church or temple, bankrupt people are unable to financially support wonderful causes like their faith. Parents in the know steer their children away from the military and healthcare where vaccine mandates are grim. Finally, people that are unable to work don't pay taxes. The US government can print money for a while, but this is coming home to roost, and its happening now.

Note; We need more religious leaders to speak out.

Amen to that .. which a wise sage long ago said …. "The only thing necessary for the triumph of evil is for good men to do nothing.”

If not for religious leaders speaking out .. who will take their place???