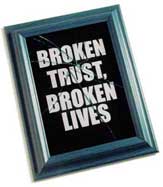 Last week a young boy asked me if I liked Science.  I really don’t like it.  It was my least favorite subject throughout elementary school and high school.  Full of wonder, and incredibly smart, this kid thinks the exact opposite – he loves Science!  I didn’t want to squash his enthusiasm, so I took a second before I made a reply.  Something else made me pause, too.

I was busy right before he approached me, but that’s not why the question caught me off guard.  The Science he loves is the same Science that made broken promises to me.  It didn’t just lie to me, it took everything from me.  That happened post-vaccination.  Science told me that childhood vaccines were 100% safe for my son and that his health would benefit from them.  Now non-verbal with seizures and regressive autism, my child is unable to function like this boy can.  I could tell this kid that at one point even though I didn’t like Science I trusted it, but then I’d have to explain why.  Not wanting to go into that intimate detail with a child I don’t know very well, I continued to think of a simple answer for his simple question.

As much as I still wanted to say to him, “Nope.  Science stinks,” I kept that to myself and replied, “You know what, bud?  As a kid, I did not like Science at all.  But as an adult, I appreciate it.”

I do appreciate Science.

But I’ll never be able to fully trust it.

Satisfied with my answer, the boy immediately asked me a Science-related question.  It wasn’t complex or about vaccines, a topic I know well, but it was a question that I could not answer.  Stumped, I promised that as soon as I had time to do some reading I’d find some information for him.  He told me he, too, wanted to continue to find the answer on his own.  So we made a game of it – whoever could answer the question first wins.  There wouldn’t be a prize, just satisfaction that we’d learn something and wouldn’t be puzzled any longer.

Feeling puzzled can be unsettling.  I know that was the case for me back when my child experienced a negative reaction from liability-free vaccines.  They were supposed to help my kid, not hurt him.  They were supposed to bring life-long immunity, not present new medical problems.  When I realized I had more questions than answers about a topic I never thought to question, that puzzled feeling turned into something worse—fear.

What have I allowed?

After waves of fear came the waves of anger.

How could I have been so dumb, and why did I think I could trust these doctors so completely?

Once those emotions settled, I made time to learn and read.  I taught myself to do things differently for the future.  While reading, I discovered other parents like me and wanted to learn their strategies.  They were effective on getting more exact vaccine information prior to appointments.  They were able to say no to some and even to all of the liability-free vaccines, which, at the time, I never knew was an option.  They were also discussing treatment that, for some children, could reverse autism symptoms.  Inspired, I wanted to draw on their strength and success with my own child.  If they could do what they were doing, then so could I.  I was reminded just how naïve I still was when I presented some of this new information to our doctors.  I trusted that they were still there to help me.  They never really were.  That’s because they were incapable of looking beyond what their Science was telling them—that I was an emotional mother who was wrong to question them or any of their Scientific claims.

Things are different these days, much different.  Now, I know to read and read some more, to verify information as I come across it, and to keep asking questions until all of my questions are satisfied.  Appointments and decisions are much easier when I remember to do all that.  So is understanding Science.  It wasn’t right away, but during the process of having to read through so much literature in order to solve the medical problems my son was having, something else happened.  I could finally appreciate a subject I’d loathed most of my life.  It took awhile, but I gained a new-found respect for Science.  I maintain that respect even though my child still faces problems that were the result of vaccines.

Science is the study of the structure and behavior of the physical and natural world through observation and experiment.  It isn’t the selling of or the mandating of liability-free pharmaceutical products.  It isn’t belittling parents who understand the risks associated with vaccines either.  Those tied to the industry wish that it could be, which might be why they persistently claim, “The Science is settled!” whenever vaccine concerns come up.  I find it odd that out of every possible topic that a scientist might study, be it biochemistry, robotics, or genetics, only can Vaccine Science be settled.  How?  Scientists around the world are studying and working in their respective fields and on all manner of scientific topics.  They’re still making new discoveries, they’re still publishing their amazing findings, and they’re still very much encouraging the younger generation, like that boy who asked me a question, to join them in their efforts.  Unless it’s Vaccine Science, I guess.  Instead of following the same methods and protocols, that Science would rather turn people away from facts and propagate their version of vaccine absolutes.  I’m praying that changes before my children, and that young boy, grow up.

I loved seeing that boy’s eyes light up during our quick conversation about Science last week.  I also loved that he sparked my interest to look something up that I hadn’t before.  When I did, I took some notes on what I was learning.  I time stamped the notes to show him that at 5:42pm on Friday evening, I found a website that just might explain the phenomenon he was so curious about.  I’m hoping to find time this week to tell this kid what I learned.  I’m hoping it’s useful information that will answer his question.  I’m also hoping that he continues to be genuinely inquisitive, especially about Science.  It’s never a bad thing to ask a good question, especially when it can solve – or prevent – serious problems.

Nearly all of the medical science today is written to support marketing a product.

The best products to sell would be those with no product liability or those you can make billions & billions off of because they are addictive. They also like to sell products that are never used and have to be thrown away at a certain date / epi-pens.

The phony scientists endlessly mock the real science and are very well supported by the mainstream media who will print or say anything as long as there is money attached to it.

If you want a good laugh then it is worth reading Karl Popper on the smallpox vaccine.

"For example the theory that vaccination protects against smallpox is falsifiable: if someone who has really been vaccinated still gets smallpox, the theory is falsified.

This example may also be used to show that the falsifiability criterion has problems of its own. If one out of a million vaccinated people gets smallpox, we would hardly consider our theory to be falsified. Rather we will assume that something was wrong with the vaccination or with the vaccine material. And in principle such an escape route is always possible. When we are faced with a falsification, we can always talk our way out somehow or other: we can introduce an auxiliary hypothesis and reject the falsification."

Astonishing. This is Karl Popper's life work here. But in order to defend his precious smallpox vaccine he claims that everything he ever said on the philosophy of science was pointless drivel. That's how brainwashed he (and others) are when it comes to vaccination.

Falsifiability is an excellent criterion for science. The fact that vaccines are clearly not falsifible is exactly what we would expect because vaccines have precisely nothing to do with science. But of course most people - even the creator of the idea of falsifiability himself - cannot accept this.

Popper goes further into the depths of self-delusion:

Probability statements run into the problem of the choice of samples. "Scientists" can simply pick and choose whichever sample suits their narrative and ignore the ones that don't. We all know plenty of examples where a bunch of fully vaccinated kids got sick and no unvaccinated kids did. And yet, despite Popper's delusions, "scientists" still claim vaccines work.

Popper's indoctrination into vaccination was too great for him to maintain any sense of sanity.

They fail every single test. They are logically impossible. They are not falsifiable. There are zero observations to support them and there has never been a non-trivial (non-self-fulfilling prophecy) prediction made by assuming they worked.

Well, so many many topies get put under the heading of "science" that the word has become meaningless.

There are science writers who would like to get freelance work . .. but maybe they write about astronomy, when a biology writer is needed. Or they write about (so-called "heatlh care") when what is needed is physics. And so on.

Then there is the idea that "science keeps changing." That covers a lot of territory. Chocolate is good for us, or it's bad for us. Coffee ditto. Alcohol (in moderation) ditto.

There are too many groups and camps and "research facilities" And even if every one of them were honest -- which is not the case -- they would be arguing amongst themselvcs.

A good example of this is Alzheimer's research. There are "tauists" and "baptists." And (God help us!!) there are the well-fund groups which, over and over again, keep repeating failed studies to block amyloid. Therefore, some part of the problem is giving too much money to people who are actually too stupid to learn.

Not all of it is political.. And by no means is all of it, or even most of it "science." That's a word that's lost a great deal of meanin' lately.

Odd at my advanced age I have learned there are "forms" of science .. such as … "tobacco science" and "junk science" … both "forms" highly successful in persuading people to think they are "real science" .. which of course we all know both "forms" SCIENTIFIC FRAUDS.