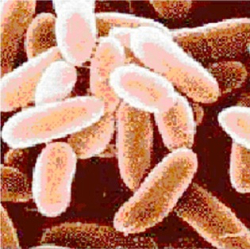 Most of us the Saturday after Thanksgiving here in the USA: "I really don't feel like having a turkey sandwich, but hey, it's in the fridge and I'd hate to waste it."  There is no threat of a bioterror attack in the Midwest at this current time. If you had to choose the cities in America where a threat might occur, St. Louis, Missouri wouldn't make the top 20.  Who submitted the grant applications and why?  Do the first responders have the right to full informed consent and to refuse this vaccination?

Emergency responders in St. Louis are among the first to receive the anthrax vaccine as part of a federal program to inoculate local personnel.

Anthrax is a disease contracted when a person consumes or inhales deadly spores of anthrax bacteria. When modified to a powdered form in a lab, anthrax can be distributed through the air by terrorists.

Emergency responders such as firefighters, emergency room workers and police are especially are at risk of contracting the illness in the event of a bioterrorism attack....

....There is no imminent threat of anthrax bioterrorism in St. Louis, House said. The Department of Homeland Security chose St. Louis and the other city, Oxford, Mississippi, because they submitted strong grant applications.

But it is important to inoculate first responders before the vaccines expire, Zink said.

Anthrax vaccines have a shelf life of only a few years. After that, they are discarded. The program is a way to use the vaccines in the stockpile and mitigate a potential threat.

I hope that actual informed consent is being practiced and that the first responders are being told about the possibility of long term side effects.
My husband left the military after getting multiple anthrax shots; he became allergic to his own sweat, and started despite having been a tough military guy, started having chemical sensitivities to things like ant spray. Our son, conceived after my husband's anthrax vaccine series, was born with multiple birth defects and a rare genetic condition that neither of other carried. We were told it was caused by some kind of "environmental factor" Two other military babies that I knew of born around the same time also had this condition ( which in one of its forms is incompatible with life and leads to miscarriage) .
And there may be a possibility that squalene in some anthrax shots may be passed between intimate partners in sweat, semen etc. Squalene has been linked with gulf war syndrome.
https://www.researchgate.net/publication/11252520_Antibodies_to_Squalene_in_Recipients_of_Anthrax_Vaccine
I recently spoke to a lady selling health insurance. We got on to the anthrax topic; she was also ex military and had 9 miscarriages after the anthrax vaccine series. As she said, people just don't like to talk about what it did to them.
My heart goes out to these first responders. Kind people putting there lives on the line. I hope someone explains the risks to them so they can actually make a free informed medical choice. . And that the doctors, bureaucrats etc pushing the shots actually have to take the shots too, or have to tell everyone, including their patients, why they themselves don't want to take the risk for themselves and their unborn children...

One thing that experts agreed upon after the letter attack was that it is so difficult to work with anthrax that terrorist would not even consider it.

I’m not going to be lead down the poster cia’s rabbit-hole, other than to link to an article by that Bastion of truth (when it suits them) the Guardian:

I would highly recommend all those first responders considering to VOLUNTEER for the Anthrax vaccine to read Gary Matsumoto's excellent book .. "Vaccine A … the covert government experiment that's killing our soldiers and why GI's are only the first victims".

I thought the many servicemembers who were severely damaged by the Anthrax vaccine had ENDED the experiment years ago. Wonder why they didn't require MILITARY to again bear the brunt of this dangerous vaccine as we all know the military can order whatever they want and the volunteers they command are at their mercy? If I remember correctly … many life-long military career men/women RETIRED FROM MILITARY RATHER THAN BE FORCED TO ACCEPT THE ANTHRAX VACCINE … perhaps that explains why they sought VOLUNTEER FIRST RESPONDERS INSTEAD.

Terrorist attacks are always designed to be completely unexpected. There have been many terrorist attacks planned for, but thankfully, disrupted in Missouri before they occurred. As there have been virtually everywhere. It's very unwise to say that St. Louis is an unlikely place for a biological (or any other) kind of terror attack to occur. EVERY terror attack in the developed world occurs where you wouldn't expect it.

Taking the anthrax vaccine should be voluntary, of course. It is a dangerous vaccine, but I think the disease is nearly always fatal. And remember right after 9/11 there were a number of people successfully targeted with anthrax dust in letter, and many of them died.

Now that we've killed al Baghdadi, I think a horrific terror attack somewhere in the US is almost inevitable. It's hard to see how law enforcement could be everywhere all the time hoping to prevent it. It might well be that there will be a biological attack this time. Personally, I wouldn't take the shot, but if I thought there were an imminent threat, I would take the nosode.

Another notable story about St Louis based Ascencion and Project Nightingale.
https://www.wsj.com/articles/google-s-secret-project-nightingale-gathers-personal-health-data-on-millions-of-americans-11573496790
this ai system wants to pick and fire your drs for you, decide your treatment, and charge you more if you disagree with Hal.