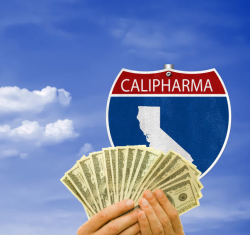 Note: Thank you to Laura Hayes for sending out this letter from California chiropractor Dr. Darrel Crain. It's a perfect read today, the day of the VIE event in Washington, DC. All hail theVaxocracy! Or face the consequences..... The letter is printed below.

They Shoot Children Don’t They?

Welcome to the state of Calipharmia, formerly known as California. The Vaxocratic Party, formerly the democrats, have ushered in a new form of government here best described as a Vaxocracy.

Under the laws of the new vaxocracy, free speech is protected. Well, almost. Every topic imaginable can be freely debated and openly discussed. Except vaccines. Vaccines are totally off limits. Period. Are questions allowed? Nope. Concerns? Forget about it.

Any parent who disagrees or feels uncertain about their child getting every shot on the CDC vaccine schedule is an “at-risk” parent suffering “vaccine hesitancy” according to vaxocratic doctrine, which protocol requires that these parents be called out and publicly humiliated.

If you have children in your home not fully vaccinated, Child Protective Services may soon be ringing your doorbell. And CPS may call the police. When the police arrive, they may take your child and hand her over to CPS to be placed in foster care. What could possibly go wrong?

If you are a medical doctor who has helped parents exempt their child from mandatory shots to avoid vaccine-induced illness, your career is pretty much finished. Investigation, chastisement, debasement, and punishment are in your immediate future. Also, your medical license is on the line.

But a medical license appears to be irrelevant now. By vaxocratic decree, medical decision-making for children now resides in the hands of government desk-jockeys. The vaxocrats have ruled that state functionaries are much more qualified than parents and family doctors to decide what is best for each child. Pencil-pushers working for the state now have the authority to just say no to medical exemptions they don’t like. Which is every medical exemption that ever crosses their desk.

Bureaucrats have been steeped in proper vaxocratic doctrine, which is as easy as one, two, three:

First, no vaccine has ever harmed a flea. (Not that vaccines are actually tested on fleas for safety. But then again, no vaccine is ever safety tested at all, for children or otherwise.)

Second, vaccine-induced catastrophic illness only exists in the wild imaginations of parents, who are obviously confused and delusional from reading vaccine misinformation and disinformation on the Internet. In other words, they have been reading actual information unacceptable to vaxocratic logic.

Third, experts agree, everything is fine. Don’t worry, be happy.

Rest assured these conclusions are supremely trustworthy, because they are the result of years of honest and careful consideration by the vaccine industry on how to effectively spread a perfectly uncritical belief in the holiness of vaccines. It is hard enough to convince a healthy person to accept a medical intervention known to cause severe illness and death, but much worse once they realize vaccines are wholly unnecessary, horribly neurotoxic, and responsible for many ruined lives and much pointless suffering.

Speaking of faith, it is important to remember just how fragile a vaxocracy really is, requiring strong faith to maintain it in power. The vaxocrats would have preferred using actual science to support the forced cradle to grave injections, but it just didn’t work out. That is why preemptive campaigns must be constantly deployed against parents seeking the truth about vaccine dangers.

The unsuspecting public must be carefully protected from being exposed to annoying scientific and historic facts that tend to raise questions that are very pesky indeed.

For example, medical historians rank the importance of vaccines as a minor historic footnote that showed up late in the game of public health policy. This fact is impossible to reconcile with the vaxocratic belief that vaccines rescued humanity from certain death by infectious disease.

Another topic to avoid is the reality of widespread vaccine failure, because how can you justify forcing the mumps shot on children when year after year the only people coming down with the mumps are all vaccinated?

Then there is the flu vaccine. Do you think people would just walk into the drugstore and roll up their sleeve for the flu shot if they knew it takes vaccinating 100 people to prevent one, single, measly case of flu-like-illness in an average year? Worse, what if everybody knew it causes paralysis, thrombocytopenia, anaphylaxis, and eye inflammation in some people each year, and makes your immune system weaker with each shot?

Much other information must be disappeared. There are still too many reminders on the Internet of the old days when the Nuremberg Principles were still intact, when religious beliefs were still honored, back when informed medical consent meant actual parental authority over health matters for children.

And it is not just the Internet that needs to be scrubbed of unauthorized vaccine information. 24-hour vigilance is necessary to nip vaccine discussions and dissent in the bud on social media. Loony parents are known to post ridiculous comments such as, “my kid was just fine until they got their shots, now they have autism.” Vaxocratic protocols must be unleashed immediately in such cases, primarily in the form of personal attacks on anyone who dares mention they have a vaccine-damaged child, or their baby died after getting 8 vaccines during a “well baby checkup.”

At this point, full-blown censorship of vaccination information is the only way to protect the brittle vaxocracy from too close scrutiny. Internet search engines such as Google are compliant and working hard to erase all vaccine information not emanating from federal agencies and vaccine makers. Social media giants have jumped on the censorship bandwagon as well, and are washing clean their platforms of any discussion about vaccines.

Exciting plans are being made in these heady days of vaxocratic rule. Vaccinating every single kid in Calipharmia with 76 vaccines by the age of 18 is just the beginning.

Adults are in the crosshairs for mandatory vaccination every year for the rest of their lives, not to mention “catching up” on so many shots they are already missing. It won’t be long until adults who are not up-to-date on a long CDC list of vaccines will be denied a driver’s license, a passport, access to airports, train stations, and other public spaces. It is just a matter of time until noncompliance with mandated shots will be punished with fines collected through income tax penalties and garnished wages.

The vaxocratic ideal has been meticulously engineered by bright minds within pharmaceutical corporations working closely with former coworkers who now work inside government agencies.

The triumph of the installation of a vaxocracy in Calipharmia is cause for champagne corks popping in drug company boardrooms and government offices alike. Exciting efforts are being ramped up to establish a vaxocratic beachhead in more and more state capitals.

The mainstream news media are very careful to only report authorized vaccine news, and black out everything else, because their advertisers, pharma companies, don’t want to hear it.

For example, most speeches by Robert Kennedy, Jr. must be blacked out, including his recent comment that “fascism is government dominated by business.”

Another bit of Internet history the vaxocrats would like to bury is the definition of fascism according Benito Mussolini: “Fascism should more appropriately be called corporatism because it is a merger of state and corporate power.”

The medical/pharmaceutical/industrial complex is showing us just how far corporatism has come in the current era.

Strep articles not in fact by me.

Bill;
A Canadian study that looked at thousands of medical records stated that they found that if some one gets a flu shot and then gets the flu, they are much more sicker, and sicker longer.

The study was repeated, as an animal study. Minks were vaccinated by the flu and then exposed to the actual flu and they were sicker than those not vaccinated and sicker longer.

Is that kind of what you wanted?

I am pretty sure that the DPT vaccine makes children more vulnerable to pneumonia and ear infections, and strep for some reason.

Here on "Age of Autism" John Stone has written several articles on how the flu mist is causing more cases of strep infections in the U.K.

This question keeps rolling around in my head....
What if, for some groups of people, vaxxes are in fact COUNTER-PRODUCTIVE?....
We all already know that humans are NOT a "one size fits all" population.
So doesn't it stand to reason that SOME people really ARE more likely to get whatever bug they have been (supposedly) vaxxed against?....
This is a real, serious question, and I hope somebody here at AoA will consider it carefully, and see what actual evidence might support this idea?....
KEEP UP the GOOD WORK!....and have a good weekend!

Thank you Laura Hayes ,excellent article . This is the year of the pig with or without pig-tails ?
Get the swine's evidence based standards, stamped, labeled, and branded out in the fresh air and sunlight ,really shows them up in their true colours .
Scoped out from nose to tail, and in desperate need of a good scrub down with a wire brush and a bottle of Lysol.
The public are not buying it or wearing it .
A symphonic cacophony of cac handed fractured /failed or non- existent risk assessments .
They can away and get stuffed with it !
See
The Economic Value of Vaccination . Why Prevention is Wealth
https/www.ncbi .nim .nih .gov> pmc 4802700 12 Aug 2015
And
German parliament approves compulsory measles vaccination.
The Guardian 14 Nov 2019

Sadly, we are now well beyond the "Vacci-Nazi police" in the US of A.

Brilliant, no vaccines no bank account,your right to feed yourself stopped easily done these days, as with stopping your credit card after its been stolen only diffrence is they could stop it until you get your shots up to date.Fight back dont buy anything corporate stuff their TV,stuff their insurance policys,stuff their corporaate shopping all where the sun dont shine.

Just finished reading -- wow. Pretty much sums it up in a surreal way.

Yes, this is a brilliant piece of forensic rhetoric - the entire farrago!

(Eerily similar to the "vaxocracy" world we live in today)

The leading character of the book … Guy Montag is a fireman. In his world, where television rules and literature is on the brink of extinction, firemen start fires rather than put them out. His job is to destroy the most illegal of commodities, the printed book, along with the houses in which they are hidden.

(In our world today, the vast majority of public health bureaucrats, media, medical professionals … voluntarily serve as "firemen" to silence any and all criticism and concerns questioning their fervent religious conviction that vaccines are truly manmade miracles. It is what they have been taught and well rewarded for believing. Indeed .. today's "firemen" believe themselves to be PATRIOTS protecting the HERD against any and all who dare question the MIRACLES OF VACCINES)

When will the madness end????