Can You Tell Me How To Get Off Sesame Street? 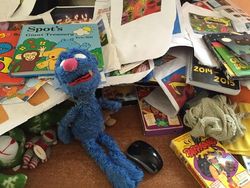 Like many of our adult children with regressive, vacine induced autism, my oldest daughter is, was and I suspect, always will be a Sesame Street girl. Her very first word was "Ober" for Grover monster. She carried a Grover plush that grew to resemble the Velveteen Rabbit, loved so hard he was threadbare but still in her eyes "furry and lovable." I used to mimic his voice for her to make her laugh. And laugh she did, with bright blue eyes focused on me and a smile that was brighter than the Street Lamp with the iconic sign on it.

Last year, the girls and I moved into our own little house. During the move, I had to make a decision. In the cellar, I had bagged and hidden all of my daughter's Sesame Street plush dolls. This included the giant Grover doll her father and I bought in 1996 in a toy shop in Peddlar's Village, in Lahaska, Pennsylvania. Gianna had just been born, and we took Mia out for a big sister dinner while my Mom watched Miss G at home. I remember thinking that Grover was so expensive. Little did I know he'd be a mainstay in our lives for more than 20 years. We got our money's worth and then some. We also had a giant Big Bird, purchased at Sea World in Cleveland in 1999. Another splurge for my girls.

I threw away the bag of plush. Goodbye Grovers, goodbye Big Bird, Ernie, Bert and Elmo. All of them. I threw them away.

I know that in order to move my kids forward, sometimes I have to be tough and - move them forward. My daughter now looks at old Sesame Street CD-ROM games regularly on YouTube. Where there's a will, there's a way.

My brother was born in 1970. We watched this 1974 episode of Sesame Street together, and I've seen it with my girls many times on Sesame Street Classics. Take a look at John John who appears at the end. He grew up. He has a career. He'll have a family. Maybe he'll watch Sesame Street on HBO with his own children.  But probably not forever.  Kim

Sesame Street now has episodes getting kids to line up and get vaccines. Those kids become their consumers for life.

"Liberal Predation" says Hotez. The reason why so many wealthy, educated, Afrian-American and Jewish families assert that vaccines do cause autism is because of "liberal predation". Dr Poling, care to chime in? How 'bout you Mrs Ealy? Dr Browstein? Dr Ross? Hotex is out there saying he represents the Black and Jewish community. I would like beg to differ if only I weren't so tired of begging.

Hello smiey face,Hello honey I`m ,home,Meanwhile back at tidmouth shed,Drat drat and double drat,and the list goes on these are some of the sayings G uses all from films cartoons he has seen usually WD.We try to incorporate them appropriately.Hello smiley face was from his school teacher who used to say it to him in a cheerfull,fresh and bright manner and similar tone of voice.The only trouble is G says it in one mono-tone and it could be the hangman greeting you!! deep voice one monotone
Hello - Smiley - Face :)

Mine too Aimee! Sounds like they could be twins! It is all Disney to this very day. Mine got all mad when Disney wanted to remake the little mermaid, anything other than a red head.
He loved Frozen I, and he has already looked up the story line for Frozen II.
He has a voice though, and I find to my surprise he is very thoughtful and clever with his speech, and still there is communication problems. I am confused about all of this? His voice as a child ; It came and went, stopped completely for a while and then started back in words and incomplete thoughts, to gradually improving. .

We are trying this hemp oil stuff now, for the first time. I have 55 purple cabbage sauerkraut jars fermenting down stairs . I threw out the grains of kefir cause it was killing me to keep it going; we are all now drinking the store bought kind, every day with out me fusing and pushing. That is so very nice.

I pray each night that there will appear like a miracle a job for him that he loves; and it just falls from the sky into our laps.

On the hemp oil, CBD oil; notice my right shoulder that I hurt pulling on my Dad's wheel chair this summer has improved with the hemp oil. I thought oh, no , hemp!!!! But I read the history of discoverer for CBD oil, so maybe this is an inflammation controller, a neuroprotector?

Kim-my adult son still watches Sesame Street videos on YouTube and looks at pictures of all the characters he has collected also on the computer. He enjoys watching it and laughs at alot at the funny things that Bert, Ernie, Cookie Monster, Grover etc. say and do. I guess it is something that they just enjoy seeing and I have always loved those videos myself as they are very well done and very creative. He still watches animated movies as well, which I also find to be very creative. I wish he could be like other adults his age and I never stop praying for a cure for all the adults afflicted by the vaccine induced autism they never should have had. I truly believe the answer for a cure will be found by the right researchers. God Bless you and your lovely daughters and let's never give up hope.

For my son, it's always been (and I suspect always will be) Disney. We have every Disney movie ever made, some in VHS and DVD. We have Disney puzzles, Disney games, Disney stuffed animals. He looks at Disney videos on YouTube. Although he has grown up to enjoy other cartoons (e.g. Peanuts), he is eagerly anticipating the Frozen II movie at Thanksgiving. He is 30 years old. He has some language, but for years fell back on Disney "scripts".

Communication occurs through many channels.

Our children are drawn to certain things as children, for sure. For my daughter, it was rubber ducks, at first. So many of them. An armada. Then it was the My Little Pony dolls, followed closely by the Littlest Pet Shop figures and their accessories. Then it was Pokémon figures and plush toys. She still loves Pokémon animals and recreates them perfectly in clay miniatures to this day. She also adores all things anime, and draws and recreates them in clay, miniatures too.

I did have to get my girl to move on, though, and what was acceptable to her was giving her toys away to other children to enjoy, so she would feel better about letting go of them. She has a few remaining Littlest Pet Shop toys, to serve only as a memory of the past. The importance that her toys have had in her life, however, cannot be understated. It was the original rubber duck that she insisted upon drawing with colored marker pens as her first attempt at art, her love of animals, in general, and her need to recreate them, in any fashion, in 2D or 3D, that cured her of her fine motor skill deficits, which were quite severe. Using her hands and fingers, every day, forcing them to work as she commanded them to work, is what fixed that problem, not the work of any physical or occupational therapist. My daughter remains compelled to do art. Art is her many hours long safe haven from the rejection by many of her peers who want nothing to do with her, and the lack of compassion she faces from a few of her teachers who lack insight into her kindness, her worth as a person/student, or even her intense desire for acceptance and for encouragement.

You did the right thing by throwing out those toys, Kim. Miss G will now be free to find a new obsession that will drive her forward. Her love of cute animals may inspire her in ways yet undiscovered. I know that all of our children have the following in common: They are wonderful human beings full of potential, potential that most likely will not ever be fully realized. I pray for every single one of our children, your beautiful girls included. I know all of our children are trapped, and they need to escape from their iatrogenically induced mental and physical prisons. Our children are "in there". It is a daunting and exhaustingly collossal effort to help to release them, and to help inspire them to release themselves.