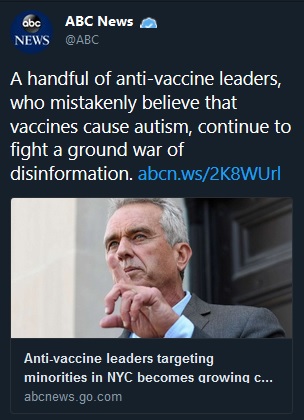 I was scrolling through Twitter yesterday morning and came across this Tweet from ABC News disparaging Robert Kennedy Jr for his work regarding vaccination.  Here is the link to the story on ABC Anti-vaccine leaders targeting minority becomes growing concern at NYC forum. Take a look at the hubris in the sentences below. The tone is dismissive in the extreme. You can hear the writers' (public relations that is) eyeballs rolling around their heads as if speaking to and about morons. It's classic pharma spin within a "news" organization that used to be a standard of excellence:

Like climate change, vaccine science is settled. By all conceivable logic, a medicine that prevents disease outright, rather than treating symptoms, should be universally embraced. Nonetheless, a handful of anti-vaccine leaders, who mistakenly believe that vaccines cause autism, continue to fight a ground war of disinformation, spreading propaganda to skittish new moms and dads and encouraging parents of children with autism to blame their children’s diagnoses on vaccines.

This is the event from which Al Sharpton bailed, by the way, instead of acting on behalf young African American children. I responded to their Tweet, as you can see in the image below.    Then I did a quick search for the day Robert's father was assassinated and found this video.  He was killed in California - the bellwether state for vaccination mandates in 2019. How is it the nation's news and political leaders, within the Democratic party particularly, the Kennedys' party, now openly scorn and ridicule Robert for his work on behalf of all of us? It's a disgrace. And it's dangerous too. I think this openly invites sanctioned violence. Make a person a threat and all bets are off.  "...a growing concern..." Nice to see Ethel standing behind him at the victory speech. She was an amazing woman.

The world sleepwalking in to pharma induced extinction. When everyone has been killed off, what will they do with all the loot/money. No doubt the, we were just doing our job, and we saved the planet from over population, will be used again and again by the seal clapping head nodding pharma and crypto-pharmas easing the burden when the kids and grand kids, ask what they did for a living. Funny how people who have been loss adjusters and worked for pharma keep very hush about it. Just found out that a middle aged couple not far from us used to work as loss adjusters and pharma but now they are Pharmers sorry farmers. Had me phooled for years ,not anymore..

Keep shaking them Mr Kennedy, they might wake up yet.Many thanks to you and all your team.

Worts this about?
Yes maybe like the Berlin Wall, the failing and harmful MMR vaccine is about to be demolished. Never mind. An ingenious new use has been found for the inevitable stockpiles of unwanted vaccines. Please read the comment threads below the article. I nearly died laughing!!

https://www.dailymail.co.uk/health/article-7674451/Could-MMR-vaccine-injected-warts-answer-banishing-unsightly-skin-growths.html
Quote:-
"A radical new treatment that involves injecting the measles, mumps and rubella (MMR) vaccine into warts could banish the unsightly skin growths for good.
New research suggests 70 per cent of warts completely disappeared within a few weeks of patients receiving four doses of the vaccine. The unlikely remedy could prove to be a more convenient alternative to over-the-counter wart treatments, which have to be applied daily and can take several months to work."

Take heart dear friends … consider .. the free world recently celebrated the collapse of the Berlin Wall .. which happened over night without any advance warning .. ending decades of East German tyrants preventing their people from fleeing their country to escape the proverbial POWERS THAT BE.

Not one major news outlet .. including ABC .. in the entire world foretold the wall was about to be stormed .. taken apart … brick by brick … allowing thousands to flee to the Western part of Berlin ..

As Jesse Jackson famously says: 'KEEP HOPE ALIVE' .. the unforeseen collapse of Berlin Wall reminds us that TRUTH WILL PREVAIL … the WALL OF SCIENCE protecting the corrupt vaccine industry can collapse OVERNIGHT … and ABC will AGAIN be responsible for failing to inform the people the collapse was imminent simply due to obvious signs … such as … 54% of today's generation suffering some type of neurological, biological, physical chronic autoimmune disorder .. up from 12% in recent decades … autism now 1 in 35 … special education for children growing each and every year ..

ABC must know the vaccine fraud is built upon a HOUSE OF CARDS .. and TRUTHFUL WINDS are blowing stronger and stronger every day.

Pharma is the new mob, and like his father before him RFK Jr is one of the few well known heroes brave enough to take it on, and Hotez is one of its most menacing king pins. Why doesn’t media ask the people in the so called “targeted” communities which scientists better represent their interests. If Hotez can tell Doctors Poling and Hooker and the thousands of highly educated parents that their children’s autism has nothing to do with vaccination I think high time someone start telling Hotez vaccines DID cause Rachel’s autism. Maybe her name should be written on the Vaxxed bus? The only predator I see is Pharma and that means YOU Hotez. Thank you so much RFK Jr for fighting for our children!

Is this the same ABC News that spiked a damning report about the Jeffrey Epstein sex scandal, and then had the employee who allegedly leaked the videotape fired? (It was probably someone else who leaked it.) Note that Hotez uses the word "predatory" to describe us -- but who here is protecting predators? Of course this article violates basic journalistic ethics: all the quotations damn "anti-vaxers", who are never allowed to speak for themselves. And far from being "targeted" by "interlopers", the Somali, orthodox Jewish, and Harlem communities all have plenty of indigenous vaccine skeptics, who invited some outside speakers in to address their concerns about vaccines. But the article does make clear that a huge, diverse, and passionate crowd attended the Riverside Church forum, and that fact alone may undercut ABC's efforts to manipulate their audience. Besides, after the Epstein affair, would anyone trust anything ABC broadcasts?

Thank you RFK,Jr . More than competent and capable of tackling the movers and shakers and pushers /traffickers, of the vaccine mandates, for vaccine junkies and dope heads!
Same problems,issues and difficulties in the UK .

Wow. The country has lost its mind. For the record, my application for nomination to USNA was on the desk of RFK in 1968 the day he was assassinated. I subsequently was inducted in 1969. My dad served in WWII. The Kennedy's were among our heroes. Yes, we had heroes in those days. They were imperfect ones. But, they were always seeking justice and the unvarnished truth. I am not afraid to challenge the groupthink of any "establishment" view.
The mere idea that "science is settled" is antithetical to what science is. There would be no Einstein or Theory of Relativity otherwise. Science is always subject to challenge by hypothesis.
The cowards of the media and of today's so called representative government are furthering their self-interests and not those of the American people.
Not every warrior has bought the "party line." Not then, not now.
Thank you RFK, Jr. "When you are going through hell, keep going."