NY Legislation: Will They Lock Up the Unvaccinated? 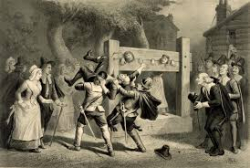 Note: We are careening toward a dystopian nightmare where the only demographic in the United States that can be bullied, hated, discriminated against, left behind and maybe even imprisoned will be the un- or under-vaccinated.  We protect every letter in the alphabet, no matter how small the group, how temporary the craze, except UV. It's vaxism. Pure and simple. This week is Halloween, I'm from Boston, Massachusetts, not far from Salem, where women were murdered because they were non-compliant. Witches. Have we really come that far?

The Salem witch trials occurred in colonial Massachusetts between 1692 and 1693. More than 200 people were accused of practicing witchcraft—the Devil's magic—and 20 were executed. Eventually, the colony admitted the trials were a mistake and compensated the families of those convicted. Since then, the story of the trials has become synonymous with paranoia and injustice, and it continues to beguile the popular imagination more than 300 years later.
Read more: https://www.smithsonianmag.com/history/a-brief-history-of-the-salem-witch-trials-175162489/#5DwTlTYbcIxwczml.99
Give the gift of Smithsonian magazine for only $12! http://bit.ly/1cGUiGv
Follow us: @SmithsonianMag on Twitter

New York is at it again. The legislature introduced Senate Bill A99 in January 2019; it is an active bill, still in committee. The bill was introduced as “An act to amend the public health law, in relation to the removal of cases, contacts, and carriers of communicable diseases who are potentially dangerous to the public health.” If passed into law, the bill would allow the government to detain and quarantine individuals deemed to be a threat to state and local health, which begs the question: Who determines an actual threat? And who really are the actual threats?

Rockland County officials banned unvaccinated individuals from entering public spaces over the summer and issued a follow-up emergency order to mandate the MMR vaccine for specific Brooklyn zip codes. The state seems intent on segregating the unvaccinated from the vaccinated.

The CDC defines an outbreak as three or more confirmed measles cases in a given catchment area of 100,000 people. At least two of the cases must be laboratory-confirmed, with a positive IgM antibody, showing the infection is acute in nature. Under SB A99, the unvaccinated could be detained and quarantined during an outbreak even if they are not infected. Westchester County in New York State passed a similar bill in September 2019, that allows authorities to use these methods against local citizens with no outbreak or case of infection identified.

A Lack of Transparency

Here is a section from the SB A99 bill:

“Upon determining by clear and convincing evidence that the health of others is or may be endangered by a case, contact or carrier, or a suspected case, contact or carrier of a contagious disease that, in the opinion of the Governor, after consultation with the commissioner, may pose an imminent and significant threat to the public health resulting in severe morbidity or high mortality, the Governor or his or her delegee, including, but not limited to the commissioner or the heads of local health departments, may order the removal and/or detention of such a person or group of persons by issuing a single order, identifying such persons either by name or by a reasonably specific description of the individuals or group being detained. Such person or group of persons shall be detained in a medical facility or other appropriate facility or premises designated by the Governor or his or her delegee to comply with subdivision five of this section.”

The bill references severe morbidity, but the evidence may not support that concern, judging from this year’s measles outbreaks. From September 30, 2018, through August, 2019, 1,114 New Yorkers contracted measles across a population of 19,542,209, which equates to a 0.01% prevalence rate. The outbreaks were concentrated in specific areas:

Whoever controls America controls the world..But we fight on.

2 historical points:
Massachusetts was originally called "The Mass. Bay Colony Company". It was a corporate charter from King George.
You also mentioned the "Salem Witch Trials". There's a very good book, - "The Devil in the Shape of a Woman", which goes into deep detail about *who* and *why* the targeted people were targeted.
Most were elderly widows who had been left large sums of money or property/real estate, by their late husbands. Thus, the "Witch Trials" were ALSO a way for certain rich and powerful men to get the women's money and property.
There's usually a hidden, or ulterior motive. NONE of the current Vax Hysteria is about "public health", it's ALL about CORPORATE CONTROL and PROFIT....
Both NY & Mass are heavily Democrat-controlled States, but that's just a coincidence, right....????....

Also under another bill in New York S298/A2912, a child would have to get the HPV vaccine to be able to attend public school or daycare that parent concerns were covered by the mainstream news. https://13wham.com/news/local/ny-bill-would-require-hpv-vaccine-for-children-to-enter-school-daycare

Denying exemptions to autistic children - School denies vaccine medical exemption to child with autism in New York- An 11 year old boy, who is profoundly autistic and non-verbal had a physician’s letter exempting him from vaccination requirements for several years, the school district now rejected their existing exemption and they are now suing. Their 11-year-old son had been a student at Monroe No. 1 Board of Cooperative Educational Services' Creekside school from the spring of 2016 until Wednesday, when he was formally barred from class. "So every year he's been at creek side he has had a medical exemption to be there, correct?" Yes. "And this year, the exemption was denied." Thats correct "Why did that happen?" We don't know. https://www.whec.com/news/school-denies-vaccine-medical-exemption-to-child-with-autism-parents-sue-nyss-top-doctor/5500362/ and https://www.democratandchronicle.com/story/news/2019/09/19/parents-sue-school-district-rejecting-doctor-excuse-vaccines/2372599001/

As the woman's book title declared: "It Takes a Village to Raise a Child" .. and … when it comes to vaccines …. many parents/grandparents like myself .... the "village idiots" are running the show.