Home Donate Contact Us Special Reports Science Subscribe by Email Subscribe to RSS Our Mission
Lupron Returns But Not for Autism
New York Board of Regents Monthly Meeting: Public Banned with Plywood Over the Door 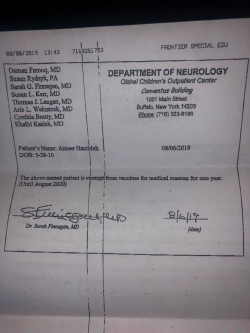 More than 25,000 New York schoolchildren have been expelled due to the revocation of the Religious Exemption. The Medical Exemption is completely separate. Or is it? Below is a story about a boy with Lennox Gastaut Syndrome who has an ME from his neurologist. And he is still being banned from school because a medical bureaucrat has ruled the exemption insufficient. Dr. Elizabeth Rausch-Phung is the Director of the Bureau of Immunization. Dr. Rausch-Phung is trained in Family Medicine.  And Public Health.  Here is her bio from the Association of Immunization Managers or AIM - insert your own joke here.  Dr. R-P overrode the decision of a neurologist and would probably override God himself if he wrote a medical exemption. Or would that be religious?

Dr. Rausch-Phung received her M.D. degree from SUNY Upstate Medical University in Syracuse, where she also completed an internship in Internal Medicine. She completed residency training in Preventive Medicine at the University of Michigan, from which she also received a Master of Public Health degree in Epidemiology. She is board certified in Public Health and General Preventive Medicine.

BUFFALO, N.Y. (WKBW) — 9-year-old Ameer Hamideh has been kicked out of school because he's not vaccinated. But his parents say getting vaccines could be 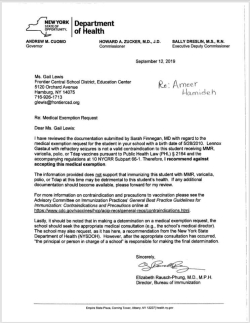 harmful to his health.

"He was vaccinated the first couple years of his life. After the vaccines, started getting seizures...his body couldn't tolerate it," said Ali Hamideh, his father.

The vaccines could make his son's seizures more severe and his son's neurologist backs up that claim, according to Hamideh.

"It would make it a lot worse, chance of hospitalization, even a chance of death," said Hamideh.

But under the new state law requiring all students to be vaccinated, Ameer was kicked out of the CHC Learning Center he attends.

Because of Ameer's condition, his father filed for a medical exemption and Sarah Finnegan MD, a local neurologist based in Buffalo, signed off on that exemption in August.  Read more at KBW Buffalo New York.

@davidL the irony is that this student is immune-compromised and should not be vaccinated -- he is supposed to be the reason for mandatory vaccines, to protect him via "herd immunity". Yet he can't go to school.

School denies vaccine medical exemption to child with autism in New York- An 11 year old boy, who is profoundly autistic and non-verbal had a physician’s letter exempting him from vaccination requirements for several years, the school district now rejected their existing exemption and they are now suing. Their 11-year-old son had been a student at Monroe No. 1 Board of Cooperative Educational Services' Creekside school from the spring of 2016 until Wednesday, when he was formally barred from class. "So every year he's been at creek side he has had a medical exemption to be there, correct?" Yes. "And this year, the exemption was denied." Thats correct "Why did that happen?" We don't know. https://www.whec.com/news/school-denies-vaccine-medical-exemption-to-child-with-autism-parents-sue-nyss-top-doctor/5500362/ and https://www.democratandchronicle.com/story/news/2019/09/19/parents-sue-school-district-rejecting-doctor-excuse-vaccines/2372599001/

Nevermind that autistic individuals display proinflammatory cytokine imbalances and overactive or dysfunctional immune systems, with chronic neuroinflammation, including microglia activation in the brain as well as lack of nutrients such as zinc and magnesium needed for the anti inflammatory response. And they want to coerce/force them with non live vaccines containing aluminum adjuvant that are proven to induce....more inflammation.

Rather have no state education than having a vaccine damaged or dead child,and if you have the S.I.D.S. bus parked in your house due to vaccines the maths aint hard...what next ban our bank accounts so we cant eat.

University of Michigan, is this what you teach?

We received almost the exact same letter from the IL Dept. of Health almost 15 years ago, overriding our physician's medical exemption for my son. Our letter was delivered along with a 2 inch stack of papers detailing the medical conditions in which a vaccine receptacle -- oops, patient -- would be exempt from each particular vaccine. Basically, the only medical condition acceptable for exemption from each vaccine would have been death within the past seven days of receiving said vaccine.
Defies all logic.
Wake up, adults in America -- you're next!

Surely this child is being denied his right to INFORMED CONSENT .. which is a hard earned HUMANITARIAN RIGHT … established to prevent exactly what is happening to him .. THE GOVERNMENT PUBIC HEALTH AUTHORITY IS OVERRIDING THE CHILD'S DOCTOR'S PROFESSIONAL OPINION THAT FURTHER EXPOSURE TO VACCINES MAY CAUSE FURTHER INJURY TO THE CHILD … INCLUDING DEATH.

This is EXACTLY what happened in Nazi Germany .. EXACTLY why INFORMED CONSENT was established as an INTERNATIONAL HUMANITARIAN RIGHT.

If parents can find no lawyers to represent the in the State of New York .. hopefully the parents will find someone who can represent them in the WORLD COURT where INFORMED CONSENT was established?