Does Vaxogynist Autumn Dayss Have Sleepless Nights Over her Mocking Sick Children? 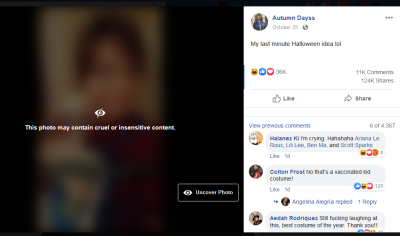 Cafe Mom ran a post about about women, #MeToo sisters who should be supporting one another, women who probably promote breastfeeding and are pro-choice are creating Vaxist or Vaxogynist memes that mock, disregard and bully in the old fashioned not snowflake sense of the words children who are vaccine injured. In a tiny bright moment, when I went to Facebook to seek the photo - it had a content shield over it. I am very happy about that. It deserve to have a warning. It's disgusting.

On what planet does dressing up as a Mom with whom you disagree become en vogue? Do stay at homes dress as working Moms to mock them? Do nursing Moms dress with babies drinking poison from a filthy bottle to stick a finger in the eye of formula moms?  Do pro-choice women dress as patients with  bloody coat hangers dangling out of their netherparts for fun?  Ha Ha Halloween!

WHY IS IT OK TO PORTRAY OUR KIDS AS DEAD?  Many ARE dead. They wander. They drown. They choke and gasp and seize to death.

When I was in third grade, I wore an adorable costume 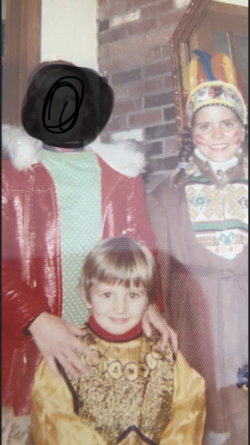 for Halloween - I was an Indian! That's what I called it. Today, we no longer use the term Indian, that's called progress. And a child wearing my get up might not be allowed in school parties. Even trick or treating might lead to raised eyebrows. Did I mean harm? Of course not. Was I mocking the Wampanoag tribe that was in my area? Of course not. Still. It would be seen as offensive today, and it was probably offensive to those with Native blood even back in the 1970s. So we no longer dress this way.

But it's not only OK, it's comedic fodder to make fun of vaccine choice, vaccine injury (they don't believe it exists) and families. Dead child! Skelebaby!!!

Here's a clip of the article. Feel free to pop over to CAfe Mom to comment. I've written for them in the past. I like a lot of their columns, even though standard parenting was never my life - because of vaccine injury.

And my name is Kim. Not Karen.

The image is, in a word, shocking. But then again, it's meant to be.

Many people left comments saying Dayss' attempt at humor went too far -- even if the message is important.

"Disgusting and heartless," wrote one commenter. "It’s NEVER okay to joke about anyone losing a child."

"This is just ugly," wrote another.

One woman called the costume "vile," adding, "Way to go putting your complete lack of class on display for the world. Your mama must be so proud."

Others were shocked that Dayss, whose profile previously suggested she's in med school, would post such a callous thing.

"It's disgusting to see a person that's supposed to be caring for all individuals joking about dead children," one person wrote.
Advertisement

Others, however, actually thought the whole thing was pretty funny.

For one thing, hundreds of users tagged their friends in the post, along with laughing emojis. Others commented that people who were outraged needed to "calm down" and realize that Dayss was just exercising a little "gallows humor."

"It's obviously a joke!" wrote one person.

"That’s so funny!" wrote one person. "Even though I am unvaccinated myself I still find it hilarious!"

Some were also shocked when Facebook marked the post as "sensitive," blurring the image and requiring users to request to view it first.

"All these sensitive Susan’s are killing me right now," one person said. "These comments! I love that it has to be covered now ... "

Many argued that the really horrifying part of this whole thing wasn't actually the costume itself but the parents who choose not to vaccinate.

Jonathan Rose, the media made the mistake in trying to shame an awareness campaign: https://local12.com/health/ohio-group-to-distribute-anti-vax-cards-with-kids-halloween-candy

I'm so tired of the lies and obsession and fear of "anti-vaxxers." Let's face it. Most of us wish that we had known the science. Then us ex-vaxxers would not have injured our children. And yes, vaccines kill children too. Neil Z. Miller's book summarizes 400 vaccine studies critical of vaccines. We know the ingredients. We know about the aluminum science, the 560 cancer causing genes in aborted fetal DNA in the MMR, Varicella, Hep A vaccines. We know there's no liability for doctors and vaccine makers. We know vaccines past and present are not placebo tested. We know about the doctors and scientists that show vaccines are neither safe or effective. We know about the CDC's committing scientific fraud with their 2004 MMR study. The dirty little secret is that the unvaccinated are healthier than the vaccinated. And that the vaccinated spread the diseases they were vaccinated for even when they don't show the symptoms!

Cecily wore an adorable Indian costume for Halloween in 2005, when she was five, easily available from a catalogue, and I wore one my mother made when I was nine, it even had a piece of cardboard to tie a doll on my back to be a papoose. Another year I wore a kimono that my uncle had brought back from the Korean War. NO ONE reasonable would criticize these costumes or object to them. Obviously these days reason is in short supply in many circles, but most people still have common sense and tolerance.

The woman in the photo only made clear that she's just another vulgar sl-t with no sense of compassion, fairness, or humanity. But she has the same right to free speech and expression that all the rest of us have. I'd say just ignore her. Or sure, put up comments criticizing her, as many have. It's just a flash in the pan. My mother used to say to consider the source and let it pass. This woman is a ******, obvious to all, ugly, exhibitionist, and a bully. I'd let it go. What could you expect from such a ***?

I’m seeing a new hashtag. “My child was injured by vaccines. (Insert your story here) #IAmKaren “

Obviously this kind of "humor" is profoundly sick -- and for precisely that reason, it backfired badly. Many online commenters who supported vaccination were disgusted by it. And it provoked a vigorous online debate about vaccination policy, which is exactly what the Dark Side doesn't want.

If you wonder how our hopelessly outgunned guerilla army manages to survive the overwhelming onslaughts of pharma, the mass media, the medical establishment, and the Gates Foundation, it may be because they commit one PR blunder after another. A while back Paul Offit recruited a handful of followers to jeer at the Vaxxed bus and got coverage in the Philadelphia papers. The readers of those papers would have learned that there is a Vaxxed bus (which they probably hadn't known before) and it is recording the stories of children badly injured by vaccines. Those readers might have doubted that those injuries were actually caused by vaccines, but they wouldn't have questioned that these children are desperately ill, and they would have been appalled that anyone would sneer at them.

I'd be interested to hear of the experience of others, but I for one have encountered very little lay public hostility to those who argue that vaccines can cause autism. Yes, we get a lot of vitriol from medical professionals , the media, and trolls. And yes, a majority of the lay public would disagree with the stance taken by AoA, but not many of them consider us dangerous fanatics who should be run out of town. We can mobilize thousands of supporters to publicly protest the rollback of vaccination exemptions; where are the mobs of protesters demanding the abolition of those exemptions? If Peter Hotez brought his message to Harlem, could he attract anything like the crowds who rallied to RFK Jr.? I have occasionally discussed vaccination issues in the classroom (without revealing my position), and the students have taken a range of positions, some pro and some skeptical, but all were willing to debate the issue with an open mind and respect for differing opinions. None of them ever said "There is no debate". And I personally know of no case of a child who was disinvited from a party because she wasn't vaccinated.

In short, I think the really intense hostility directed against us comes from the top down, not from the relatively tolerant grass roots.

KIM! It's since ceased publication, but for decades there was a national-distribution newspaper called "Indian Country Today". What the fake-news, lame-stream media will NOT tell you, is that most Indians either prefer the word "Indian", or use "Indian" and "Native American" interchangeably. Only the most radical/"progressive" use "Indigenous person(s)", or "First Nations", but that last is more Canadian. They like "Indian" because it's a reminder that white Europeans first thought, mistakenly, that Columbus discovered islands off the coast of India. What I find MOST disturbing about the post, is FakeBook finding it "disturbing", and adding that "filter". Yeah, personally, I find it offensive that a woman would "dress up" as a "measles-ridden child of anti-vaxxers". But I'm not gonna get emotional over it!
Yes, there are rich & powerful forces who are stoking the flames of hatred, fear, outrage, offense, etc.
They do it for 3 reasons, which are really pretty much the same thing, too. MONEY. POWER. CONTROL.
So-called "vaxxers" want to FORCE NEEDLE RAPE on people.
So-called "anti-vaxxers" don't.....
Which do YOU choose?
FORCED NEEDLE RAPE, or *not*....????....
KEEP UP the GOOD WORK