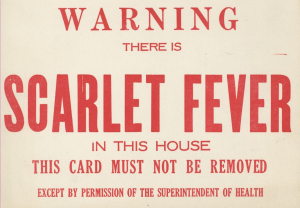 Vintage photo from http://sos.ri.gov/virtualarchives/items/show/736 with our thanks.

Age of Autism has reported on the increasing Scarlet Fever cases in the UK over the years:

Record Cases Of Scarlet Fever In The UK -- Is the Nasal Flu Vaccine Responsible? Part I

Record Cases Of Scarlet Fever In The UK -- Is the Nasal Flu Vaccine Responsible? Part II

Here we are, about a year later and the UK news is exploding with this:  New strain of scarlet fever-causing bacteria discovered amid surge in diagnoses

Some important quotes from the article:

And more details from the American media:


What that means -- “Strep A causes infections other than scarlet fever, and some of these are also on the rise in the United Kingdom, “ could be this ------ A tragic epidemic of death:

Twelve people have died in a "very serious" outbreak of a rare contagious bacterial strain, it has emerged.

Thirty-two people across Essex have been infected with the invasive, Group A streptococcal (iGAS) infection….Most of those affected are "elderly and had been receiving care for chronic wounds in the community and care homes", the report said…..

The CCG said the first cases were identified in February and it was discovered to be an outbreak in March.

Mike Bewick, independent chairman of Mid and South Essex sustainability and transformation partnership, said this was an unprecedented outbreak in the UK.

"There has been a slowdown of cases so far but it is too early to say that we have completely contained it," he said.

"We have had two in the last two weeks but we don't know if we have anymore as there is a lag time with testing."

He added it was a "very invasive and unusual organism" which they now recognised and he hoped that could save lives.

This is, as mentioned above, “unprecedented”.  First, epidemic cases of Scarlet Fever, with a mutated strain that is 9x more toxic, then deaths by sepsis of older folks.  What else has a connection to Strep?

We also need to add in this related concern, the increasing numbers of children being diagnosed with PANDAS as a result of Strep infections, like this young lad in the UK :

The youngster, now nine, has been diagnosed with pediatric autoimmune neuropsychiatric disorder (Pandas) which is associated with streptococcal infections.  It is an infection-induced condition that disrupts a child's normal neurological functioning, leading to compulsive or Tourette’s-like behaviour.

Doctors aren’t sure why normal childhood illnesses such as strep throat, chicken pox or scarlet fever in some children can trigger sudden onset of strange behaviour, such as jerks or tics, hyperactivity, mood changes, obsessive compulsive disorder  and refusal to eat food. Separation anxiety, trouble sleeping, night-time bed-wetting, and day-time frequent urination can also be signs.

A mutant Strep bacteria with 9x more toxins could be disastrous for those with a diagnosis of PANDAS or PANS. We know LAIV increases bacteria:

There is mounting evidence  that, “by altering the ecological niche and dynamics of phylogenetically distinct microbes within the host, vaccines may unintentionally affect transmission of non-vaccine targeted pathogens.”

Studies on other nasopharynx bacteria, after receiving  the nasal flu shot, continue to show that bacteria types and amounts increase but also could be transmitted to others, like streptococcus pneumoniae:

Live attenuated influenza vaccine (LAIV) nasal spray has been used in the United States since 2003, and it has reduced severe influenza disease in the United Kingdom since its introduction in 2013 into the national pediatric immunization program. In mice, LAIV vaccination increases the density and duration of pneumococcal colonization (2) and rates of otitis media. In children, LAIV is associated with increased rates and density of bacterial colonization (4). Although LAIV is safe and not associated with increases in pneumococcal disease, these data suggest that it could increase pneumococcal transmission to susceptible individuals (5).......Any effect of LAIV in children may therefore be more pronounced owing to lower antibody titers, increased viral shedding, and higher natural rates of pneumococcal colonization acquisition. Future vaccine studies should evaluate the effect on pathogens not directly targeted by the vaccine, including their onward transmission.

In trying to lessen the impact of influenza, is it possible that more invasive, mutant bacteria are being created?  If there is a chance, shouldn’t it be studied?

Someone, some country, some agency, some university, some thoughtful group of researchers might want to look at this as it seems very important. Actually, URGENT.

Discussing this and investigating it is not -- “anti-vaccine” -- but instead,  it is the ethical and moral thing to do for Mankind.

No wonder we lose. We don't give people any chance to fully escape the indoctrination.

Bacteria are no more or less common than before and they don't and never did cause sore throats.

Because the flu and diphtheria vaccines are 100% useless doctors have to blame other conditions when they see sore throats in vaxed patients.

That's all that's happened but Age of Autism instead just repeats the propaganda - propaganda that actually calls for more vaccination!

If you want to know what actually does cause sore throats you need to think about why an animal might need a sudden change in their ability to swallow.

Does the live but weakened virus in the nose vaccine give new genetic material to the ever present strep aureus? That is our new strain.

"Just because we can does not mean we should". Good quote.

Like any condition, there must be variations on the severity of PANDAS. I believe there are young adults who are affected by PANDAS whose symptoms were somewhat mild and passed off as peculiarities rather than pathological and were never treated. I wonder what this new strain of Strep will do to them?

All the `experts` bought and sold for pharma gold.Shame on them..

That is interesting that 2003 is when they introduced the flu nasal spray. That is when my children got Scarlet fever. My son went on to have PANDAS.