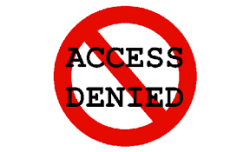 Thank you to John Gilmore of Autism Action Network for this summary of yesterday's decision from New York state.  Thousands of children on IEPs who are not 100% in compliance with vaccination requirements, and who used their religious exemption will be sitting at home instead of attending school. Public school. Think of the effect on their parents, many of whom now have to stay home from work. Think of the the drop in income taxes taken in by the state. Think of the teachers who may be put out of work as student numbers fall. Think of the injustice of denying an education to HEALTHY children in America for lack of.... a chicken pox vaccine?  This should be a voting issue in 2020 - the nation has stood up for the rights of every self-appointed cockamamie, yes, I said cockamamie, group in the alphabet - except NVC - not vaccine compliant.  Stay tuned.

The preliminary injunction was denied without hearing in V.D. v. State of New York, a case challenging the denial of school-based educations to special needs students with IEPs and 504 plans as a result of the repeal of the religious exemption from vaccine mandates to attend school. The following is the conclusion from the judge's ruling on the preliminary injunction:

"Plaintiffs’ children qualify for services under the IDEA, and they are entitled to continue to receive those same services if they return to school. Their status as children with disabilities, however, does not entitle them to an injunction banning the enforcement of a neutral, widely applicable state law. Plaintiffs’ objection to the repeal constitutes an affirmative choice to opt-out of public, private, and parochial schools—not a unilateral action on the part of defendants that interferes with or alters their rights under the IDEA. As a result, and for the foregoing reasons, they are not entitled to either a preliminary injunction or a stay-put order, and their motion is DENIED."

The denial of the preliminary injunction is not the final ruling for the suit. The attorneys are analyzing the decision and will comment later.

I know there's been a lot of (justified) anger over what's happening in New York and California. However, West Virginia and Mississippi also only allow medical exemptions. This has been true for a while. I wonder if families are leaving those states as well? Don't hear much about protest against mandatory vaccination in those states...

This decision doesn't recognize ANY medical grounds for exemption. I read several months ago that the vaxxers were saying that there WAS no medical reason for ANYONE to refuse vaccination. And from their point of view it makes sense. It has always been their weak spot that some are so immunocompromised that vaccines are more dangerous for them than for most. So their solution? DENY that there are any such reasons to refuse vaccination! Remember Julie Gerberding ten years ago, head of the CDC, who admitted in an interview that yes, in rare instances vaccines CAN cause autism? If she were doing it today, she'd just deny that they ever can.

So what the hell? If your goal is only to sell the maximum number of vaccines, why worry about details? So several hundred thousand are disabled for life by your policy? Easy. Just DENY it! Every day release a new invented gruesome detail about how deadly measles is.

I guess it's going to take several thousand more severe vaccine injuries to get those parents woke enough to take an interest in the issue.

IMHO this ruling turns the issue into human rights issue and it may end up at SCOTUS. That can actually help not only vaccine injured children and families in NY, but also in California, and even Maine.

This decision seems to accept that parents/guardians can simply opt-out of what I always thought was MANDATORY education? How does this ruling interact with that law? If a child happens to be fully vaccinated can his parents simply opt-out? Do caretakers who chose not to vaccinate violate the mandatory attendance laws? Are annual flu shots on the NY list?

I agree with greyone that many educated young families will leave New York as well as California due to this very unfair ruling that denies unvaccinated children the right to an education in those states. There may be other states that are also following the same route so families have to be sure before they move what the policies are in those states.

Aside from harm to the health of New Yorkers the enforcement of NY vaccination policy will do (injecting known carcinogens), the further maiming of the educational system, the deepening distrust of the governing majority, and the severe abuse of exercise of religion, there is a likelihood that educated young families will avoid or leave this state and its corrupted politics.
Many undesirable social consequences.

Schools depend upon federal funding based upon attendance. If enough children banded together & threatened to withdraw from the system go to homeschooling, could this force the state to reconsider? Glyphosate :a known carcinogen, mercury, aluminum, etc in vaccines is a program to harm the children..

Not chicken pox vaccine, but the measles vaccine.

It's so ironic that many of the pro-vax trolls comment that "everyone" should get vaccinated to protect those who, for health reasons, can't. Yet it's those of us who can't have vaccines for health reasons who are being forced!