Home Donate Contact Us Special Reports Science Subscribe by Email Subscribe to RSS Our Mission
ASAN Goes All Oscar The Grouch on Sesame Street
Best of: Alike but Different 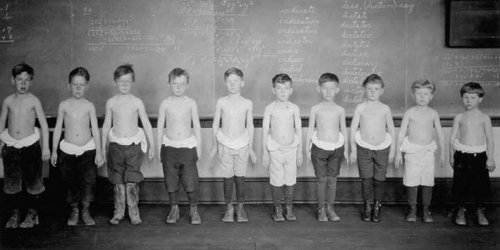 Note: Hell is for children, to quote Pat Benatar. Yesterday, today and tomorrow, there are children around the world whose fates are in the hands of rapacious manufacturers and scientists alike. The Alliance for Human Research Protection has written about a frightening story from my own home state, Massachusetts. Harvard and MIT scientists were testing how much radiation children could bear through America's very own breakfast staple, Quaker Oats.  How ironic that Quaker Oats was founded by a Christian businessman named Henry Parsons Crowell whose cereal was used for a diabolical experiment.

We see a similar laser-focus coming from pediatician (intentional sic) Richard Pan in California, architect of SB277.  And in Dinowitz in New York. Their zealotry for full vaccination with no ability or willingness to see the harm they are causing mirrors these horrible experiments. The children do not matter in their black and white world. It's the concept of full vaccination that matters.

In 1944, Joseph Mengele was conducting experiments on human subjects in the concentration camps of Germany and America was repulsed. Yet right in the seat of America's liberty, Cambridge, Massachusetts, MIT and Harvard were equally evil in conducting experiments on marginalized Americans will no perceived value. "Morons" euphemistically sanitized by calling them a "science club." A club without parental consent. Sound familiar? Do you think times have changed in 2019? Do pharmaceutical companies conduct experiments on children today? Yes. It's called the pediatric and obstetric vaccination schedule. Plus ca change.

Absolutely horrible. Merck pharmaceuticals was acquired after World War II from Germany as reparations. I can't imagine how many children are getting mass vaccinated in the border refugee centers. They are a captive audience.

Oh, so that is how we know what little we know about the absorption of calcium in the body! I should have known it was not through animal studies.

Just like we know what happens at each level of increase in radiation exposure to the human body. Fort Mitchell and the big medical hospitals of Cincinnati, drew unexpecting Appalachian women that had breast cancer, by expressing hope for these women. It had nothing to do about curing these women.

If we’re calling them concentration camps, why is no one concerned with what is being injected into detained refugee children?!

The Saturday Review editorial, "Human Guinea Pigs and the Law,"
(6 October 1962, p. 55) expressed the same concern for individual rights,
opening with a reiteration of the first rule of the Nuremberg Code,
which stated that human subjects most give consent voluntarily. The SR
went on to complain about the attempts of the drug companies and the
medical profession to quell debate about this issue and to call on
Congress to pass legislation to protect the patient's right to be
informed of the nature of her medical treatment.

Here we are today--2019-- and the "medical profession" is by far the loudest voice (and the Drug Industry behind the scene) for removing, violating the Nuremberg Code of Informed Consent.

As I said Nazi doctors wore white lab coats too.

The more things change, the more they remain the same.

Hell is for Pharma and sing! and they know it..

Great song from Pat based on her own abuse no doubt.

The children in the photo look a lot younger than teenagers to me. And they certainly don't look like "morons". I recently came across a case reported on the BBC in which a women was described as being in the bottom 10% in terms of intelligence. Yet she was described as using a phone, bringing up a child single-handed, writing and even driving a car!
On the subject of experimenting on children, this was being done by Borough's Wellcome at that time, using vaccines on Irish orphans. I suppose we should be disgusted but not surprised.

I would advise anyone who is outraged to learn of the CRIMINAL exploitation and experimentation on the most vulnerable among us .. innocent children identified as "mentally retarded" .. by SCIENTIEST of prestigious universities .. MIT and Harvard .. should take the time and view the entire 9 hours of sworn testimony by Stanley Plotkin .. world re-known as the GODFATHER OF VACCINES .. or .. read all 128 pages of that same testimony on line.

Q:: Have you ever used orphans to study an experimental vaccine?

Q: Have you ever used the mentally handicapped to study an experimental vaccine?

A: I don't recall specifically having done that, but that in the 1960's, it was not unusual to do that. And I wouldn't deny that I may have done so.

Q: Have you ever expressed that its better to perform experiments on those less likely to be able to contribute to society, such as children with handicap, than with children without or adults without handicaps?

A: I don't remember specifically, but its possible .. I've since changed my mind. But those were, that was a long time ago.

Q: Do you remember ever writing to the editor of "Ethics on Human Experimentation"?

A: I don't remember specifically, but I may well have.

Q: (Presented with exhibit 43) Do you recognize this letter you wrote to the editor?

Q: Is one of the things you wrote: "The question is whether we are to have experiments performed on fully functioning adults and on children who are potentially contributors to society or to perform initial studies in children and adults who are human in form but not in social potential? I may be objected that this question implies a Nazi philosophy, but I do not think it is that difficult to distinguish nonfunctioning persons from members of ethnic, racial, economic, or other groups.

Q: Have you ever used babies of mothers in prison to study an experimental vaccine?

Q: Have you ever used individuals under colonial rule to study an experimental vaccine>

Q: Did you do so in the Belgian Congo?

Q: Did that experiment involve almost a million people?

The testimony than proceeds with a question: Do you believe someone can have a valid religious objection to refusing a vaccine? A: No … Q: Do you take issue with religious beliefs? A: Yes

Enough … the testimony continues and clearly shows the absolute MORAL AND ETHICAL bankruptcy of the WORLD'S PREMIERE VACCINE EXPERT.

Obviously .. MIT and HARVARD are no more guilty of CRIMINAL EXPERIMENTATION ON INNOCENT .. UNINFORMED PEOPLE .. than their hero DR STANLY PLOTKIN.