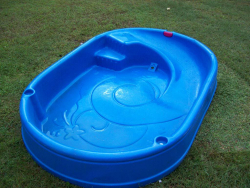 I went to the pool early one evening with 3 of my kids over our summer break.  We’d have loved for him to join us, too, but Ronan stayed behind.  Previous summers had him at the pool quite a bit.  He’s not interested in swimming as much as he used to be though.  He preferred to stay comfortable and inside that evening, so I left to take a quick dip in the pool.  Ronan can be flexible during vacation time, but why rock the boat?  He was happy, and when he’s happy, we’re happy, too.

With Ronan not being there and with me not needing to constantly supervise him, I was able to actually swim at the pool.  I did that and also enjoyed watching my other kids play.  Each of them, including Ronan, are like fish to water.  It was so encouraging to see them have fun and to see them be so confident underwater.  When the kids swam to the deeper end, I floated around on my own.  That’s when heard something interesting.

An older woman was talking with a couple who’d mentioned they had college-aged kids.  Maybe she was hard-of-hearing and couldn’t tell how loud her voice carried across the water, or maybe she didn’t care that other people beyond their small circle could hear her, but this older gal kept talking and talking.  Those of us not in earshot couldn’t help but hear what she had to say.  The more she said, the more I wanted to be part of the conversation.  I floated by and heard her mention Sharyl, as in Sharyl Attkisson. Slowing myself, I treaded water near these 3 people.  That’s when the older lady mentioned another name, Dr. Zimmerman, and continued to share that, as a retired pharmacist, she’d seen a lot.  She'd read a lot, too, including taking time to read about something called vaccine court.  ‘Why would a vaccine court exist if vaccines were so safe?’ she asked.  I nodded my head in agreement and said softly, “She’s right”, and swam closer to the group while preparing to introduce myself.

I’d have to wait.  The retired pharmacist had much more to say.

‘Look at how many shots kids are getting now also.  Of course, times have changed and medicine has advanced.  But at some point, you have to listen to the parents.  Something’s happening to their kids after they get all those shots.’

“I couldn’t agree more,” I interjected while the gal waited for the couple to reply.  They didn’t say anything, so I continued, “I'm one of those parents, and my son is one of those kids.”

No one spoke, but three sets of eyes now stared straight at me.

Before adding anything else, I asked myself, Do I keep talking, or do I sheepishly swim away? Years ago I never would have said anything, but as time’s gone by, I’ve gotten more vocal with complete strangers when vaccines come up.  Another minute went by with no one talking, so I took the chance and continued.

Looking at the older woman, I said, “I love Sharyl's investigative research and really appreciate what she reported.”  I added that not only is she thorough in her news reports, but shared how brave I thought Sharyl was, especially with all the censoring we've witnessed in corporate news outlets.  “She’s shed light on things that the mainstream media won’t touch.  If more people spent time reading up on the topic, like that vaccine court exists, parents may be able to make different decisions about vaccines.  Our doctors didn't tell us much when my son was being vaccinated, nor after he was injured by vaccines.  I learned what I needed to know too late and only after reading on my own...like you mentioned you did.”

‘It's incredible what I’ve learned,’ the older lady offered.

She’d read about the payouts and cited some government statistics.  Impressed, I looked to see what the couple thought.  I hadn't noticed, but the couple this woman had been speaking to before I chimed in had floated to another area of the pool.  I smiled in their direction, but didn’t get a smile in return.  It seemed that they were happier away from the conversation that I’d been drawn to.

Maybe they weren’t interested.  Maybe they were naysayers and wanted to be polite and not start an argument with this older woman.  Whatever their reason to float to the opposite side of the pool didn’t bother me.  It wouldn’t be the first time someone ignored me or vaccine facts, so, I turned my attention back toward the retired pharmacist and continued to listen to everything she had to say.  I was happily surprised to hear her share information and research that was so familiar to me.  She knew so much.  She knew that some ingredients could be toxic to young children, she knew that studies were not as sound as the government claims they are, and she said that vaccines could be useful for some in some populations but were unsafe for others.  All the while, she made no mention of having a personal connection like having any grandkids with autism or with a vaccine injury.  Regardless, she was definitely intrigued with what she’d learned and wanted people to know all about it.

My kids were almost finished playing and started to swim toward me.  The lady asked their ages and asked how parents with vaccine-injured children handle school entry.  It was my turn to offer some useful information.  “In some states, parents have access to exemptions.  I wished more people, especially young parents, knew that.”  I started, “But look at what happened in California with SB277 with their existing exemptions.  They were taken away.  Look at what they’re doing now with SB276.  The newer vaccine laws aren’t protecting the people - they are taking the peoples’ rights away and so quickly, too.  It’s not right.”  She nodded.

We talked a little bit more about what parents can do when their kids react negatively to vaccines, but she knew, because of the reading she’d done, that parents can’t do too much.  The doctors administering the vaccines and the pharmaceutical companies making the vaccines cannot be held liable, and the government will work overtime to deny any wrong-doing.  Before leaving the pool, we agreed that the data could be complicated, but if someone wants to know more than what their doctor is saying about vaccines, information is still available for anyone to read, including parents and curious retirees.  There was so much more to talk about, but my kids were ready to go.  Night would be falling soon anyway, and I needed to get back to the rest of the family.  Smiling, we shook hands and I thanked her for taking the time to share what she did.

Some days I feel like I'm drowning, but every now and then, I run into someone who breathes some life back into me.  That’s exactly what I felt when I happened upon this older woman one random evening this summer.  I don’t know if I’ll ever have the chance to see her again, but I hope she continues to speak up about what she now knows to be true - that what the government is telling the public about vaccines isn’t true.  Vaccines can cause problems.  Vaccines aren’t safe for everyone.  And the people have no recourse when something terrible happens because of them.

Sounds like the older lady is part of the 45% and growing adults who have doubts about vaccine safety.

BREAKING NEWS from the pool and Cathy Jameson was there to report it. Did you have to fight other reporters to scoop the story?

As more are vaccinated more are harmed and more start to question what they seen rather than what being told bythe pharma minions.Their main thing is to try and stop discussion.

I seen today the democracy umbrella protesters protested again, 1.7 milion of them-and the press try to spin it as the umbrellas were there to stop them getting wet from the rain -well n-o-p-e. Try Anti-government water canons,anti-government camera surveillance,anti government attacks from police batons useful thing an umbrella on a protest as we all know the modern day shield.

Great pictures..
A sea of umbrellas in Hong Kong: 1.7 MILLION pro-democracy protesters defy Beijing despite fears of a Tiananmen-style crackdown

Just the sort of encounter which gives us all hope that the criminals destroying the nation will at some point be held to account. I've had a few of these encounters myself, and they make my day. Sharyl Attkisson is about the only journalist with integrity who still has a mainstream media platform. I deeply appreciate her good work.

Great post, Cathy. It is so good to hear reports of informed people who did not find the truth after an injury.

Thank you Cathy, and thank you to that pharmacist. I wish more people could have this discussion without the vitriol.

"Some days I feel like I'm drowning, but every now and then, I run into someone who breathes some life back into me."

Don't get out as much as I used to .. have less opportunity to "run into someone" who encourages me .. but … I have to admit the growing numbers of people showing up in public demonstrations .. world wide as shown on a recent Del Bigtee excellent "Highwire" show .. Italy, Poland, Spain .. as well as our own country in LA, NY, Maine, etc … is very encouraging to me.

So much so .. I think the tide is beginning to turn against the government's use of COERCION AND CENSORSHIP to promote vaccines .. while at the very same time REFUSING TO ENGAGE IN PUBLIC DEBATE ON THE GROWING EVIDENCE OUR CHILDREN ARE THE UNHEALTHIEST IN OUR NATION'S HISTORY.