Home Donate Contact Us Special Reports Science Subscribe by Email Subscribe to RSS Our Mission
Best of: Dear David of 1932: What Factors Led to Your Autism?
Challenge Accepted! College Application Essay from an Autism Sibling.

The Neurodiversity Movement Should Acknowledge Autism as a Medical Disability 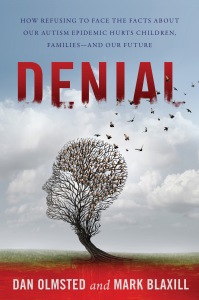 Note: We excerpt this opinion piece in the Scientific American blog for your review. The content is indeed in keeping with the POV of many (most) of us at Age of Autism. I wish the author had referenced Mark Blaxill and Dan Olmsted's book, "Denial How Refusing to Face the Facts about Our Autism Epidemic Hurts Children, Families, and Our Future," which attests to and delves into the severe damage done to progress for autism by the neurodiversity movement in its political and media driven form.  We want pride for our loved ones on the spectrum, and our readers on the spectrum. We respect their right to feel a connection to their autism, just as a hearing impaired person feels part of the "deaf" (I apologize if this is the wrong word usage today) community. To deny the right to change, improvement, amelioration of negative aspsects of the diagnosis, medical care, safety legislation and housing choices that meet the needs of the range of the spectrum is akin to saying you are a feminist, but ONLY the most radical, "boys are stupid throw rocks at them" version. This isn't the American way. We are a nation of free choice. We're supposed to be, at lease.

The Neurodiversity Movement Should Acknowledge Autism as a Medical Disability

By Yuval Levental on July 17, 2019
Yuval Levental is an autistic individual who critically analyzes autism advocacy. Follow him on Twitter @YuvalLevental.

The autism researcher Simon Baron-Cohen published an article, “The Concept of Neurodiversity Is Dividing the Autism Community,” where he defends the neurodiversity perspective. There are several specific arguments in his article, but overall, he views autism as a biological difference, not a disability.

Aiyana Bailin, a disability rights advocate, wrote a response titled “Clearing Up Some Misconceptions about Neurodiversity,” where she claims that while she supports neurodiversity, she believes that autism is best understood through the social model of disability. This means that the negative aspects of autism are caused by a lack of external accommodations, such as in improper work environments.

Advocating for medical research, former president of Autism Speaks Liz Feld has stated that one third of people with autism also have a seizure disorder, half suffer serious digestive complications, 49 percent wander, and more than 30 percent are nonverbal. Feld claims that no accommodation could solve those specific difficulties, and that they interfere with their quality of life. In 2018, the National Council on Severe Autism was founded to take action regarding those concerns, with its founder, Jill Escher, stating that “For countless families devoted to the well-being of their disabled loved ones, the daily challenges can be overwhelming, and the prospects for the future extremely bleak.”  Read more and please comment with a suggestion to read Dan and Mark's book at the SciAm site here.

I completely agree with this piece. However, the author Yuval Levental has also made it his mission to discredit RPM and autistic people who use RPM, so I can't really see him as an ally.

Maybe this is not the best forum to throw my advice in, but nevertheless - I will try.
Non-verbal autistic children (and adults) is a really tragic phenomena, and it cripples people with autism even more. My son has lost his developmental milestones and communication at 18 months, as many of our children. But he also lost his hearing. He was diagnosed with profound and progressive hearing loss at at 2.5 y.o. And it turned out to be a blessing in disguise.
I / we pursued the avenue of oral deaf education, specifically - the AVT (Auditory-Verbal Therapy) After losing his speech and eye contact completely, he was specifically taught to listen and speak, and started re-gaining speech slowly at 5 y.o or so. He is completely deaf now, with bi-lateral cochlear implants, but he is speaking and listening, and was able to graduate from High School with a diploma, and is pursuing higher education. It is possible that he became verbal again entirely due to the oral deaf educational track. My son's AV therapist now has more autistic clients than deaf...
I am not saying every autistic child can learn to speak. I am saying mothers may want to try another venue - education for the deaf. There are some specific techniques that are also used with brain injury victims. Anyway - you may want to contact me directly for more information.
What I am trying to say - autism, even non-verbal autism, can be improved upon, if not cured.

Pogo, I was so happy to see ICD-10 Code: G93.40 listed on a recent lab order for my son (and E88.9). I felt that I had finally found someone who was paying attention. G93.40 is vague, but it is better than anything offered for code F84.0 (the only code used throughout my son's youth). I would recommend doctor shopping. I think F84 should be reserved for the neuro-diverse cheerleaders - who don't want a cure. In my opinion, no cure, improvement or change is guaranteed with that diagnosis code.

Ah! Think I have found a suitable place in the forth coming ICD -11

From what we know and understand today I would think that the type of autism that concerns us here, should be regarded as an “immunological/neurological dysfunction”.

The current International Codex of Diseases (edition ten) places it at F840 and as a neurodevelopmental disorder. Also it is the preserve of psychiatry.

Psychiatry has nothing in its tool box to aid the healing of people suffering from vaccine damage and thus this condition should rightful be renamed and be moved into neurological disorders – G93.

However, the current ICD 10 is being rewritten. The problem I see with finding a suitable place to put it is the lack of evidence regarding any neurological etiopathogenesis for a vaccine damaged syndrome. All we have is the etiology and pathophysiology or to put it in English; The cause was injected substances and the disordered physical processes involves the brain and immune system.

It would require a new name, for the ICD does not allow for the same name to appear more than once in the index — and I think we would be glad of it being given a different label.

As Jean-Luc Picard was so fond of saying “Make it so!”

There's a couple of important points raised here, I think. First, the so-called "neurodiversity" "movement" sounds good, it's all "progressive", and "inclusive", and it's the latest thing, as all the main-stream media and big-money "awareness" campaigns tell us. Which means it's also a form of brainwashing and propaganda. It's a way for the super-rich, and various governments and foundations, to all further control, manipulate, and profit from our suffering. It's too often a wolf in sheep's clothing.
Secondly, please understand that I'm an "autism ally", so let's stay both friends, and friendly, ok? I cringe when I hear ANYBODY talk about that "spectrum", or being "on the spectrum". Remember, there IS NO SPECTRUM! The "spectrum" is a construction of words and language. "Spectrum" started as a scientific term. The "spectrum of light energy", or the "electromagnetic spectrum" are 2 examples. But when we start using words such as "spectrum", in connection with "autism", or "aspberger's", we're running the risk of confusion, and mis-communication. Using "spectrum" with autism can help us understand, and deal with autism. But there's no way to prove this supposed, so-called "spectrum" even exists, or where any person may, or may not be on this spectrum. How do we know exactly where this spectrum begins, and ends? Who is the person who is the MOST FAR towards the "end of the spectrum". We all like to think we are experts, who know everything there is to know about whatever the topic is that we're experts on. But I think sometimes we need to stop, and think about what it is we are thinking about, and talking about. Sometimes, we realize that we really do know more than we think we do. But other times we realize that we're not so smart after all! That's my "2cents Tuesday"!
KEEP UP the GOOD WORK, people!