GAH! Another Anti-Shot Article! About Botox?

Note: Thank you to AofA reader Carolyn for this article that we share NOT because any of us is growing old enough to even consider such treatments as Botox, instead because if this article were about MMR or any other vaccine failure, it would never make a mainstream article  like this one.  In a nutshell, some people develop an antibody response to Botox injections (remember, the Bo in Botox is not for Boston, bologna, Bosco or bouquet, it stands for Clostridium botulinum type A.) The response negates the effectiveness of the shots.  One sentence stands out to me - The patient's own antibodies were never questioned, and so the typical protocol at that point is to simply offer more injections.  Cosmetic surgeons recommend Botox "Booster shots" after product failure.  Sound familiar? Doesn't work? Get more! At any rate, I thought this 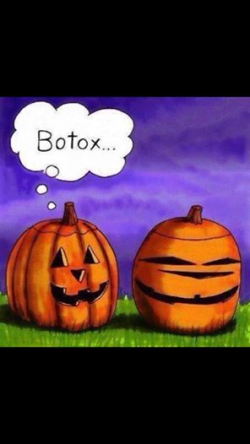 was an interesting summer read. Now, shall we discuss Sunscreen?

But what if Botox simply doesn’t work for you? Some have had success with their first, second, and sometimes third treatments with Botox, only to reach a point where the effects are either greatly diminished or entirely absent. Others appear to be immune to the effects of Botox from the start.

Why It’s So Frustrating When Botox Doesn't Work

It is a little-known fact that some people can become resistant to the effects of Botox. It was once thought that the product wasn't working because of improper storage, or injector error involving not using the correct technique or dosage.

The patient's own antibodies were never questioned, and so the typical protocol at that point is to simply offer more injections. As a result, the immune patient then ends up spending even more money on a treatment that just doesn’t work for her.

What the Makers of Botox Say

Since the explosion of Botox use, researchers and doctors are realizing that resistance to Botox can develop and, even that there may be some who are completely immune to its effects. According to a representative from Allergan, the company that makes Botox:

“Occasionally some patients may develop an immune response to BOTOX/BOTOX Cosmetic that may reduce the effectiveness of treatment. This is because BOTOX/BOTOX Cosmetic is a protein complex, and in some patients, the body’s immune system may respond by producing “blocking” (or neutralizing) antibodies capable of inactivating the protein’s biological activity. Antibody formation is more of a concern when patients must receive frequent injections or when it is used to treat medical conditions such as cervical dystonia that require higher doses. However, recent long-term studies have indicated immunogenicity to be a minor concern even with that treatment. Both the BOTOX/BOTOX Cosmetic labels (attached) advise that the potential for antibody formation may be minimized by injecting with the lowest effective dose given at the longest feasible intervals between injections.”

To put it plainly, Botox resistance (immunity) is does occur in some patients. According to those who do recognize the phenomenon of Botox resistance, the numbers are low — about 1% to 3% of patients who are injected will develop toxin-blocking antibodies. Still, with millions of Botox injections being given every year, this number is not insignificant. Read more at VeryWellHealth.

Botox has been used for some years for alleviating constant migraines and has a pretty good track record. Not pushing it, just informational.
Maurine

...and if the "bo" stands for botulinum, one can just guess what the "tox" stands for.

Obviously, though BOTOX is a "protein complex" and occasionally some patients may develop an immune response that "blocks or neutralizes antibodies capable of inactivating the proteins biological activity" .. BOTOX IS NOT A VACCINE .. therefore nothing to worry about .. as we all know VACCINES ARE MIRACLES … where "blocking or neutralizing antibodies capable of inactivating proteins biological activity" cannot occur.

Aren't we the lucky ones to have such kind, caring and wise experts looking out for us?

Chill botox users just chill, one thing for sure its not the jab-never!.