Note: Our Anne Dachel has been cataloguing the demise of the pediatric brain for over a decade at Age of Autism. Our children are sicker than ever and increasingly incapable of functioning in a traditional American classroom. Behavior plans replaced weekend plans with friends.  Detention is a quaint remnant of another era, as arrests and calls to "211" have become the norm. Teachers find themselves needing to learn how to block, place a student into a submission, and restrain as if the classroom as become the Octagon.

Here in Connecticut, we have "PMT" training for educators.  It's supposed to support safe interactions during a behavior. But when there is violent aggression, staff are woefully unprepared. The result is more injury to staff in school. And that's never acceptable. At the same time, as a parent of three daughters with special needs, I know that restraints and submissions can maim, wound and even kill - think sleeper hold. It happens.  I teach martial arts. My Sensei and I have a class called ASD - Autism Self Defense, for families. The problem in schools is that teachers and staff can not use techniques that really work - that send a message. Stop. And let's face it, as parents we do not want them to touch our kids - not on a bet.  The answer isn't martial arts training for staff - that's ridiculous and would take years for any training to take affect.

But training is an issue - and discussed heavily in the article for Oregon which is part of a series. However, the real problem is this:

“Have mental health people, have counselors so we don’t have to pull staff from other assignments,” said Winters. “Because that’s what happening right now. Principals are being pulled, other assistants.”

Why the increase in disruptive behavior?

There are several theories on why disruptive incidents are on the rise in Oregon classrooms but no in-depth research on what’s causing it.

Teachers say more trauma at home and less support in schools are the most obvious factors.

I call horsepucky and I know you do too. Trauma at home? Chances are the parents and siblings of these students are the ones facing trauma. Less support in schools? Nonsense - kids have 1 to 1s, lunch bunch, social worker teams, school psychologists, counselors and far more mental health support than any school ever imagined necessary. What's changed:

o Tampering with the brain in utero with vaccinations, ultrasounds, medication and interactions at birth

o Tylenol at the first sign of any and all discomfort, including at vaccination visits

And I'm sure there are many more suggestions. Feel free to share them.

Here's an article that is part of an excellent series from Oregon.  Thanks to Laura Hayes for sending it to me. Teachers are not working with teachable material, "normal" children, like their predecessors who taught our parents and grandparents and yes, most of us. Education is Ore-going, going, gone.

PORTLAND, Ore. — Teachers across Oregon say they are seeing outbursts and disruptive behavior from students at an unprecedented rate and the alarming trend has caused many of them to question if they can continue to provide a safe learning environment.

Teachers describe verbal, physical and sometimes violent outbursts in elementary schools. They say the incidents aren’t limited to classrooms focused on students with special needs but affect all classrooms. 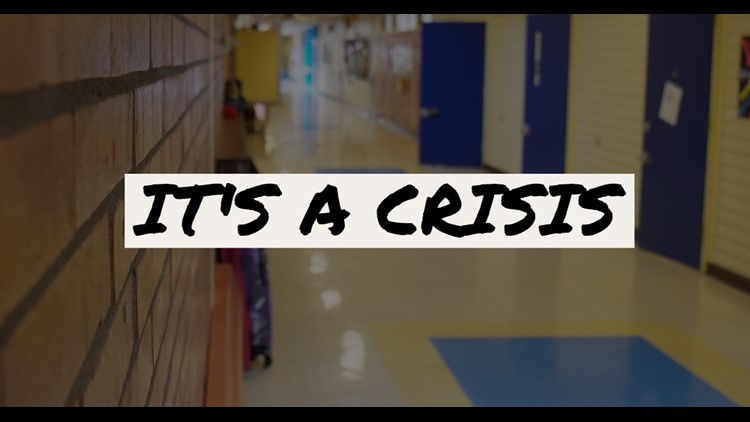 The outbursts from students are so commonplace that kids don’t go home and talk about it anymore,” explained first-grade teacher Melinda Ryan.

Ryan was one of the teachers who joined KGW for a frank conversation about classroom disruptions. They came from the Portland, Beaverton, Hillsboro, Gladstone and North Clackamas school districts.

“Generally, we’re unable to teach because there is so much behavior sometimes from the morning until the end of the day,” said fourth and fifth-grade teacher Cindy Honma.

They talked for nearly an hour, describing the intense meltdowns happening in their classrooms.

“They are throwing furniture, they are running through the building, going to the office and throwing chairs at windows and it’s really intense,” said Ryan.

The incidents sometimes lead to students or teachers getting hurt.

Please take the time to read and RESPOND to the series out of Oregon here.

I have never of so many kids acting out as we see today. The girls are aggressive and fighting, something we did not see in our childhood. They always blame the parents, but poverty and despair in families has always been around. Just another thing to blame the parents for. The kids are so damaged and the drugs they are on are one of the problems. Food additives and chemicals used on produce, and vaccine ingredients, another insult. Besides the toxic level of mercury and other toxins injected into them by vaccination, lead has risen it's ugly head again. In toys and many products coming from overseas. The doctors of course are not checking for metals. Just another customer for the psychiatric drugs, their answer to everything. The pediatricians have failed out children miserably.

I wonder if the PDA subset of ASD is causing most of the problems in schools. Not being officially recognized as such means teachers are not trained to handle/prevent outbursts as they don't respond the same way as typical ASD students. The incidence and prevalence is unknown so it can not be determined if PDA is increasing as a percentage of ASD or not.

In any event the reasons for the increase in ASD of all types are likely to be multifactorial. Increasing vaccinations and EMR exposure both correlate with increasing ASD. It may well be that EMR actually enhances the damaging effects of vaccines containing mercury and aluminum as it reduces the ability of cells to clear toxins/metals from the body.

There are of course other environmental toxins, glyphosate, GMO foods, gene edited live stock, pharmaceuticals to treat chronic illnesses, etc. We can only guess as none of these has been adequately tested

One cant dismiss increasing poverty. Economic statistics are massaged to hide the fact most Americans living standards have been declining over the past 30 years, which means tough times at home financially and more stressed parents. I don't think its the main factor, but its certainly a factor.

I'm reminded of some information I got from the National Autistic Society, in which the section on schools advised teachers to "Avoid escalating power struggles". Much later, I saw a film about a school for autistic girls, in which the Head teacher kept telling the girls that SHE was in control! One teenager was crying in despair because she was being forced to play tennis. Why does an autistic girl have to play tennis?! Who knows what pain or discomfort she might be suffering and unable to explain? I'm afraid this is too often the attitude to autistic children now - they have to be controlled - not loved, encouraged, helped and, yes, accepted! I'm not saying this is the only problem in this situation, but it's another aspect of it, and maybe people should think about meeting the autistic kids half way. School is too much about social control, of all kids, and I think autistic kids find it hardest to cope with that. This is one of the main reasons why autistic families often choose to home educate.

Oregon, like many states, is experiencing a drug crisis. Addicts cannot properly parent and often expose their children to violence in the home. Yet, you did not mention this as a possible cause for the rise of aggressive behaviors in the classroom.

The teachers interviewed attributed the escalation of violent behavior at school to an unstable home life. " Teachers say more trauma at home and less support in schools are the most obvious factors.
“When I first started teaching, I’d have maybe one or two students in the classroom with an unstable home life,” said 4th and 5th-grade teacher Cynthia Honma. “Now, I literally might have almost every child in my class.

There's a lot of "Oregon" going on in every school and in every state.

And despite the stories I've been following for the last several years on the decline of education around the world, there is absolute no recognition that this is happening by the national press in America.

Stories get local coverage, and reporters just move on to a new topic. THIS SHOULD BE A MAJOR DISCUSSION ISSUE FOR THE 2020 ELECTION!

The poor kids remind me of the tragic cats from Minamata bay.Below not a film of the "dancing cats" but of mercury in Minamata.Great how the presenter doesn't mention vaccines, along with old thermometers, and old batteries as places that mercury can be found,of course not nothing to do with mercury in vaccines and heavy metals.

The problem of schools dealing with disruptive behaviors of students is as much a problem of the SCHOOLS as well a problem for PUBLIC HEALTH AUTHORITIES.

CONSIDER … WHAT COULD POSSIBLY BE CAUSING 54% OF THIS GENERATION OF CHILDREN TO SUFFER NEUROLOGICAL/BIOLOGICAL/PHYSICAL DEVELOPMENT PROBLEMS … UP FROM 12% IN 2002?

That question must be answered by PUBLIC HEALTH AUTHORITIES .. not the EDUCATION AUTHORITIES WHO MUST DEAL WITH THE 54% HAVING DEVELOPMENT PROBLEMS.

I any event .. I found it odd the discussion of instituting "calming rooms" so that disruptive children can learn to "self-regulate" their behaviors .. did not mention any prescribed DRUGS for children diagnosed with various behavioral problems .. such as .. ADD, ADHD, CDD ..? How many disruptive students have been prescribed Ritalin or Adderall .. to name just two of many others lesser known? What is the position of Oregon teachers regarding these prescribed "calming behavioral drugs" for students? Are they "good" or "bad"? Just curious.