Home Donate Contact Us Special Reports Science Subscribe by Email Subscribe to RSS Our Mission
U.S. Rep. Adam Schiff on the dangers of “vaccine hesitancy” and what to do about it.
Argument, Attack or Antecedent: Shooting of Intellectually Disabled Man and his Parents in Costco 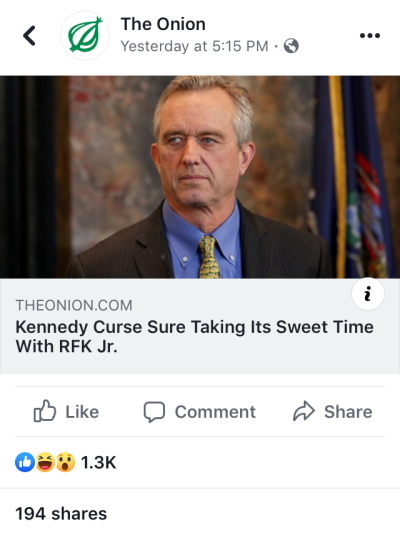 Look at this disgusting screen shot from Facebook. The Onion is a satire site, usually funny and silly.  There is nothing funny about this dig at Robert Kennedy because of his social justice work surrounding vaccinations. It's the bottom of the barrel. Cruel in the extreme. A thinly veiled invitation to violence. For Merck to sell MMR shots?  To poke the eye of a man whose father was assassinated? Whose Uncle was President and assassinated? Appalling.

Those of us who promote vaccination choice and change are the only target in America without any protection. None. Nada. Zero. Zip. It's open season on us. On our rights. On our kids' right to an education. Social Media, mainstream media, the United States Government, State governments all encourage, no, DEMAND, that we are systematically destroyed. Get scared. Get angry.

To Robert Kennedy, we are so sorry to see this happen to you. We thought that maybe, with your American pedigree, just maybe you would spared this treatment and the tide would have already have changed. But the tide will still change. And we thank you from the bottom of our hearts for NOT giving up the fight to protect children.

You do understand that what you just said is contradictory? The far left democratic party has changed their name from socialists to social justice warriors.

To Will: An article defending a Democrat isn’t the best choice to support your assertion that Age of Autism is “right wing.”

As for being social justice warriors, when did that phrase become a pejorative? Consider the alternative.

"If you want to know when the forces of evil began the revolution to take over this country one needs only look at 11-22-63. The revolution was won in 1974."

"Since then we have been run by a luciferian cult."

That is a chaotic idea, fit for a King. Albeit a killed one.

Annie, Greyone, I can't imagine that RFK could ever be talked into running for President. But there's always a chance that he could be talked into taking the job of Secretary of HHS. There he could take serious direct action to clean up both the FDA and CDC, and hopefully (1) educate the American people about how they have been deliberately deceived for decades by corruption in both the government and the medical-industrial establishment, and the price we have been paying for that deception with our health, and (2) spearhead a drive to get direct-to-consumer advertisement of all Big Pharma products banned in America as it is in almost all the rest of the world. So for sure, I don't care what political party they identified with, I would vote for any candidate for President who pledged to appoint RFK to that position and talked him into publicly pledging to take the job if asked to serve.

Oh yuk ,if vile bile like that, is getting chucked around ,that, in itself, most certainly indicates , that
The Children's Health Defense, is having a seriously positive impact!
Any Onion, with an acute presentation of verbal continence issues, problems or difficulties,. should consider the need to get itself to the nearest hospital canteen for an emergency prescription of cornflower and tap water syrup. However, even this, proven safe and effective intervention, is not a guaranteed cure of relief to stop that specific type of verbal skitters from these type of overly burdensom smelly public nuisance ! but it might thicken it up a bit for them? Or else Second treatment option
see book Healing Threads Traditional Medicines of The Highlands and Islands By Mary Beith
ISBN no 978 1 84158 2771
Chapter [1] Origins
The World is devided
There are two destinies
a destiny for happinies
and the Devils destiny !
Chapter [2] Magical Water and Smelly Onions!
Or else Third treatment option ?
A sharp, gentle, skelp, round the back-side of their own dear shifty perceptions with a copy of
The Stornoway Black Pudding Bible . Recipies by Seumas MacInnes
ISBN NO 978 1 84158 908 4
Recipe no [1] American sloppy joes with black pudding
Once the turnips have had a" Good Scoff" of Awa'an'bile yer heid!
"They can sit back and watch with mother"
Skinny Ma Linky Longlegs, Matt McGinn, Youtube

If you want to know when the forces of evil began the revolution to take over this country one needs only look at 11-22-63. The revolution was won in 1974.

Since then we have been run by a luciferian cult. The first action taken was Kissingers National security memo in 1974 deeming global population control a national priority. Since then fertility rates have plummeted to below replacement level in most of the northern hemisphere aside from Islamic countries. Hence the war on Islam

Africa was subdued with disease , civil wars and poverty. Their shorter life expectancies and poverty served to reduce resource consumption as well if not better than reduced population

In Latin America, vaccines were found that produced antibodies against hCG rendering women infertile since the churches stance on contraceptives proved an obstacle to population control

Excess population growth from Islamic and Latin American countries were absorbed by developed nations with immigration to prevent declining population due to fertility decline in native populations, as well as promote cultural divisions as part of a divide and rule strategy

9-11 ended what was left of Democracy. Not that there was much left except in name and lip service

So today 18-35 year olds have a net worth 35% less than in 1996. Many are left with chronic illness and neurological/cognitive issues due to the increased vaccinations that took place thanks to elimination of vaccine liability by Reagan/Bush in the 80’s (also increased RF EMF radiation as a cofactor) . But it wasn't just vaccines, Clinton opened the flood gates for companies to relocate good paying jobs to China, easy credit under Bush Jr/Obama/Trump exploded housing prices and tuitions requiring the young to take on a mountain of debt to graduate from college and own a home.

"AofA is becoming a right wing social justice warrior website. This is not a hate crime but is a little stupid. being pro vaccine or anti vaccine is not an ethnicity or religion."

What do you mean?

Who is taking the onion seriously? I stopped following them like 5 years back when they published that imbecilic cartoon about anti-vaxx mothers bringing contagious diseases back. They are a bunch of pathetic and irrelevant idiots who could not positively contribute to society even if they wanted to. Too much credit by even paying attention to that crap.

Annie,
I love your ballot idea.

Here are points we need to address:
1) WE care about disease too. . That is why we vaccinated .
2) The vaccine caused harm
3) We found plenty of evidence that CDC knows a percentage cannot tolerate vaccines but fears return of disease if people found out vax dangerous
4) this is why they set up vax court, secret settlements, etc
5) we have been begging that they come up with new (nonvax) techniques and use individualized medicine to identidy and help vaccine vulnerable kids—this would increase compliance.
6) we also demand the right to bodily integrity because it is a human right
7) Instead of addressing the vaccine injured they have chosen a cheaper route—to deny us a voice, to continually harm our children
8) If this is really about disease prevention their strategy has failed so badly they need coercion to make it work. This is unnecessary. It is cruel. It is money and pride motivated. And it hasn't worked. The CDC can do better. The AMA can do better. The FDA can do better. They are acting like Linda Farstein refusing to accept evidence as clear as day, sending more and more children to a prison of bad health because they have a theory and just dont want to hear our truth.

This is terrible and cruel

But moreover it is stupid. A nation of lemmings following Big Pharma off a cliff.

Taking Pharma PR’a lead in attacking everyone trying to wake them up. Like my personal hero RFK Jr.

This is not about health. If it were,
we would apply individualized medicine to disease prevention such as measles. This is about using fear tactics to incite people to hate us as threats to their health when in fact we are threats to Pharma’s profits.

RFK JR is getting attacked by people who believe he is right on climate, environment, on and on. But instead of a light bulb going off and making them read his books, they blame the Messiah taking truth to power, for the crimes of the people making money by polluting the temple of our bodies. These people would have crucified Jesus if he affected their pharma stock, and are so stupid that they would get on a 737max if FAA and Boeing told them it was ok and media ridiculed them for watching the coverage of the cra:sh. OH- Adam Schiff would censor covering the crash, to save the air industry. No point trying to fox the airplane if we can censor the news and attack the truth tellers. Cheaper to let a bunch die. Cuz we can cover that up. Sorry a rant

I have never had the desire or felt the need to own a weapon. I guess I have been lucky or fortunate to feel secure in my community, in my country. I no longer have that sense of security. I imagine the Jews who were herded into the Warsaw ghetto might have felt the same until fascism.

I believe that millions of people the world over rising up against vaccine violence would love to see RFK Jr. be the next American President. Forget the Democrats, forget the Republicans! My ballot will read Robert F Kennedy Jr.

In the words of Colton Berrett “the Doctors can no longer be trusted”.

AofA is becoming a right wing social justice warrior website. This is not a hate crime but is a little stupid. being pro vaccine or anti vaccine is not an ethnicity or religion.

I thought hate crime is defined by causing someone harm whether that be harming feelings or whatever other form.Obviously the double standard law clause kicking in again, bunch of cowards.

The Onion's not so humorous attempt to "demonize" RFK by spewing the purely "hateful" suggestion he has evaded the so-called "Kennedy Curse" … therefore he should DIE .. is DESPICABLE .. even for those WHO HATE ANYONE .. WHOSE ONLY CRIME IS TO BE GUILTY OF DEMANDING VACCINE SAFETY.

It should surprise no one the PRO VACCINE ZEALOTS would be willing to employ whatever means necessary to protect their LUCRATIVE GOLDEN GOOSE.

Have sent them an appropriate email.

"The Onion might go bankrupt because they can't compete against the reality now!" So very true!