Home Donate Contact Us Special Reports Science Subscribe by Email Subscribe to RSS Our Mission
AUTISM BITES! Ask This Beautiful 10 Year Old Girl Who Was Ravaged On The Bus
Connecticut Looks to Remove Religious Right to Vaccine Exemption in "Emergency" Bill on May 13

A couple of years ago when we discovered that Ronan was getting better at typing, I asked him to fill in a few short sentences.  When he was finished, I couldn’t wait to show the rest of the family.  We were all so excited to see his responses!

For years, Ronan would only tell us what he wanted.  I got used to his one-word requests, either by sign or his typing attempts, but craved to know more.  Getting Ronan to the next level, like knowing what he was feeling, would take some time.  It’s neat to see that he can do more than just make his wants known like this one from 2011:

I love that Ronan has learned that his ability to communicate is important.  One word at a time, he has been able to tell us not just his wants, but also his needs.  When it’s too cold in the room, he types cold and asks for assistance to put on a jacket.  When he’s upset with someone or something, he will now quickly type “feel sad” or “feel angry”.  With prompting, I’ve been able to help him type full sentences.  Since much of his communication still includes requests, I ask him to be polite in making them – address his helper and add please or thank you. 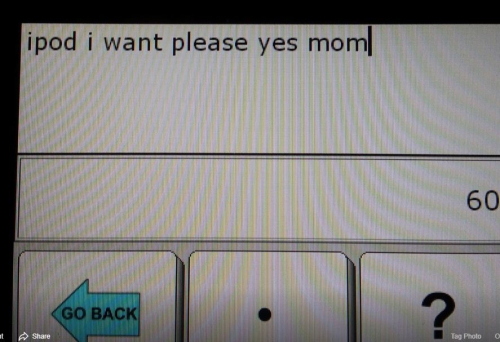 Non-verbal autism severely limits Ronan.  Patience, determination, and his brave attempts at trying to talk while he’s typing continue to keep me hopeful though.  His latest vocal outputs and his growing receptive language skills are encouraging to hear and see.  Since he can comprehend much of what is going on around him, I try to find new opportunities for Ronan to join our activities and to find out more about what he’s thinking about.  While we’ll always hope and pray for verbal speech, lately, we maintain the focus on writing and typing with Ronan.  I’m glad we are.

Ronan does more typing than handwriting.  It’s been that way for years because typing is just loads easier for him.  Sometimes, Ronan doesn’t want to type.  Sometimes, his device needs to be charged.  So, we go back to pen and paper.  One day awhile ago, when Ronan was very engaged with some writing I was doing, I quickly jotted down something for him to read and answer.  I’d never thought to ask him before, but with how engaged he was, it was the perfect time to ask. 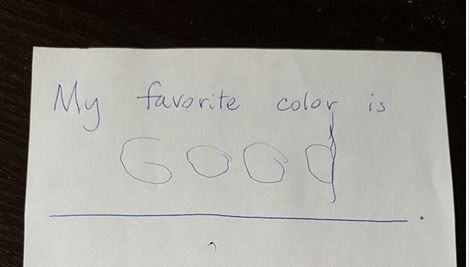 I came across that photo not too long ago while looking at an old file on the computer and wanted to see if Ronan’s favorite color was still Good.  He was more specific this time.  I typed the prompt, and he shared his reply. 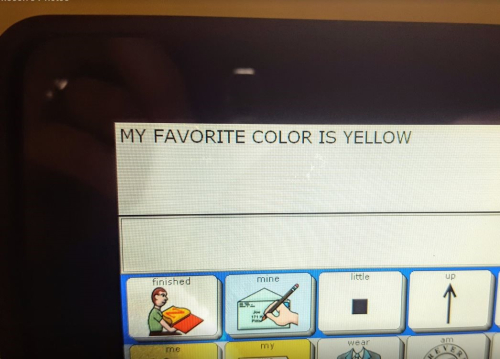 According to Ronan, my favorite color is red.  And it’s so funny that he knew that.  A month ago, the kids asked me what my favorite color was.  I told them that it’s usually blue, but not during the month of April.  That day, my favorite color was red.  Ronan was in earshot of that conversation and remembered it!  Last week at therapy while Ronan was worked on some new writing prompts, he used his communication device to type share that bit of knowledge.  He didn’t answer all of the prompts that day, but the ones he did answer made me grin from ear to ear. 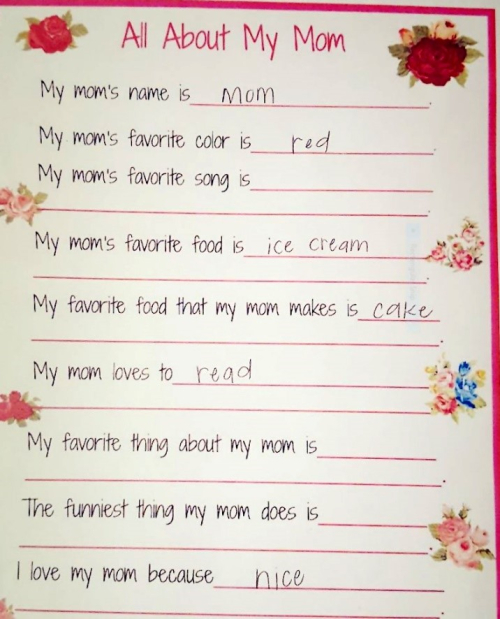 Being a mom can be tough.  It can be hard for mothers of typically developing children.  It can be very hard for moms of special needs children.  That said, I wouldn’t trade the job I have as mom for anything.  I miss teaching and working in the “real world” some days, but I really love being a mom to each of my children.  I’m not always the nice mom like Ronan says that I am.  I dole out chores, I expect them to be done well, and I remind the kids that consequences, both good and bad, exist.  They exist not just for their awesome behavior but, for their misbehavior also.  I include Ronan in those expectations also and will remind him that he, too, could face consequences.  Obviously, he’s not held to the same standards as his siblings are due to his disabilities, but he is showing more understanding of “if this…then that…” If he chooses to be a rotten pickle like his brother or sisters sometimes choose to be, then he will lose a privilege as they sometimes do.  Ronan’s gotten better at understanding that pattern the older he’s gotten.  It hasn’t been very often that he’s purposefully done something he knew he should not have, but on a few occasions, I have had put my foot down with him.

I was M.O.M. tonight--Mean Ol' Mom--when I wouldn't give Ronan him the iPad and the iPod at the same time.  Oh, the crocodile tears!  He was about to get super frustrated with me, so I distracted Ronan and asked him to type to me instead.  I went first and typed, ‘I love you.'  His reply is in the picture and was followed by a "love" sign.

That was a tough day.  It was a very rewarding day, too.  Ronan’s behavior could’ve escalated that day, but he was able to remain calm.  He wrote me, and did it with emotion.  After some redirection, Ronan opted to use one of his devices, not two, and was able to tell me that he loved me.  I have yet to hear the words I love you come out of his mouth, but I’ll take those typed words of his any and every day until he can talk.  He knows I’m his mom and that I’d do anything for him.  I ‘lovie’ him.  I always will.  ♥

Happy Mother's Day Cathy. That is so wonderful that Ronan can type all his needs and thoughts to you so well! He will get better and better at it as he keeps up the good communication. One day he will be able to talk to you and that will be a blessed moment. Thanks for another great article.

So glad to see Ronan typing things out to you. Those sentence prompts are a great idea, I can't wait to borrow it. My son types out words on the iPad when I can't understand what he is saying. His articulation is really poor sometimes, but it makes me so happy to hear him try to communicate. Hope Ronan will soon say "I love you." Happy Mother's Day.

Thank you, Cathy, for your interesting and uplifting article. I am so pleased that Ronan is progressing with his communication.

Wishing a very happy Mothers day to you, and all 'Moms' on this site. (Mothers Day in UK was in March)

This stort about Ronan’s progress made my day!! YAY!

This morning I clicked on CBS because I wanted some tv news and MSNBC had soccer. A guy being interviewed said "MMR." That got my attention. He went on to say that MMR was given around 12 months and children can show signs of autism at 3 months, when the vaccines hadn't even been given, so vaccines can't cause autism.

The "vaccines" hadn't been given. He didn't say "MMR" hadn't been given, which would have been the natural thing to say given the previous sentence. He was trying (clumsily) to mislead the audience, but mothers and fathers know a child has received many a vaccine by 3 months.

I clicked off and didn't hear the rest. Couldn't bear it.

God Bless all the Autism Mother’s out there today & every day. Here is a pretty good clip with RFK Jr.

He covers the entire program, but the last few minutes he talks about the Mothers.