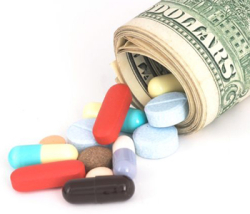 Mental illness, Rx drug treatment and abuse, side effects, black boxes... what is the state of mental health in 2019? Our Anne Dachel's site lossofbraintrust.com has been cataloging the demise of education around the world as children as young as preschool sink into the web of  behaviors, violence and Rx drug prescriptions.  Schools are faltering under the weight of having to teach students who are mentally or as we often call it, neurologically ill.  Toxic insults that affect the brain begin in utero.   This article from NPR's Terry Gross caught my eye.  The topic will only grow more urgent. We had yet another school shooting last week. Another violently angry, maladjusted young male. The shooters used to be disgruntled middle-aged men who lost their jobs. The "good" old days that spawned "going Postal" as a phrase for a meltdown. Today, it's young men. Is Pharma and our willingness to turn over our very brains and immune systems to their pills and needles the root?

Insurance that will cover prescriptions doesn't always cover talk therapy, a chance to work out your problems with expert guidance.  I think of a therapist like a tug boat.  Gentle assistance to move forward to your journey or into a safe harbor. During my divorce, a therapist gave me a sounding board, solid ideas that were mine to pursue or not, and moments of quiet that I needed. A pill that would have tamped down my anxiety over the process would have numbed me perhaps, and just put off the pain. No thanks.

Who is at fault? The doctors who allowed their unions to fall under the spell of pharma money, trips, incentives. Politicians who suck at the teat of pharma donations. And consumers - yes, us too. Consumers, who want a quick fix in place of hard work. Are pills always wrong? No, of course not. Nor are the a pillacea.....

Historian and Harvard professor Anne Harrington believes that pharmaceutical companies have played an oversized role in determining how mental illness is treated in the United States — leading to a rise in the use of antidepressant drugs.

Harrington's new book, Mind Fixers: Psychiatry's Troubled Search for the Biology of Mental Illness, chronicles the history of psycho-pharmaceuticals, such as Prozac and Xanax, which have been used to treat depression and anxiety, as well as lithium, the first drug to treat what is now called bipolar disorder.

Prior to the 1970s, Harrington says, society tended to distinguish between forms of depression that should be treated medically versus depression caused by "bad stuff going on in your life," which was thought to be treated best by talk therapy.

But as pharmaceutical companies began to market antidepressant drugs, the focus of treatment for many people moved away from talk therapy. Harrington says this shift has not always served patients well.

"We don't know enough about the biology of these mental disorders to know whether or not some of the reasons are biological — in the sense that medicine likes to think of these things as diseases — and whether it's just because they're having terrible problems," Harrington says. "I would love to see a larger, more pluralistic set of options."

This just sounds like another book full of hot air. Why don’t we have info on biological causes of mental illness? They are not looking for it. It is hard to find something you spend no effort looking for. Most research is on drugs. Some on psychology or trauma but precious little on nutrition, heavy metal poisoning, thyroid issues and other physical causes of mental illness. With all the money spent in the last 20 years there could have been tremendous progress made, lives and money saved. Instead we are in the same place reading the same hot air with a veneer of profundity.
The choice is not binary: therapy or drugs, on serious mental illness neither usually works in any long term way. You need to solve the issue and yes it is biochemical. Problem is severe incompetence and corruption.

"Study 329 had all the makings of a scandal.

Thousands of North American children and adolescents were seriously harmed by taking SSRIs like Paxil. Many died. Neither doctors nor parents had the information they needed, and the FDA only reluctantly issued the appropriate warnings, as might be expected from a regulator that has 'corporate partnership' in its mandate.

So why aren’t we all scandalized?

The impact of the 2001 study stayed under the radar for many reasons. People trusted the integrity of scientists at major universities. They believed that drug regulators’ top priority was public safety, not really understanding that their mandates were more complex than that. Journalists, doctors, and the public were captured by effective marketing of the drugs....

In the early 2000s, based on Study 329, GlaxoSmithKline (GSK) marketed Paxil (paroxetine) as safe and effective for children and adolescents when company executives were aware that a number of studies (all but Study 329 unpublished) had shown that the drug was no better than placebo and caused thought disturbance and suicidal behavior in some youngsters...."

On the other hand, there is no biological basis to mental illness, which is presumably the message of this book. Thanks for bringing it to our attention. A very important topic for our age.

At the risk of being repetitive I must point out that "mental" and "neurological" are not synonyms as the article seems to imply. The mental or mind function of the brain is only one part of its total, and produces the thought, mood and emotional processes. The rest is not available to our consciousness, and causes all the automatic functions. Any combination of the latter may be effected if there is brain damage. I remember after Professor Stephen Hawking died (of motor neuron disease) a friend of his remarked that in spite of all the tribulation he must have endured for most of his life he never suffered psychological illness. So, it seems that most people don't find it difficult to understand the difference between neurological and psychological illness, and we're doing autistic people a grave dis-service if we confuse the two, since we know that autism is caused by a brain injury.

Thank-you, AoA, for this post which is really nowhere near as "off-topic" as it might seem.
here's a list of books I often recommend, that everybody should at least be familiar with:
1. "The Myth of Mental Illness", by Dr. Thomas Szasz, 1961 (the 2010 edition has an excellent Authors' Preface.)
2."Toxic Psychiatry" by Dr. Peter Breggin, 1991 (ALL of Dr. Breggins books are excellent)
3."Mad in America", and
4."Anatomy of an Epidemic", BOTH by Mr. Robert Whitaker, who also has an excellent website, >madinamerica.com<, where this topic is explored with more TRUTH....
5."Saving Normal", by Dr. Allen Frances, who was the chair of the DSM-IV committee, then rebeled against the excesses of the DSM-5 with this book. The TRUTH is that psychiatry is a pseudoscience, a drug racket, and a means of social control. It's 21st Century Phrenology, with potent neuro-toxins. Psychiatry has done, and continues to do, FAR MORE HARM than good. Most psych patients are grossly over-medicated, and the toxic effects are covered up as yet more so-called "mental illness".
And it should be pointed out that ALL the bogus "diagnoses" in the DSM were INVENTED, and CREATED. NONE of them were discovered. THINK about THAT.... PhRMA is NOT your friend. But who here doesn't already know that?....

I agree that talk therapy can be very helpful for some in resolving psychological difficulties, better than drug therapy. But when it comes to addressing violent crime, I don't believe that either pharmaceuticals or talk therapy will work in many instances. For those who are suffering due to toxicity and/or nutritional problems, they will need help detoxifying and/or resolving their nutritional deficiencies/imbalances.

Xanax; Really needed when a large segment of the population has been given anxiety disorders.

What I know "NOW"
*Prozac acts like a meth drug. Is an upper! Crazy stuff happens when you don't sleep. Oh, and withdrawal
is a bitch!
*Zoloft can put a person to sleep; as sleep till you die, no eating, and barely breathing, or acts as an upper, meth like
drug. Confused yet? Oh, and Withdrawal is a bitch.
*Lithium causes a person to get some kind of tremor that will not go away when a person stops taking it.
*Acquired Mitochondrial muscle disease, from vaccines: neurologists all say is so painful that they will send
their patients to pain clinics.
*Pain Clinics will up and up the dose of opioids, at each visit, with out a care; and are in fact rather eager.
*Drug stores really charge pretty high prices for "Higher doses" of opioids; compared to the really
lower doses of opioids. Kind of like enticement before the lower the boom on ya.

Seizure medicine Phenobarbital for a baby with seizures lowers it's IQ. The medicine not that seizures won't too.

Dilantin for epilepsy will sap the body of calcium. In doing so it makes white spots on the teeth, thin the bones,
coarsen the facial features, and will eventually - always will cause an hunched back.

I have never had to deal with the diabetes side of vaccine injuries, By the grace of God it never came my way, yet!
Not true for my nephews and grand nephews.

"The topic will only grow more urgent. We had yet another school shooting last week. Another violently angry, maladjusted young male"

(With apology for re-submitting this prior response to AoA contributor Shelly Tzofas .. I think it applicable to this column as well .. worth reading for those who missed earlier posting)

I greatly appreciated the article you recommended listing SSRI drugs connected to mass shootings in this country over decades … positively frightening these drugs continue to be prescribed to people with mental health problems. FDA says the risk of violent results from taking these medications is as "rare as 1 in 1,000" but there are literally MILLIONS of people prescribed these drugs. 1 in 1,000 of MILLIONS seems like a HIGH RISK to general population. Everyone should read Shelly's article: