May the Fourth Be With You Senator Richard Pan 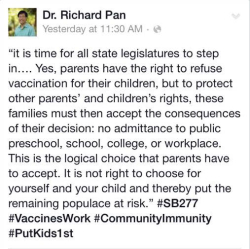 Senator Richard Pan of California is the face of vaccine oppression. He is a pediatrician turned politician whose autistic-like focus is the removal of vaccination choice, regardless of the health status of the patient or the medical choice we used to believe we had as Americans.  Joshua Coleman is the father of a boy who was severely injured by vaccination. He has taken it upon himself to hold Senator Pan if not accountable, as least cognizant at some level, of the very real consequences of forced vaccination. You can see much more of Josh's work at his Y0ouTube channel here.

Our Anne Dachel interviewed Joshua in 2016. Here is a quote from him:

Joshua and his son Otto

Here is part of what Joshua had to say about the reality of vaccine injury and what doctors and legislators are willing to close their eyes to.

"We asked why this had happened, and the doctor said it was most likely a reaction to either a vaccination or an airborne virus, the latter being rejected since he'd had no signs of illness.  The doctor then slammed the door shut on further discussion of how our healthy son went from walking to being paralyzed.  There was no investigation to specifically determine what had caused our child to go from walking and running into a wheelchair for the rest of his life.  At a later date, we took our son to Johns Hopkins for further testing.  There, doctors investigated every possible reason why our son might have become paralyzed from Transverse Myelitis, every possible reason except for vaccines.  This made no sense then, and it makes no sense now, as every doctor that Otto saw at four different hospitals mentioned that the vaccines he received in close proximity to his paralysis were the most likely culprit."

Check out this video Joshua made from the May 4th March for Science in Sacramento, California where Josh donned a Star Wars costume. Senator Pan used the opportunity in a wry fashion, Tweeting: “Even anti-vaxxers w/ the Dark Side need #CommunityImmunity to keep their family safe from #measles &amp; other VPDs. #VaccinesWork #IVax2Protect #FakeMEsHurtKids #SB276 #MarchForScience #MayTheFourthBeWithYou @SacScienceMarch @VaccinateCal”

And The Vax Wars continue. 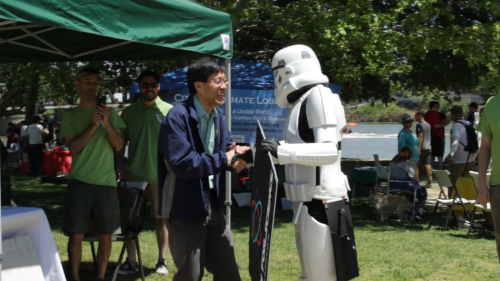 Am wondering if there are any lawyers out there who would know the answer to this; manufacturers of vaccines are exempt from liability, but can doctors, senator Pan,, or board decision making members be sued in a civil or other suit for medical malpractice if their decision to force vaccination results in death or injury to a child whose medical rights they have chosen to take away?

Thanks Hans for posting the link on Texas Rep. Stickland taking on Hotez....EXCELLENT!!!

The clueless in Ca. need to read the comment section.

Germany is discussing allowing the rich to pay a tax to skip vaccinations it seems.
Italy & Australia already have the policy in place.

DO NOT WATCH THIS VIDEO
AND DO NOT SHARE IT WIDELY

The vaccine program is to climate change what rearranging the deck chairs was to the Titanic. Shame on you Pan, you despicable coward.

Great work Josh!
Does Dr. Pan still have a medical practice of some kind ?
Or is this his year round job ?

How long did he have a practice when he had one ?

There seems to be a concerted effort by many in government to make the people compliant, stupid, fat and sick much of the time. We are the least healthy industrialized country on earth and among the least fit. More than half of our young people cannot qualify for military service. Periodically administered international tests of academic competence suggest the rest of the world is getting smarter faster while most of our schools seem to be running in place. If today’s bloated vaccine schedule was effective, how come our children are the least healthy of any generation since World War II.

I develop these points in the following article and suggest that too many of our federal agencies are captives of the very industries they are supposed to regulate - specifically, the medical, chemical, pharmaceutical, agribusiness/food, telecommunications and environmental protection industries. Our declining health in the face of escalating healthcare costs suggests that our national security and solvency requires reversal of several harmful governmentally-imposed healthcare policies and serious lifestyle changes among most of us to get healthier. The article lacks corroborating footnotes but provides suggested articles at the end.
https://www.linkedin.com/pulse/what-we-must-do-get-healthier-reduce-healthcare-costs-barry-stern

Maybe its time to start calling for a Nuremberg 2 . Like Pan said there should be consequences for decisions . Especially decisions to inject children with toxic materials that have not adequately been tested under the guise of protecting them from benign diseases or diseases they are unlikely to be exposed to as children. Those who help cover up these crimes should be sanctioned as well.

Frankly, its more than the right to choose for your child. What of the children of the misinformed parents? Not to mention that after the children they will be coming after adults

God bless you, Laura.
I feel the same way-Nazi Germany.

Pan is Jabba(many of them) in the Hut...cringe worthy a 10 for sure!

Well done Josh, thumbs up from the UK..

Josh got his picture taken with Pan before the speech with the sign that said "March for Science" and then ----- states what the science said. Josh, I love ya Man!

No high fives from the women in red after that lame speech... that is CLASSIC !! Sorry Senator Pan, they know about your pharma racket.

Pan is too cowardly to have a public conversation with the multitude of scientists with the same (if not better) credentials as he regarding this issue, and yet he is getting away with denying education and services to disabled children....written. into. law!

When the policies you are about to implement will result in harming disabled children, you really need to check yourself!

Wow.... I feel like we are back in Nazi, Germany times. Pan is definitely a new age Hitler. If he has his way, he would go door to door and vaccinate every living person at gun point. I'm moving out of this God forsaken state asap

Speaking of pro-science, here is a well-researched article that details the conscientious rejection of vaccines throughout their history:

What a disgrace, that Senator Richard Pan... he stutters and stammers as he struggles to deliver the Pharma talking points that even he doesn’t believe in. Poor guy, he could have much more easily stayed on the path as a “doctor”, a pediatrician who vaccinates defenseless babies.. it’s easy, and you don’t even have to talk to parents about known risks or file VAERS reports .. after all, who on earth is going to hold you accountable? Just plug in procedure codes and get paid!!
Anyways... this what is now a LIBRARY of excellent Josh Coleman productions will enlighten future generations about the stupidity and greed of today’s politicians, because these videos will be ubiquitous in documentaries about vaccine corruption and how the bad guys were ultimately defeated.

From Pan's statement pictured above:'

"Yes, parents have the right to refuse vaccination for their children, but to protect other parents and children's rights, these parents must then accept the consequences of their decision; no admittance to public pre-school, school, college or workplace. This is the logical choice that parents have to accept. It is not right to choose for yourself and your child and thereby put the remaining populace at risk".

This is classic language straight from George Orwell's "Animal Farm" .. where "all pigs are equal, but, some pigs are more equal than others".

Pan would have us believe all "parents have the right to refuse vaccination" but those parents that do choose not to vaccinate must be punished for exercising their right to choose .. making all those parents that DO VACCINATE THEIR CHILD MORE EQUAL THAN OTHERS.