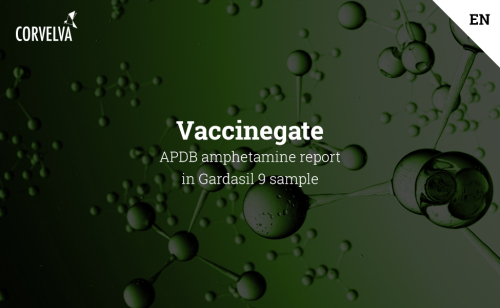 From Corvelva, in Italy. Please note, this is a translation from the Italian.

In analyzing the Gardasil 9 papillomavirus vaccine, from a metagenomic and chemical point of view, we found many non-conformities that, to our opinion, they should require the authorities to re-analyze at least the lots analyzed by us, the immediate withdrawal if our data are confirmed and a wider re-evaluation of the analysis to be performed on all the vaccines on the market.

From what we could see the problems were, under the metagenomic profile, the presence of adventitious genetic material presents such as bacteria, human and mouse DNA, adventitious viruses like phages and retroviruses and yeasts.
What most impressed us was the presence of L1 fragments of the genome of papillomavirus. These fragments should not be present in the vaccine because the papillomavirus is carcinogenic and their presence together with the aluminum adjuvant is believed to be the cause of some of the serious adverse reactions in the injured.

The same chemical analysis, even if shocking due to the number of potential non-residual contaminants found, had left a huge question mark. The analysis with the technology used in the laboratories we identified, gave us 338 signals of which only 22% are known. What has seemed to many unbelievable, that is the list of the probably identified compounds, in reality, to us, it created enormous interest the remaining 78% not known.

A study of this unknown 78% started a further study and, after repeated analysis carried out in two different laboratories and with two different instruments, we can now tell you that a signal we found, compared to three databases consulted, leads us to determine that in some lots of Gardasil 9, especially in lot R009338, there is a contamination corresponding to an amazing drug called APDB.  Read more here.

I see two reports of serious side effects in vaers associated with the Gardasil 9 lot number mentioned in the article. Both made it into vaers even though they were administered on foreign soil. I think we can assume that there are many more adverse events that haven't been reported to vaers.

If vaccines are contaminant-laden (and it seems that many are if anyone bothers to check), wouldn't this pierce the manufacturer's immunity?

Yes, Hans. It is. Presumably that is why all the Powers that Be are fighting so hard to keep the lid on it.

This quite frankly is the crime of ALL centuries isn't it ?

Legislators in Minnesota have introduced four separate resolutions aimed at restoring the provisions once contained in the National Childhood Vaccine Injury Act (NCVIA) that recognized the constitutional right of Americans injured or killed by vaccines to pursue rightful justice against vaccine manufacturers in a court of law.

HF 2862, HF 2825, SF 2781, and SF 2831 all take aim at the Supreme Court ruling that was made in the case of Bruesewitz v. Wyeth, which “immunized” Big Vaccine against liability for adverse effects caused by its vaccines.

“In 1986, there were seven vaccines that were routinely administered to American children. Yet, there were so many catastrophic injuries caused by this schedule that some of the vaccine manufacturers threatened to stop producing them, due to the large damage awards that they were ordered to pay when people were injured,” stated Representative Jeremy Munson, a Republican from Crystal Lake, Minnesota, and the man leading the charge to make vaccine corporations liable again, during a recent press conference.

The HPV has proven to be a huge "marketing success" with many studies showing all indications the "benefits of HPV do not outweigh the risks". Here is a paragraph from Dr Neil Z Miller's book "Miller's Review of Critical Vaccine Studies" on the HPV vaccine:

"The evidence in this chapter shows that clinical trials and marketing tactics by the HPV vaccine manufacturer may not be reliable. The HPV vaccine has been linked to serious adverse events, including autoimmune disorders, multiple sclerosis, amyothrophic lateral sclerosis, Guillain-Barr syndrome, paralysis, convulsions, chronic fatigue syndrome, anaphylaxis, pulmonary emoblisms and death. Malfunctions of the autonomic nervous system, cognitive dysfunctions, gait disturbances, menstrual problems and ovarian failure have all been reported following HPV vaccination as well"

Consider this ongoing "marketing scheme" in NY State legislature awaiting a vote on a pending bill that would allow 9-10 year old GIRLS AND BOYS receive HPV without parents consent or even knowledge.

This is absolute madness leaving parents without any legal response should their precious child be seriously injured by this well-know DANGEROUS VACCINE.

But New Yorkers need not worry .. our state legislature is working hard to remove the religious exemption to vaccines because too many parents haven't vaccinated their child for MEASLES.

We are living in a world gone completely mad.

This has got to be so embarrassing for the Vaccino-Criminals. APDB
Corvelva and Italy are looking like the most important PEOPLE in bringing down this crime.
Are you reading this JB Handley ? With your China idea ?

What the hell is wrong with this world - It should not be this hard to wake and shake people up.

100s protesting in Maine is ridiculously small for the greatest crime in all history.
Maine RIP
California RIP
May they all rest in peace.