"Thousands May Have Gotten Non-Hodgkins Lymphoma From Monsanto Round Up" 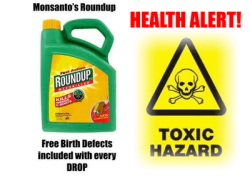 Just look at this headline from a FB post yesterday! "Thousands May Have Gotten Non-Hodgkins Lymphoma From Monsanto Round Up"

LIARS!!! LIARS!!!! OVER-EDUCATED WHITE WOMEN IN FANCYPANTS WHO SHOP AT FANCYPLANTS! Desperate to blame someone and disparaging the MIRACLE of Round Up!!! Theses people are anti-pesticide and a threat to the entire plant AND animal Kingdoms, Phylum, Class, Order, Family, Genus and SPECIES!!!!! (Tongue meet cheek.)

A number of studies have found evidence linking the weed killer’s main ingredient, glyphosate, to serious side effects and certain types of cancer, including non-Hodgkin's Lymphoma.

The World Health Organization’s International Agency for Research on Cancer (IARC) recently found that glyphosate in Roundup is likely a cancer-causing agent. The IARC report linked the side effects of Roundup® to an increased risk of non-Hodgkins lymphoma (NHL).

Scientific studies have shown a causal association between Monsanto Roundup® weed killer and an increased risk of certain forms of cancer.

An advert for ambulance chasing lawyers.