Add Intercessors for America to the New York Jewish communities and the expanding list of religious groups standing up on vaccine issues.

Intercessors for America is a group founded in 1973 to pray.  About everything.  They started with the Vietnam War, Watergate, and Roe v. Wade, and they are still going.

Earlier this year IFA learned that some vaccines contain the remains of aborted fetal cell lines, and their leadership, who have been earnestly praying for the lives of unborn children for since before most of us were one, found out that they had been participating in the very practice that they had been entreating God to end.

One of their staff remarked to the vaccine injury mother who had brought her the information that she didn't understand how she could not know that she was participating in a practice that she had been fighting against for decades, and that a pall had fallen over their office as they tried to process the harsh reality they were confronting.

IFA has processed and responded to the conviction that their consciences pressed upon them in one of the best examples of humility and repentance that I have seen.  They have not become lost in "Greater Good" excuses rooted in hypocrisy that we see happen so often.  They have stayed true to their core beliefs and are telling the greater church and pro-life community about the ugly truth, issuing multiple calls for prayer and action on vaccine choice rights. 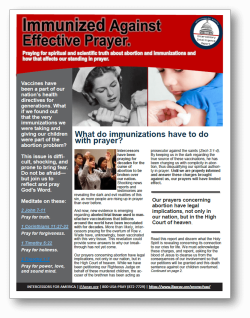 They started by issuing a report on the matter which included introductory discussions of the WI-38 and MRC-5 cell lines and how it relates to prayer and members of the Christian church.  And they do not mince words.

They then sounded the alarm about the March 5th Senate Hearings and noted that 13 of the Senators on the Committee that attacked our rights are proponents of the Born Alive Act, and must be informed of the conflict.  They even reported on the treatment of our families:

*** IFA Just received this from those at the hearing: “They are refusing to let any family that does not want to vaccinate to come into the hearing. They are sitting in the hallway. Please help pray for peace for our families. We are so hurt and our children are so sick…and I know God is moving in this but it breaks my heart into a million pieces.” ***

IFA put out a prayer request surrounding the Rochester ruling that initially disallowed children to return to school on March 16th.

And this week they issued another prayer to call in action surrounding the attacks on religious freedom in vaccination in Brooklyn, Colorado and Maine. They even reference Plotkin's videotaped testimony admitting to facilitating multiple abortions for just one of his research papers.

If you pray, please visit IFA, thank them for their service on this issue, and pray with them.  If you don't, visit IFA anyway, and thank them for being a voice for our rights.

Vaccines are a fraud, and money maker for big pharma,
Here’s how this con job goes and although it repeats itself under different names, year after year (Corona, HIV, AIDS, SARS, Ebola, Zika, Mad cow etc etc) most of the uninformed public react as programmed, simply because fear is PROVEN to trigger a narrowing of the mind, a lowering of IQ, a stimulation of the child ego (that looks for an adult to save it) and a reflexive obedience toward perceived authority.
The con job goes like this.
Step 1) poison the population purposely to create disease that does not and would never occur naturally
Step 2) parlay the purposely created disease as being caused by something invisible, outside the realm of control or knowledge of the average person
Step 3) create a toxic vaccine or medication that was always intended to further poison the population into an early grave
Step 4) parlay the vaccine or medication poisoning as PROOF the disease, which never existed, is much worse than anticipated
Step 5) increase the initial poisoning, which is marketed as a fake disease, and also increase the vaccine and medication poisoning, to start piling the bodies into the stratosphere
Step 6) repeat as many times as possible upon an uninformed population because killing a population this way (the art of having people line up to kill themselves with poison……known as a “soft kill” method) is the only legal way to make sure such eugenic operations can be executed on mass and in plain sight.

I don't see how sending out prayer requests can be considered "standing up for vaccine issues." Let's not lump IFA in with the New York Jewish communities until they do something a little more meaningful - like file a lawsuit.

Thank you for the links. I read the first sentence of White's book and was stunned. Hope to get through the rest this week. Scary how history repeats itself.

@pogo thanks for the original references, fascinating!

wow Pogo,
I had no idea there was an attempted syphilis vaccine back then. yikes!

POGO, thank you for those references. I have only just started reading the second one and am amazed at the similarities (exact sameness as you say) of the past and present. I was shocked by the roles of Wilberforce and Shaftsbury. Plenty of reading for me to go on with! Thanks again.

Thanks, Ginger. I'm not religious, but am as horrified as everyone should be at the trampling of the rights of those who are, of the very first right delineated in the Bill of Rights. Medical fascism is sweeping the world. They won't succeed. Humans can only be pushed so far, at which point, they rebel.

Whenever you broach this subject with most anti-abortion people you should *always* complement it by saying that congenital defect rates have not fallen since the rubella (MMR) vaccine.

https://jamanetwork.com/journals/jama/fullarticle/181499 - doctors don't blame rubella (CRS) of course but congenital defects are as common as ever.

That way, their standard rationalization of "greater good" is a non-starter.

may God trouble the waters

The Story Of A Great Delusion by William White 1885

Have often heard this book referred to but never read it until now. It is a very long read and keeps raising my blood pressure by several millimetres of mercury each time I delve into it, so ‘am wishing I hadn’t started.

What is so remarkable, is that the machinations of forced vaccination in 19th Century Britain are not just similar but exactly the same. One would image that Governments would be wiser today. Evidently, this is a naïve delusion in itself.

Found a free downloadable version which you can email to any friends who still believe that mandatory vaccination alone drove smallpox out of 19th Century Europe. The incidence was already on the decline before vaccination was commenced. It also spread smallpox, syphilis, et cetera. It was killing more people than the disease it was trying to prevent. The excuses were the same – so were the denials.

For anyone who likes this old stuff, there is this review as well, much shorter to read and no less true: Vaccination by Act of Parliament 1889 . Anon.

Post script: Socrates was sentenced to drink Hemlock for "corrupting the youth". Meaning: He taught his young students to question authority. Today, would he be executed by a perfectly safe injection? Just asking.