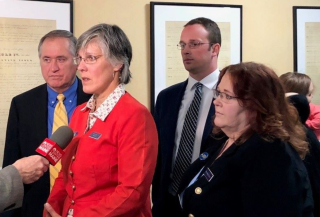 Yesterday, Maine's LD 798 to implement mandatory vaccination for Maine daycare, preschool, school children (public and private, IEP and 504 kids), college students, and health care workers has passed out of committee with a 8 - 5 split decision OUGHT TO PASS. Vote was on party lines, democrats recognizing that the bill violated minority and religious rights, but that it should be done for "The Greater Good."

The bill has been amended to push back implementation to September of 2021 and to allow for an unrestricted medical exemptions.  LD 798 will go to the Maine House.

The Republicans on the Education Committee issued statements following the hearing:

“This bill targets a minority who represent 5% of our student population for the purpose of segregating and marginalizing a small group of our children using coercive measures and threatens to force them to comply or be expelled. There are more prudent measures we could implement to achieve the accurate data to make the most informed decision.” - Rep. Heidi Sampson (R-Alfred)

LD #798 will affect workforce development and adult learners, whether they have been immunized or not, because they will need to locate their records instead taking a philosophical exemption. This can be frustrating for someone who decided to go back to school after many years. The cost to University of Maine system, the Maine Community College system and our private higher education institutions has not been quantified.” - Rep. Shelley Rudnicki (R-Fairfield)

“There are serious constitutional concerns in regards to LD 798. It demarcates and segregates a new minority in Maine. Poor families, who have no choice but to comply, will have to override their bodily autonomy and receive an invasive procedure against their consent. This is egregious legislation that flies in the face of liberty.” – Rep. Justin Fecteau (R-Augusta)

“We are not anti-vaccination, we are just looking for a little common sense before we violate the civil rights of Maine families without complete information or some assurance that this will result in improved public health. - Rep. Gary Drinkwater (R-Milford)

All Committee Republicans today opposed the mandatory immunization bill (LD 798), because it overrides parental consent, violates body autonomy and targets a minority of children and parents seeking to opt out of vaccinations on philosophical and religious grounds.

School districts could lose up to $75 million if several thousand children lose their religious and medical exemptions and are prevented from attending school. All Committee Democrats voted for the bill, despite the lack of a demonstrated need for the bill, a lack of consistent data for a science-based decision and over the objections of thousands of Maine parents who contacted them."

I will be offering full coverage on the events in Maine soon.

thank you, rep Justin Fecteau and the other committee members.
Requiring anyone to take a medical intervention that requires you to give up constitutional rights to due process for fatal or debilitating results, as per the Breusewitz v Wyeth decision related to product defect is a most serious violation of United States principles.

Thank you Gary Drinkwater and the rest of the Common Sense Legislators who voted AGAINST this Corrupt and Deadly Legislation favoring the Corrupt & Deadly Big Pharma that continuously injects US with their Deadly Chemicals that make big $$$$$$$$$$$$$$$$$$$$$$$$$$$$ for BIG PHARMA. If you want the TRUTH about vaccines & Big Pharma look up Robert F Kennedy Jr. and Del Bigtree and get educated !

Same as here in Oregon where they talk of protecting the mythical unicorn children no one can find that "can't be vaccinated and must be protected" while we are screaming, "It is us, you are failing to recognize the very ones you want to protect are the same ones you are rolling under the bus." But they have their marching orders and it seems nothing will deter them. Our children have been bought and paid for by big pharma.

So insulting... if this thing becomes law you damn well know they'll be circling back to remove the medical exemption.. it's happening in California right now, where they're attempting to strip the medical exemption from doctors/families and place it into the hands of the STATE

Keep fighting, do not give up. No compromise. There is NO PROTECTION in the medical exemption alone.

"Big money--corporate, foundations and federal--has commandeered the media, public health and legislatures. And they will continue to run these scams unless voters of both parties wise up and stop them."

Better known as THE SWAMP

This is a repeat of what has happened here in Oregon. I have tried to find the "model legislation" to send to the USA Today investigation of corporate interests not just buying our legislators but writing the actual bill. It is too much of a coincidence that some 30 states have suddenly decided forced vaccination is worth stepping on our rights as citizens and parents, and on the patient-doctor relationship of trust and consent.

I encourage those in Maine to use followthemoney.org to see the discrepancy in votes between those who received pharma and pac money and those who didn't.

Big money--corporate, foundations and federal--has commandeered the media, public health and legislatures. And they will continue to run these scams unless voters of both parties wise up and stop them.

"Vote was on party lines, democrats recognizing that the bill violated minority and religious rights, but that it should be done for "The Greater Good."

I think it admirable the Democrats at the very least "recognized the bill violated minority and religious rights" .. but .. I wish they had identified exactly "who" .. or .. "what" .. qualifies as the "greater good"?

Whoever or whatever the greater good is/are .. they must be pretty special to have Democrats agree to violate the minority and religious rights of ordinary Mainers.