Catholic Citizens of Illinois: The inconvenient truth about vaccines 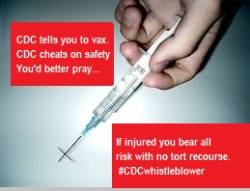 “Skepticism is the first step towards truth,” Denis Diderot, 1746.

Has our government ever been wrong? Has it ever been deceptive? The answer of course, to anyone who knows our history, is yes! Here are a few examples:

History is fraught with the horrors that eugenics inflicted on the world. The most prominent example is, of course, Adolf Hitler’s Nazi Germany, but what isn’t well known is that Hitler was actually influenced by eugenics-inspired policies implemented in the United States during the early part of the 1900’s. Eugenics is the belief that in order to “improve” the human species, only people with “desirable” traits should be allowed to reproduce. This philosophy was responsible for the forced sterilization, perpetuated by the U.S. government, of thousands of “unfit” or “socially inadequate” Americans.

From 1962 to 1975, tens of thousands of U.S. military personnel were exposed to the toxic herbicide Agent Orange, while serving in Vietnam. Agent Orange was part of the U.S. military’s warfare program, Operation Ranch Hand, and was used to eliminate forest cover and crops of the North Vietnamese army. Contamination by this toxic mix of chemicals has been linked to dozens of serious health problems in Vietnam veterans and continues to pollute portions of Vietnam where the chemicals were sprayed.

It took the U.S. government decades to finally admit that exposure to the chemical poisoned thousands of U.S. military personnel, after initially vilifying those who claimed they had been harmed by the substance.

Beginning in 1932 and ending in 1972, the U.S. government, in conjunction with the Tuskegee Institute, conducted a study called The Tuskegee Study of Untreated Syphilis in the Negro Male. The study involved 600 African American men, 399 of which had syphilis and 201 did not. The purpose of the study was not to treat these men, but to observe the natural course of untreated syphilis. The participants were not told the purpose of the study. “In fact, the men had been misled,” according to the Centers for Disease Control and Prevention (CDC), “and had not been given all the facts required to provide informed consent.”

The study ended only when an Associated Press article, some 40 years after the study began, blew the whistle on what was going on. In 1973, a class action lawsuit was filed on behalf of the study participants and their families against the U.S. government, and in 1974, a $10 million out-of-court settlement was reached.  READ MORE at Catholic Citizens of Illinois here.

The article barely touched on cell lines WI-38 and MRC-5 being used. Here is some more information below:
http://www.immunize.org/talking-about-vaccines/vaticandocument.htm

Watch Dr. Garth Nicolson on weaponized Mycoplasma bacteria and Gulf War Illnesses. Why did many come back from the war ill and then their families became ill, too?!
https://youtu.be/sT25HhAVhhU

This article in the Catholic Citizens of Illinois seems to me to represent a sea-change in our battle for publicity of the vaccine issue. When the subject gets aired and discussed in media outlets which are not specifically about vaccines, the "enemy" will no longer be able to sensor us as they are now trying to do, because they can't silence journals randomly just because they don't like one article. Very good to read this excellent piece. Maybe we should all try to get the message out in unexpected locations!

In my opinion the work of the Nazis is the same eugenics programme directly linked to the companies that made the gas for the chambers ,the fluoride in the water etc.The modus of the so called Drs continued on by Jonas Salk etc well illustrated in Jonas Salk`s book worth a read Jonas Salk:The Survival Of The Wisest 1973.

"In 1972 Salk wrote a book- The Survival of the Wisest. As it turns out, Salk was a Darwinist who also believed in Eugenics. In other words. he was one of the pioneers in the population control crowd. At the risk of sounding like a conspiracy theorist, it may be that the carcinogenic SV-40 wasn't in the vaccines by accident. After all they knew the ramifications. I may not be a biochemist, but I can see some unsettling similarities... Ebola and AIDS all come from mutated proteins in monkey cells."

I cannot understand how anybody can trust or have confidence in our public health regulatory agencies .. CDC, FDA, HHS, etc? This article highlights just a few of the MANY MORE instances throughout history where these federal public health agencies have deliberately deceived the people they are supposed to be protecting from various products and policies they KNEW where not as "safe and efficient" as they claimed them to be.

The article concludes: "Call your Congressman and demand answers. Nothing will change until Congress feels public pressure to clean up its act and offer greater oversight of the pharmaceutical industry and the CDC."

Unfortunately .. in my personal opinion .. mainstream media is far more the PROBLEM then are our Congressmen. While it is convenient to blame the SWAMP .. and by SWAMP .. I include politicians, public health officials, medical professional organizations, pharmaceutical industry .. and .. THE MEDIA.

If a tree (a metaphor for vaccines) falls deep in the woods … we would never know it .. UNLESS THE MEDIA REPORTED IT TO US.

That is the sole purpose of the media .. the sole purpose of providing "freedom of the press" in our Constitution .. and when the media chooses to ignore, deny, omit, silence any information regarding that tree (vaccines) falling … THEY HAVE FAILED THEIR GREATEST RESPONSIBILITY … THEREBY MAKING A MOCKERY OF OUR FOUNDING FATHERS WHO KNEW HOW CRITICAL TO OUR REPUBLIC A "FREE PRESS" WOULD PROVE TO BE.

If I were to choose the biggest threat to the health of our children and our country .. IT WOULD BE OUR MEDIA … COWARDS ALL.