The Aspirin a Day Science is Unsettled and on St. Joseph's Day No Less! 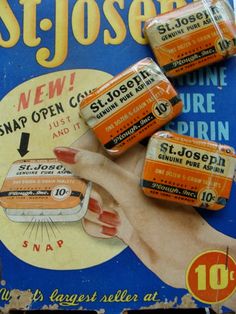 My goodness. How many times have we been told, "The science is settled. Vaccines do not cause autism?" Yesterday, which happened to be the Italian feast of St. Joseph, news outlets reported that an aspirin a day is no longer recommended for the elderly.

By the way, shouldn't HPV vaccine inserts, rather than just saying they haven't been studied for potential carcinogenicity mention that increased cervical cancer risk?

Baby aspirin (for inflammatory heart vaccine injury?), statins blocking cholesterol (rather than mercury/aluminum detox maybe from vaccinations...), chemical imbalance theory (or vaccine induced imbalances?) selling SSRIs and other psych drugs. Anti-inflammatory drugs make up the largest pharma sales category? Sun is bad. Sunscreen is good. Organic food, rather pointless. Vitamins don't work. Don't talk about dental damage from mineral channeling disruptions and imbalances, drink fluoride. And the mercury is sealed in those amalgams. Irradiation is the only "proven" cancer therapy (but HPV vaccine, now, it's probably good too, "Did you know?" and what vaccines are studied for carcinogenicity besides HPV accidentally--that increased risk signal if already not HPV naive)? Do irradiating mammograms prevent breast cancer, too, or just detect more non-lethal cases? Alzheimer's is "genetic," autism is "genetic" or rather "epigenetic," dementia could be "genetic" (but those genes are on the rise and turning on everywhere), diabetes and every other autoimmune condition, "genetic," or "nobody really knows what causes" fill-in-the-blank immune system to fail or turn against the body and environment...or deny symptoms are anything other than psychosomatic. Birth control pills seem to have some efficacy (is there some real motivation to "cure" there?) and I'm surprised they're not credited with reducing sperm counts too somehow, but calling the hormones, also for HRT, "bioidentical" and these concoctions "safe" is another thing...

MO, "Benefit$$$$s of vaccines far, far outweigh the risks!" is, frankly, the only true statement really driving pharma sales (but even then you have to understand what's true--so far--about it).

I dont see anything here. Aspirin every day has never been recommended for people without risk factors for heart disease due to bleeding risk. Its also not good for those who drink a lot due to its affect on the liver.

Vaccinations (to prevent nothing), Aspirin (to prevent heart attacks), Statins (for Cholesterol) and Fluoride (in the drinking water) are biggest frauds on Americans. There are many other pharma frauds, but these 4 are big. These 4 products are causing endless miseries for American families.

Any drug has therapeutic effect(s), adverse reaction(s) and side effect(s). Vaccines, Aspirin, Statins and Fluoride are not exception. We are seeing the results everyday.

Aspirin is a blood thinner, so if it prevents a blood clot which would otherwise impede circulation, it could prevent a heart attack or stroke which would otherwise ensue. That's true and continues to be true. They have also known for many years that sometimes it's not a good idea to prevent blood clots, that sometimes the lack of blood clotting is a serious problem itself, and can cause a hemorrhagic stroke.

This is an ideal area for naturopathic and homeopathic treatment. Irwin sells several products which prevent and treat heart disease on many levels. Hawthorn as an herbal tincture will treat heart disease gently and safely. Homeopathy has many remedies, including what I personally like and have seen work, combination remedies. I said last year that our parakeet Sprite was close to dying of heart disease, with the same dramatic symptoms of heart disease which had killed several of our parakeets. I searched online and found a Canadian company called Homeopet (Homeoanimo in its French branch). I bought its combination remedy Heart (when it ran out, I bought Coeur), at first put a few drops with filtered water in a spray bottle and sprayed his head with it several times a day (to get it into his eyes, where it was absorbed), then just put a couple of drops into their water. And by golly, within a few days he was much better and in a month or so was completely cured. That was last March, a year ago, and he's still happy and healthy, flying around the room and chirping vociferously for much of the day. I put a little Heart remedy in his water every few weeks now, also on different days Kidney Failure (Insuffisance rénale).

This is a much safer and more effective way of dealing with heart disease and, really, every other health problem known to man for animals or people.

So even if the health "authorities" are now trying to drive the sheep into the expensive drug fold, we don't have to do it. The Irwin remedies are maybe thirty dollars, Heart was forty dollars, and individual remedies are less than ten dollars each, and safe, unlike all pharma drugs.

That being said, we may be going back to a time when we need to get information on alternative medicine and the dangers of vaccines from magazines which come in the mail if the Internet is shut down to us. There will probably be publishing houses for verboten topics which will mail catalogues. The way all of us lived thirty years ago, and at the time it seemed normal, and I still started learning about the dangers of vaccines in pet care books like Dr. Pitcairn's Natural Health Care for dogs and cats. I had a subscription to Mothering twenty years ago, before Mothering went all online.

Could there be a Google/Facebook/Amazon/Youtube alternative? Something's up with my Google account, it freezes and doesn't do anything if I type in a vaccine related query. So now I use Duck Duck Go or Yandex as my search engine instead. Firefox rather than Explorer. A Mexican friend tried to get me onto a FB alternative called High Five, or something like that before he, too, got a FB account.