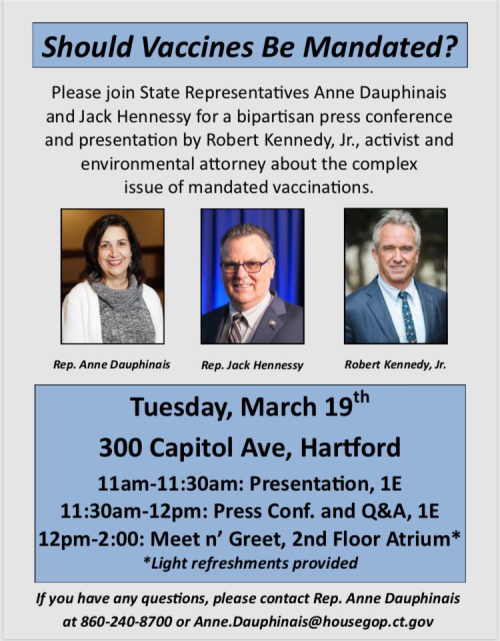 Josh Elliott wants to give CT residents the opportunity to plan their own death.  He also seeks to allow the incarcerated to vote to protect their American rights. Admirable. And yet in a twist of irony,  he

seeks to control medical decisions whilst alive. He wants to remove the religious exemption to vaccination.  This means forced vaccination.  Disenfranchising Americans based on vaccination choice is acceptable?

HARTFORD, Conn. (AP) — A Connecticut lawmaker who supports eliminating the religious exemption from vaccinations for public school students is holding an informational forum on the science behind vaccines.

Robert F. Kennedy Jr., an environmental lawyer and president of Children’s Health Defense is also scheduled to participate on the panel. Kennedy is a vaccine skeptic and has testified in other states against legislation requiring vaccinations.

Slightly different slant from Rep. Elliott than in some statements on Facebook, though with the way this writer represents the issue (walking a vaccine-skeptics-are-refuted sounding, but very thin line "according to the CDC"), she may be very selectively quoting.

“Medical professionals began trying to kill the forum because they felt we would be legitimizing debunked claims from someone who has demonstrated the inability to sift through the truth from fiction," state Rep. Josh Elliott, the Hamden Democrat who organized that event, wrote on Facebook. “I am concerned with the perspective the medical community has taken — in that it is better not to have the conversations publicly. If we believe in the science, we have nothing to be concerned of. We cannot speak to those who are true believers — but there are more out there who are simply uneducated on the science of vaccination.”

Maybe he is feeling a hint of having been a bit taken in, too?

Monica--They canceled because Robert Kennedy was going to whip their butts. The panel violated official government vaccination policy as cited below:

“There are groups out there that insist that vaccines are responsible for a variety of problems, despite all scientific evidence to the contrary. We [DHHS] have reached out to media outlets to try to get them not to give the views of these people equal weight in their reporting.” Kathleen Sebelius--Secretary of DHHS, February 2010, Readers Digest

“…any possible doubts, whether or not well founded, about the safety of the vaccine cannot be allowed to exist in view of the need to assure the vaccine will continue to be used to the maximum extent consistent with the nation’s public health objectives.” Department of Health and Human Services (DHHS) Federal Register Vol 49 No 107 June 1, 1984

Why did Yale bail out? What was the excuse?

I had my tax return done last week and told the tax preparer about my daughter's encephalitic reaction to the hep-B vaccine given without my permission or knowledge at midnight the day she was born. She was an older woman, very nice, and was surprised. I said the vaccine had caused hundreds of thousands of cases of autism at the least, and she said Well, surely they've stopped giving it! I said, no, on the contrary, they're still giving it to almost every newborn in the country. And that the autism rate continues to rise, now one in 36 children. Probably from more children being brought into compliance with the vaccine schedule, as I don't think any additions have been made recently.

RFK now one of the few elderly statesmen whose eyes are not wide open shut to the multitude of vaccine damaged humans.All to convenient to believe in `The Treachery of Mirrors ` as Samuel Johnson coined it .

RFK sees all our vaccine damaged kids/adults everywhere in every walk of life .

RFK Jr is a strong voice but Barbara Loe Fischer, NVIC, should be there as well.

Cia,
You are so right about a generational knowledge gap about vaccines.
They don't understand the financial windfall that comes with getting a vaccine on the childhood schedule, that the schedule is already immense, and will not be static.
Nor do they realize that vaccines are liability free, and manufacturers can't be sued for defective, harmful products.
My fellow seniors are always a little shaken when learning that hours old infants are vaccinated, and for a disease they are not at risk for.
I certainly had no idea, sadly.

I am attending this event tomorrow and will be streaming it in.

Democratic Rep. Josh Elliott of Hamden needs a primer on vaccine facts from RFK. The pseudo-science is on the pro-vax side.

I agree that it's not complex at all. I think the problem is that the "authorities" are older people whose children were born before the vaccine and autism epidemics began around 1990, and they just haven't noticed all the autistic kids around now. To be honest, I've only seen a few outside the special ed settings my daughter's been in since kindergarten. So I think most of them honestly don't believe that there's been a staggering increase in numbers. They think it's still the way it was thirty years ago, when everyone had gotten a number of vaccines and almost no one had been obviously damaged by them. And their pharma handlers encourage them in this misconception.

Nothing complex about this issue at all...no medical treatment, procedure, or product should ever be mandated, including vaccinations...period. Simple as that.

Well darn it; after all these years I am finally in a vocal minority. Who knew!

I want all the Yalies (Omer?) to declare their COI and patents.

putting the decision making in the hands of a doctor who can't be held accountable, to inject a product whose manufacturers have wiped their hands?- nah.

Just curious .. wondering if that 18 year old who testified at the Senate hearing regarding his anecdotal experience of vaccinating himself is going to be among the "experts, including Yale professors"? Got to give the guy credit for allowing RFK to participate as member of the panel.