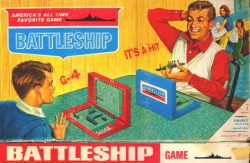 We have a military ship that is a sitting duck in quarantine for what may be mumps. Had Merck come clean, would this ship have been at work?  When Battleship - the game - first appeared on toy store shelves, mumps was a common childhood disease. Now mumps sunk our....

Two former Merck & Co. Inc. (MRK) employees have sued the company in federal court alleging Merck overstated the effectiveness of a mumps vaccine for which the U.S. government paid hundreds of millions of dollars.

Merck--which stressed that none of these allegations relate to the safety of its product--said the lawsuit is "completely without merit", and that it plans to "vigorously defend itself." The Whitehouse Station, N.J., drug maker also noted that the U.S. Department of Justice has thus far declined to participate in the case after its own two-year probe.

Mumps is a contagious disease that causes symptoms like fever, headache and swollen salivary glands. It was a common illness for kids and young adults before childhood vaccinations became common decades ago, according to the Centers for Disease Control and Prevention, although there were outbreaks in 2006 and 2009. The agency says vaccines are the best way to prevent mumps.

Merck introduced the first vaccine 45 years ago, and since the 1970s it's been part of a combination product that also immunizes children against rubella and measles. According to the lawsuit--filed by former Merck virologists Stephen Krahling and Joan Wlochowski--the company allegedly defrauded the U.S. for more than a decade by hiding the fact the vaccine had become less effective.

As a result, the former employees say the government has long paid for a product that doesn't live up to Merck's claims. The lawsuit seeks a judgment against Merck equal to three times the damages suffered by the U.S., plus the maximum allowable award for the former employees under federal whistleblower laws. Read the full story at 4-Traders.com.

And since nothing has changed there are a few people in Quarantine in the Texas Valley in 2019. Calling 5 people an outbreak to spread fear, And people are acting stupid like everyone is going to die now blaming the unvaccinated.

Forms of the MMR are being used to Force parents to vaccinate their kids in order to go to school. This is one of the reasons that parents lose their philosophical and Religious right to say NO to Aluminum, human fetal cell DNA, cancer promoting formaldehyde and more and yet there is a Law suit pending for nearly 10 years that test results were manipulated to make it appear as if the vaccines were efficacious or safe. What will happen first-more vaccine mandates or the public will learn in headline news that vaccines do not work as declared?

Thanks for the link. 9 years later and the case drags on for an urgent and costly-to-taxpayers matter. Apparently, our justice system is as broken as everything else in our country.

Additionally, if our government regulators, public health officials, and legislators cared about “public health” as much as they claim/feign to do, they would have launched their own investigation and acted on the two whistleblowers’ confessions themselves back in 2010.

this has a link to the amended complaint for Krahling and Wlochowski v. Merck & Co.

So you're saying the sailors have mumps?