Vaxxed has been removed from Amazon's Prime streaming service. The DVD remains available and is ranked Number 1 in the entire category, even beating out... Mr. Rogers and RBG. See screen photos below.  American business is now fully embracing censorship of the vaccine safety topic. The efforts of producers like Del Bigtree, which have hardly been lucrative, these films are not award winning Hollywood fairytales, and are being treated like snuff films.  This behavior is more becoming of North Korea than any nation in North America. Let alone the USA.

New York (CNN Business)Amazon has apparently started removing anti-vaccine documentaries from its Amazon Prime Video streaming service. The move came days after a CNN Business report highlighted the anti-vaccine comment available on the site, and hours after Rep. Adam Schiff wrote an open letter to Amazon CEO Jeff Bezos, saying he is concerned "that Amazon is surfacing and recommending" anti-vaccination books and movies.

Anti-vaccine movies that were previously available free for Prime subscribers, like "We Don't Vaccinate!," "Shoot 'Em Up: The Truth About Vaccines," and "Vaxxed: From Cover-Up to Catastrophe," are now "currently unavailable."
BuzzFeed News was first to report that "Vaxxed" was no longer available. Amazon did not respond to questions about why the films are no longer available on Prime Video. 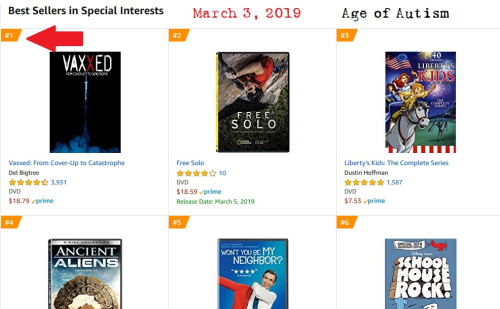 Would be great if someone could share an email for amazon inquiries/comments so we can send in our thoughts to them. I'm personally halting any amazon or audible purchases until these products are available again.

Today the Philadelphia Inquirer printed yet another article by Paul Offit, in which he gloats that Pinterest, YouTube, Facebook, and Amazon have all recently started censoring antivax information. He also brushes off the issue of free speech by lamely resorting to the "fire in a crowded theater" SCOTUS ruling. Except free speech covers shouting fire in a crowded theater when there's really a fire.

I am also thankful for public libraries. However, public libraries are local governmental entities. As such they are vulnerable to pressure to comply with bans. I can think of a number of ways that public libraries could be intimidated/forced to remove ebooks, paper books, and DVDs from circulation. If this censorship goes on long enough, the banners will get around to the public libraries.

Regarding Schiff's power over Bezos, Amazon has been competing for a $10 billion US gov't contract.

The movie MAN MADE EPIDEMIC has been removed from Amazon Prime, along with a host of other good movies that I was hoping to watch. It's here, Amazon is halting the distribution of information about vaccines. Next thing you know JB Handley's book will be taken down.

Thank you. I was prompted to pay to watch it through Vimeo today, before it disappears altogether. Thank goodness for public library and paper books. Evidence of Harm is what originally alerted me to the issue of vaccines; I read it in 2005 and have followed your page ever since. Thank you for the work that you do, A of A.

Dawkins DeGrasse Sagan, you're wrong on two counts. Censorship is censorship, whether it's carried out by the government or by behemoth corporations. The old Hollywood Blacklist was enforced by the big studios, not by the government, but I think you'll admit that it was a shameful example of censorship, which is now being repeated. And Amazon carried out this policy in response to pressure from a powerful politician (Schiff), who could sponsor retaliatory legislation if Bezos doesn't comply. Then it clearly becomes a First Amendment issue. It's also a tacit admission that your side is losing the public debate over vaccine safety, and therefore is bending every effort to shut down that debate.

"Free speech"? Wrong argument. Amazon is a private company, and if they want to stop the (exuse the pun) plague of dangerous bad science, then they can It's their prerogative. https://www.cnn.com/2017/04/27/politics/first-amendment-explainer-trnd/index.html

Is it true that the US Postal Service has been giving Amazon special shipping rates that give them the pricing edge they've seemed to have for years, knocking out competitors (as well as being low enough to not turn a profit I think I've heard for several years, but still somehow attracting long term investors--we really need to make the investment income side of our governmental entities transparent)?

If so, then I think this is really two arms of the same colluding cronyism (fascist) partnership moving in after creating a near monopoly to use one of their industry monoliths to apply blatant censorship on a topic that of course they believe will have people demanding their own muzzling.

But there is some backfiring in this:
https://www.jeffereyjaxen.com/blog/vaccine-censorship-backfiringwhat-to-expect-next

Bob, In 1998 a librarian told me Amazon would win the book selling war because it just bought the last physical book manufacturer in this country. Meaning the books Borders and Barnes & Noble were selling, would be coming to them wholesale from Amazon. The key to this battle is to find out who actually owns the big 4 vaccine producers.

We need to stop pairing the words “vaccine” and “safety”. The topic of concern is “vaccine dangers”.

This really is the twenty first century equivalent of burning books.

And a measure of the desperation in those who know they can only delay being called to account for one of the worst crimes in human history.

I have an entire library of books on vaccines .. both pro and con .. all bought from Amazon .. probably worth close to a thousand or so dollars. In fact .. the ONLY books I buy and read are books about vaccines .. wonder how many others out here are the same as myself .. would love to know the financial profits books and movies on vaccines have bought to Amazon?

As I said .. at one time the two major bookstores in US were Borders and Barnes & Knobles .. which voluntarily refused to sell many best selling books by conservative authors .. the arrival of Amazon just about put those former dominant bookstores out of business because at that time Amazon was in the business of SELLING BOOKS. Today .. just like Borders and Barnes & Knoble before them .. Amazon is no longer interested in just SELLING BOOKS .. they have adopted the failed business plan and are now CHOOSING WHAT BOOKS THEY WILL ALLOW THEIR CUSTOMERS TO READ.

Trust me .. as these giant monopolies of INFORMATION .. google, facebook, twitter, Amazon .. censor more and more of the information they SELL .. they will create a market that will soon compete for the MILLIONS of people who want to decide for THEMSELVES WHAT INFORMATION THEY SEEK.