A Witch Hunt Against Parents of Unvaccinated Children 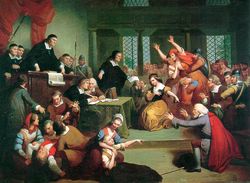 From the Alliance for Human Research Protection:

Measles Outbreaks: How a Witch Hunt* Against Parents of Unvaccinated Children Was Unleashed

We are witness to an orchestrated frenzy that has been revved-up by vaccine stakeholders – i.e., those who have a direct or indirect financial stake in vaccines– through the corporate / academic institutions that employ them. Their unified objective is to achieve maximum utilization of vaccines, and total compliance with vaccination schedules set by the government in collaboration with vaccine manufacturers.

Contrary to the barrage of “fake news” promulgated by government public health officials and the media to influence public opinion, the fact is, most childhood infectious disease “outbreaks” include both vaccinated and unvaccinated children. What’s more, when the infection has been tested, vaccine strain has often been identified as the cause of infection.

In 2015, a “measles outbreak” in California’s Disney Land garnered nationwide front page publicity and dire warnings by public health officials and vaccine “authorities”. They generated high public anxiety. This fearmongering led to the demonization of unvaccinated children, who were perceived as the spreaders of disease.

Never disclosed to the public, but known to CDC officials is the following evidence that has finally been published in the Journal of Clinical Microbiology (2017):

“During the measles outbreak in California in 2015, a large number of suspected cases occurred in recent vaccinees. Of the 194 measles virus sequences obtained in the United States in 2015, 73 were identified as vaccine sequences (R. J. McNall, unpublished data).” [1]

Rebecca J. McNall, a co-author of the published report, is a CDC official in the Division of Viral Diseases, who had the data proving that the measles outbreak was in part caused by the vaccine. It is evidence of the vaccine’s failure to provide immunity.

But this crucial information has been concealed, and continues to be withheld from the public.  After all, how many have read the belated disclosure in the Journal of Microbiology?   Read more at AHRP.org.

Marie, My son had to get the dtap to enter 7th grade. He was diagnosed with keratoconus the following year and he has lost vision in one eye. I don't believe my son pushes his eyelid sideways separating it from the eye because he is autistic (which is what the doctors say.) I believe he does it because his eyelids bother him. He is non-verbal so he can't describe the irritation.

My kids didn't have many vaccines (first had reported reaction to first dtap). my daughter had measles only at 5, my son just had mmr at age 9 three weeks ago. he started blinking and rubbing his eyes for a week, now this week he is blinking 100 times an hour like a tic. i regret falling into the trap, i just assumed he was old enough to handle it. Did anyone else experience this?

As part of an old witch hunt, those suspected of being a witch had their hands and feet tied together before being thrown into a body of water. If she Drowned to death, she was not a witch. If she floated and survived she would be killed because she survived and was a witch. Either way those women were doomed.
Today,s children have countless numbers of illnesses. They feed the Cancer wards, Psychiatrists offices, ABA therapist's centers, special education, Speech, Occupational and Physical therapy logs, hospitals, keep the Epi-Pen Market profitable and vibrant, line up at schools in nurses offices for medication, expand the diapers- for- adults industry, and generally keep the economy flowing in the areas of products and services. Are our children able to swim or float?

As recently reported over a few days on Foxnews … the Russians are being accused of using "trolls" on the internet .. the same 'trolls" that we have been told tried to influence our last Presidential election .. to sow discord and dissent against VACCINES .. and .. when you think about it .. why not the RUSSIANS to unleash a WITCH HUNT against parents reluctant, hesitant or just refusing to vaccinate their children .. a WITCH HUNT with the Russians as the enemy has worked so well against our elected President.

I just posted this comment under Jena Dalpez's article 'Shut Out, Shut Up: The Help Hearing'

This may also stand as a response to Vera Sharav's 'A withch-hunt against the parents of unvaccinated children'
https://www.ageofautism.com/2019/03/a-witch-hunt-against-parents-of-unvaccinated-children.html

They only want to hear one side of the story hence they are not interested in the truth. They not only rig the reality, they rig the process: an 18 year old boy denounces his parents, and he is regarded as an expert, the objectors are not only excluded from the evidence, they are excluded from the room - this is perhaps the most repulsive and lowest level politics we have seen in the West for a long time. Jena Dalpez paints a horrifying picture of the United States finally disintegrating into the totalitarian barbarity of National Socialist Germany and Stalin's Soviet Union. People who pose as liberals in the mainstream applaud this parody of process. Meanwhile the same dark curtain is being drawn across the globe through the Obama Global Health Security Agenda:

What a legacy to his presidency!

Most people still do not understand was implied by this oppressive process, they think it is probably marginal at worst to the democratic order and to institutional accountability. But it is not what people thought at Nuremberg seven decades ago. It is a loss not only of intellectual autonomy but also the final loss of one's body to the state. Next to Heinrich Heine's syllogism "Where they burn books, there they will burn people" should stand "Where they can inject people with anything, they will".