Vanished with a Trace

Cathy JCathy is away with family. Here’s a “Best of” frpm a decade ago with an updated photo of handsome Ronan, who just turned 16.

When I want to be a couch potato and stare bleary-eyed at something other than my computer screen I watch those 20/20 and 48 Hour television shows. I like the informative, educational and entertaining twists presented on prime time. I’ve always been an info junkie which I am pretty sure has helped me find and bring back my son injured by vaccines.  While Ronan never physically left me, his body shut down from the top of his brain that stores his intellect to his tippy toes that tell me constipated poops are on the way.

Television news in late 2007 had me so riled up though. I didn’t have the desire to watch another report about the flu season creeping up on America. The inevitable flu shot promotional parade began with media ads plastered everywhere. I couldn’t even go grocery shopping without running into a flyer luring shoppers into a flu shot frenzy.  Later, I didn’t have the heart to hear about tainted vaccines recall or the blaring Gardasil prime-time commercial spot.  Yet despite all the fanfare, the vaccine-connected autism I believed to be true never seemed part of the broadcasts. Who wants to watch the next generation succumb to mainstream media’s misinformation as my own son did?

I’ve become a scientific seeker of truth and, as The X-Files claims, the truth is out there. I want to know everything there is to know about vaccines from their toxic ingredients to their long-lasting effects. Unlike television’s reality shows, my reality involves reading, utilizing and sharing the information I’ve gathered with listening ears of family and friends.  I was drowning in the flu shot frenzy when I again became angry about what we parents have gone through with our vaccine-injured children.

This year’s flu shot is apparently ineffective for the current flu strain according to a CDC report from February 2008. What do you say to those people who diligently lined up being assured they were doing the right thing to prevent a flu epidemic?  Come on, people, how can we put up with this?  Oh, sure we’ve been promised that the 2008-09 flu shot is going to get a ‘makeover,’ but how dare the public be lead astray yet again about vaccines!

I admit that just a few years ago, before I had a clue, I was one who believed the flu vaccine hype.  I insisted my two oldest children got their jabs. Unfortunately it was that flu shot that was the final straw sending Ronan over the edge to neurological misfortune. Unbeknownst to me he was deteriorating slowly from his other childhood vaccines.  The two flu vaccines he received right before his second birthday brought him into a world I’m scrambling to bring him out of.  Ronan’s sweet, bubbly, curious personality vanished thanks to traces of thimerosal coursing through his tiny veins.

My research takes me on a roller coaster of sorrow and anxiety. I watch Ronan flounder as he also rides a non-stop roller coaster of impatience, struggling to communicate, straining to be like his siblings but unable to figure out how, eager to function like a five year old but with only two- or three-year-old skills.  He knows he is different and he doesn’t seem to like it either.

Fortunately here’s a silver lining to the dark black cloud that tries to follow my child.  I see a fighter in Ronan lately which gives me hope. The little lost boy now shows new skills he should have perfected years ago. When Ronan fell today, I went down to the floor where he stumbled to offer a hug. I wondered if he was going to react like he had a week ago when he stubbed a toe—he wanted comfort and instantly.  Today, Ronan lifted his leg and showed me where it hurt!  Not long 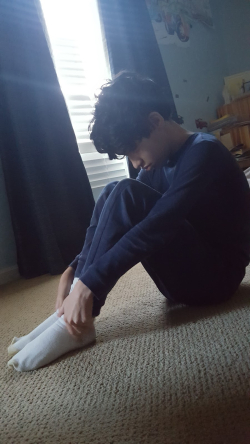 ago, Ronan would have picked himself up from the floor without batting an eye and gone to flick a light switch or cabinet door. Three years ago, Ronan was in such a fog that he held his hand above a candle flame and didn’t flinch. His skin was going to singe and he could care less.  As I tended to Ronan’s “owie” from his fall, he immediately wanted a hug too--not just a squeeze and let me go play, but a pick me up off the floor and hold me, Mama hug.  I melted.

Late one evening I watched an evening magazine show all about young twenty-somethings going off to start their careers abroad and then being kidnapped.  Some were even killed for no logical reason except that evil people exist in the world. While I certainly cannot compare the pain and anguish of the physical loss of a child, I can empathize with those parents. They immediately wanted answers about their child’s safety to include searches done by the authorities. For those who perished, parents wanted justice for their adult child’s perpetrator but were running into trouble due to red tape from paperwork, inadequate researching and cover-ups from the authorities.  Emotions came over me.  These parents of typical children were robbed, like me, of peace, comfort and the truth.

At the end of the show I realized that, despite my roller coaster life, at least I still have Ronan here, close to me, improving, moving, sharing and loving me in the only way he knows how. Ronan gives me his quiet hugs full of wonder and innocence. I’ll take those hugs now and keep marching forward on our road to recovery, hoping and prayer that a body riddled with injected toxins and befuddled emotions can become a chatty, healthy and typical kid.

Prayers for a happy, peaceful, and healing Christmas for you and your family!

Thank you, Susan. Wishing you all the best in the new year as well. xo, Cathy

Thank you Cathy for, as always, a powerful article.

Wishing you and your lovely family a very happy Christmas and a peaceful new year. May 2019 be filled with lots of progress for Ronan.

I read this newsletter every day and I read about Ronan and your colleagues three girls. You know for a fact it was Thimerosal. Why aren't you chelating this child? I will be happy to guide you through the process of AC chelation at no charge. That is the only thing that is going to heal your child. Everything else is going to be a band aid on the situation.

The soaps have people more interested than who killed the soap villan than the numbers pharma is killing daily by the minute .Schedule TV its a con-suck.I remember just recently a woman literally falling out of the local doctors which is opposite a large food store. car park.The woman seemed to trip and collapsed.I went over and so did several other people.One of them being an of duty paramedic and the woman who fell siad she just had had her flu vaccine and felt dizzy and fell.The of duty paramedic said not another one.He said he had taken several people that week to emergency after the flu vaccine.I think the people that came to the lady that day needed no convincing and would have went home and spread the good word.The flu vaccine caused an old woman to collapse.

Seasons greeting to all Cathy.