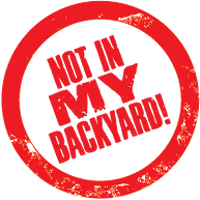 Note: You can smell the irony in this story like a horse farm behind a pig farm next to a cow farm on a hot Texas day. New Jersey has one of the highest autism rates in the nation. The cute kids everyone buys blue light bulbs for in April in a do nothing feel good effort are going to grow into adulthood. The ones who aren't killed by a restraint or murdered by a distraught parent or drowned as a result of wandering, that is.  For those who grow into adulthood the questions never end for families: Where will they live? What will they do all day? How will they survive financially? Who will care for them now and when we die? The stress and anxiety is crippling in so many ways.

So imagine the revulsion we feel toward people who would be so against a community of people with autism that they would defile the property bought to create a loving, safe home. A home for people like  your sons, daughters and my daughters.  I picture a bunch of Hunter booted women in $100 yoga pants creeping across the property to wreak havoc late at night in a last ditch effort to chase away the...autistic.  In some states, group homes for autism are also including SEX OFFENDERS. Can you imagine a more dangerous "roommate" for our loved ones?

In 2019, we are launching a new member of the Autism Age non-profit family called Autism Ages. We'll be a community of diverse voices sharing ideas, helping each other learn how to navigate the future for our loved ones and I hope, learning from adults on the spectrum who will join us. Stay tuned. If you want to be an early participant, email me at AutismAges@gmail.com. We also have sponsorship opportunities.

MIDDLETOWN - When a charitable organization tried to buy a farm on Middletown’s affluent Navesink River Road to use as a home for adults with autism, neighbors went to great lengths to block the sale and even tried to bribe the seller to back out of the deal, court papers allege.

When that didn’t work, and the sale went through, neighbors embarked on a pattern of harassment that included debasing the property with menacing graffiti and dumping hundreds of pounds of horse manure on the grounds, the court papers said.

But a panel of appellate judges on Monday reinstated the lawsuit, saying the overarching goal of the Law Against Discrimination “is nothing less than the eradication of the cancer of discrimination."  Read more at NJ's App.com.

Yes, even people who start worthy charities can be deceitful.

I and my family, while setting up a smallholding, have suffered all this and more. Even worse, the police, local council and the courts took the side of the criminals. I'm afraid the mentally disabled are at the very bottom of the pecking order when it comes to prejudice. I've even been taken advantage of by a physically disabled lawyer!
Looking on the bright side, the horse manure will come in handy for growing tatties.
Wishing these good people better times to come.

Well, it is even worse than what was initially reported, apparently. According to NJ1015.com, a radio station in NJ, those against the farm erected a fence without any gate on the property which prevented emergency vehicles from entering. That's sociopathic and sick, and so mean spirited that I hope they get slapped with criminal charges of unlawful tresspass and whatever else NJ officials can possibly throw at them!

This is the cruel country we live in. While the autistic may have needs, those deemed "normal" are empty, without souls.

It seems the opposition of the neighbors was based on a misunderstanding of the facts of the case in the so-called "Sandy Hook Shooting" case of Adam Lanza. Apparently, Adam Lanza was once diagnosed, correctly or not, as having Aspbergers. What is NOT in dispute is that he was given powerful psychiatric drugs. But since autism is not a mental illness, autistic kids aren't given psych drugs. Have I got this correct? The more I try to study these cases, the more confusing they become, and the harder to nail down facts. But I see no rational or legitimate reason to oppose a home for autistic persons. Only very rarely is "NIMBY" logical, rational, or legitimate.

"But Oasis has said that its new center faced almost immediate backlash, with local couple Peter and Susan Wade driving the resistance. Oasis said the Wades went door to door to drum up opposition to the grant, and then approached the property’s owner to buy the property before Oasis could, only to back out of the deal at the last minute when it seemed Oasis was no longer interested.

When the property owner agreed again to deal with Oasis, the owner received anonymous letters asking, “how can you live with yourself?”

Despite alleged attempts by Peter Wade to keep the center from use the shared driveway and to have the easement revoked, Oasis Therapeutic Life Centers closed on the deal.

This did nothing, however, to stop the harassment. The organization told the court of an illegal fence that blocked an easement on the property, spray-painted graffiti and harassing signs of snakes and fire. It also accused the Wades allowing their animals to roam on the property, describing a horse that left “hundreds of pounds” of manure on the Oasis grounds.

Cleary herself meanwhile was head-butted by a “very aggressive goat” that Oasis accused the Wades of letting onto the property.

After the Wades filed a quiet title action in chancery court, Oasis hit back with claims of discrimination. "

I hope Age of Autism and others plaster Peter and Susan Wade's information and their hate filled actions all over the place. And plaster their entitled backgrounds that they clearly use to promote hate.

What a HORRID couple of people.

My son is a high functioning 27 year old. We have finally found a housing solution that at least partially works for us. He has an apartment one half block from me. We share a car and many meals. I say partially: I am an older care giver (adopted my son when I turned 50) and this is not financially sustainable. But at least it has provided stability. Until...
My son has constant anxiety. He can't regulate his overload and occasionally has autistic meltdowns where he yells, paces the floor and pounds the table.
The neighbors complained and the landlord sent a letter saying if it happens again he will send a three day eviction notice. My son does not need eviction on his record. The lawyer suggests we look for another apartment. This doesn't seem right. We live in California. Any ideas?

Americans need to prepare themselves for a group home on every corner, in every neighborhood, at a bare minimum.

At the rate doctors and nurses are disabling and harming children via vaccinations and other pharmaceuticals, it might be more accurate to say there will soon be a group home every third house.