Maine Seeks to Go from Vacationland to Vaccinationland: Take a Poll Now to Support Vaccine Exemptions 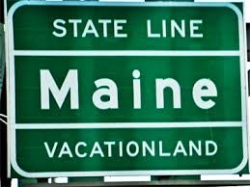 Click over to the Bangor (Maine) Daily News to read this article and take the POLL asking whether you believe parents should have the right to Philosophical vaccination exemptions.  This is not the New England I was born in decades ago - we believe in freedom, even if it means a fight. Ginger Taylor is working hard in Maine to head off this Californication....

Some Mainers are gearing up for a fight over the future of the state’s philosophical exemption for childhood vaccinations, a battle that is expected to play out during the upcoming legislative session.

That’s because many Maine families are choosing against vaccinating their children, and some lawmakers would like to change that. Nationally, nearly 2 percent of parents chose not to immunize their kindergartners for non-medical reasons last year. In Maine, 5 percent of parents of public and private school children decided against immunization, according to the Maine Center for Disease Control and Prevention.

Rep. Ralph Tucker (D-Brunswick) is among the Maine lawmakers, public health advocates, medical professionals and others who want that number to start trending downward. He’s planning to introduce a bill in the next legislative session that would eliminate the non-medical exemption for vaccines, including exemptions for both religious and philosophical reasons, thereby improving the state’s vaccination rate.

I think the insurers know. It appears that they are permitted to continue to raise their rates enough, and compensate themselves handsomely enough, to not sound the alarm, or act as common sense, stats, and ethics would dictate.

Sigh. Insurers are part of the problem, too.

My hope is that finally an insurer will have the courage to do the stats and compare vaxxed vs unvaxxed children, and find out that vaxxed children have much worse outcomes.

Some places in the world deny access to an education to children because they are female. In this country, we believe it is appropriate to deny a child access to an education because she hasn't been injected with the proper amount of product. So tell me, Representative Tucker, how many vaccines would my unvaccinated 11yr old daughter need to receive in order to continue to access an education in the state of Maine? School mandates are dose specific..... so that means? what? In the state of New Jersey there exists something called Holly's Law. That law enables children who have had one measles vaccine (aka MMR - because there is no such thing as a "measles" vaccine, as this vaccine is not monovalent -do you know what monovalent means sir?) to access an education with only one MMR vaccine if her titres can prove that she doesn't "need" another. That law exists in NJ because Holly was killed by an MMR vaccine.

Let"s talk pertussis. Sooooo, if my unvaccinated 11yr old daughter wanted to access an education in the state of Maine, which is in the Untied States of America, she would need to be injected with how many pertussis vaccines? BTW, that vaccine is not monovalent either. It's becoming readily apparent, sir, that I really need you to know what the word monovalent means. How many flu vaccines would my daughter need to be injected with? Would it be the same flu vaccine that might have killed New York Assemblyman Jose Peralta? There are a lot of specifics you should be aware of t, if you're going to promote a bill that mandates what MY DAUGHTER SHOULD BE INJECTED WITH in order to access an education.

This bill has nothing to do with public health, however it does have everything to do with DENYING CHILDREN ACCESS TO AN EDUCATION! Which is exactly the bar that Pharma is setting. So bring it Tucker, if my unvaccinated eleven year old little girl poses such a public health risk that she is no longer allowed to go to school, then you God damn well better know what the word monovalent means because I guarantee you she does. What fricking country do we live in?!

This is more evidence for why our top priority needs to be the banning of vaccine mandates in all 50 states.

Without unfettered medical choice freedom, individuals and parents cannot protect themselves and their children from the known dangers of vaccines, not to mention the unknown ones.

Exemptions will always be under attack by vaccine profiteers. Without mandates, exemptions become null and void. No one should have to formally opt out of any medical procedure for oneself or one's child. A simple "no thank you" should always suffice.

Vaccine mandates make both informed consent and the ethical practice of medicine impossible...and they violate the fundamental right to decide what one allows, or doesn't allow, into oneself and one's child.

Exemptions are not our battle, mandates are. We need to unite on this front, and fast.

For anyone who hasn't seen my latest presentation, in which I cover the above, here is the AoA link for it, which includes both the video link and the full transcript:

"Why Is This Legal?" by Laura Hayes

when vaccines are indemnified, and doctors can't predict who will be harmed by any given vaccine or combination of vaccines, a philosophical exemption IS a medical exemption by default.