As Autism Ages Stories Like This Will Abound: Man Found at Rest Stop Alone 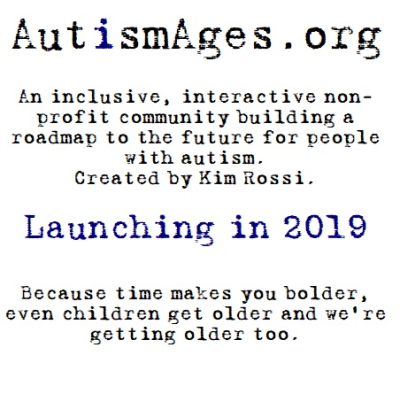 On Friday, this story was circulating on Facebook. A man, (young man) who appeared to have autism was found alone at a Kansas rest stop.  He could not speak. He "seemed lost." This could describe my Bella. Or even Mia, although she has speech. She is rarely able to answer a question without prompting that few in the world know how to offer her. Even my beautiful Gianna, who is as chatty as a magpie, would be hard pressed to provide answers about herself. She could tell you the date!

In 2019, I'm expanding the Autism Age family to launch a wholly new interactive platform called "AutismAges.org." Friends, we're going to have to build our kids' future brick by brick, just as we did with schooling. Because time makes you bolder, even children get older and I'm getting older too. So are you. Email me if you'd like to learn how to be a flagship participant sharing knowledge, ideas, solutions and asking 1000 questions about adult life with autism.

Individuals and organizations are welcome to become category leaders and participants  including adults with autism.   AutismAges@gmail.com

The child located in our county earlier today has been identified. We are in the process of attempting to contact family members or a guardian. Thank you for all the information that has been provided by the community. There is no more need to call at this time.

Authorities in southeast Kansas need the public's help in identifying a young man with special needs who was found at a rest stop.

Greenwood County Sheriff Heath Samuels said a rest stop custodian called 911 at around 6 a.m. Thursday after finding the young man at the Beaumont stop on Highway 400. He's about 6 feet tall, weighs 220 pounds, has brown hair and blue eyes. The sheriff said he may be autistic.

He added, "I don't think he just walked in here. I couldn't find out who he belonged to. Just concerned me for his well-being."

Sheriff Samuels told KAKE's Lily Wu the man is alive and well but can't talk. His office has contacted area schools, but no one recognized him.

Anyone with information is asked to call the Greenwood County Sheriff’s Office at (620) 583-5568.

See Book The Cordach MacKays From Coldbackie By Ian MacKay 2017 .
Preview available to read online . Preview describes Health and Social Care Provision in 1841 and a "Snapshot" of Guidelines and Criteria for "A Ticket To The Poorhouse "
Mum's cousin Recently received an excellent standard of palliative/end of life care, not cancer? Compact and very Capable. 7 Bed Care Facility in Coldbackie, Sutherland.
Present Lucky Bag /Lucky Dip. Basic standards of care provision and support are not getting accepted for folk with Autism either !

AutismAges.org, sounds like a sensational success in the making ,getting started is a good chunk of getting the job done! Individual -Person centred work for short-medium-long term care and support needs planning ,with Life Story Books ! for folk with communication difficulties etc .

Available to read online , A Modest Proposal ; For the agreement of the People By Angus Reid .
includes
if I as a writer of poetry
were called upon to give a form of words
to model the nations behaviour
it would be this
ownership obliges
everyone to respect and to care for
the sacred
to respect and and to care for
freedom of conscience
and to recognise
the gift of every individual
to respect it
care for it nourish it
to care for and protect communities
and
to care for the land
and wherever
the land has been abused to restore
so that it can support all forms of life
five principles five fingers on the hand .
available to read in English or Gaelic

None of the respondents above are staying on point! Here is my suggestion have all of those with severe autism wear a tracker with their emergency contact and there name and address to help law enforcement or fire fighters or whomever find that autistic person's family or group home and also we need prevention to stop wondering in the first place. I know someone will answer my post and talk about ramble on about "privacy" and related issues which include both legitimate concerns and some nonsense conspiracy theories. Who cares will dealing with a severely disabled person as it could be a matter of life or death if they are not found to prevent death usually by drowning! Lastly just because a person is mute does not mean autism there are other disabilities that are a possibility like death muteness or intellectual disabilities and more. Still in those cases there needs to be prevention and medical identification.

I am sad. After years of trying to help my family with their child with Autism, I watch with sadness as we all get older. There's little we could do then and little we can do now. We did all we could when the child was younger. The child remains pretty much, a child in an adults body now. It's maddening, infuriating and sadness to the extreme that our own government and medical society has denied us the help we need. First..they were over whelmed by the extremely large numbers of children needing help...and there wasn't enough people trained to be helpers. Then they denied that it was even real,,from 1988 through today and so continue to create these brain damaged people who will need extra care all of their lives. And there will be no governmental help or special arrangements for their care after we're gone because of the pride of the medical societies in general who deny this disorder exists at all. Those medical personnel who have left mainstream medical to help our children are too often scorned and attacked, lives and careers often times ruined by their colleagues, but They who left the major medical resources have seen and They have dealt with the problem and the people on a day to day basis. They..Know this condition exists and is still growing. And our champion,,the one politician who did stand up for us, decided to no longer be our advocate with the Federal government and other politicians because he doesn't like the current President of the USA. Where did his concern for the injured children go..? Ah, but then, he himself became ill with a speech impediment but,,after awhile, he took up that cross again to help handicapped children but would not serve as a national chairman because of....political 'ism's'?? Soon I will be gone and leaving all behind to suffer more because our government doesn't take control of the medical industry and force them to stop denying the evidence that we all live with every day, or stop the ongoing creation of more brain damaged children, then,,to help us all,with real investigations, not the sham save their faces deals they've foisted on us for all these years. So,what Will become of our children when we're gone? Who will care for them, love them like we do?? I despair. I am ...sad. grandma peg

The United States; the greatest political experiment was working and then every thing went wrong. when the population could no longer think for themselves. Thanks to the medical profession, and the NIH.

ASPERGERS: A LETTER TO MY CHILD’S TEACHERS …
Please don’t be yet another teacher who refused to have my child in their class. Everyday my child gives up a little bit more on life. My child comes home from school totally exhausted and broken day after day. I am frightened for her future. My child doesn't understand why no one will help her. She doesn't understand why she is left to suffer. My child frequently tells us she wishes she was dead. My child is fighting several invisible battles every moment of every day. These are battles against sensory issues, communication difficulties, processing and memory issues. Please don’t be another battle for her. I am asking you to please fight for her and not against her. A Desperate Mother [of whom there are many]
https://adifferentneurotribe.wordpress.com/2018/12/01/a-letter-to-my-childs-teachers/
+
WHAT GOOD TEACHERS KNOW ABOUT TEACHING KIDS WITH AUTISM - A WISHLIST
+ I know that students who have suffered teasing, bullying, or social alienation often have anxiety--Complex-PTSD, actually. It's a kind of anxiety you get from repeated social injury when you feel there is no escape.
+ My autistic students are tired--of course they are! The majority of them have sleep disorders.
+ There is no place for teachers who yell when you are trying to educate children on the spectrum. I do not raise my voice. Teachers who yell should never be asked to teach autistic children.
+ Being verbal doesn’t mean my ASD students know how to communicate.
+ Teaching autistic children is easy if you know autism, and if you carefully review his psycho-educational assessment and occupational therapy assessments. Unfortunately, most teachers don't really know autism, and don't understand the implications of those professional assessments.
+ Special education teachers are not experts in teaching autistic children.
+ When parents tell me about these meltdown, I don’t suggest they get family counselling, parent classes, nor do I ask about problems at home. I say this: ‘I want to help: what do you think I could do differently to make your child happier here?’
This is a wishlist of teaching practices. I am an Aspie advocate, writer, parent, grandparent and public speaker who works in the autism field. I do parent-trainings, assist with IEPS, and have the great pleasure of working with excellent teachers who understand our children or work to find answers if they're stuck. Only teachers like these should be allowed the privilege of working with our children. The other kind can do harm that can take years to undo. Maxine Share
http://autismgoggles.com/weblog/2015/12/06/Good-Teachers-Know/