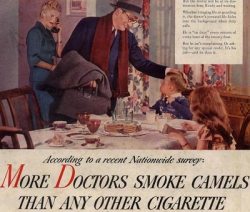 Note:  In the past years, it has become increasingly difficult to find an American news source that does not kowtow to Pharma. More recently, the vicious focus on politics, politicians and parties has made watching or reading the news almost impossible for me, personally. I was once politically active and tuned in. I've all but tuned out today.  Yesterday, I was seeking an update on the upheaval in France and tuned into BBC. American Sunday morning TV was nothing but a nasty tennis match. Here's an interesting report from AlJazeera on the World Health Organization, that points out the Swine Flu scare and vaccine purchases that enriched global pharma companies.  JB Handley's book How to End the Autism Epidemic also delves into using what we now call "tobacco [bought] science" to promote vaccination.

Trust WHO: The Business of Global Health

Investigating the hidden motives behind actions of the World Health Organisation and the real powers that control it.

Headquartered in Geneva, Switzerland, the WHO is now 7,000 employees strong, with six regional offices and 150 country offices around the world, and over 194 member states adhering to the regulations released by the organisation as per the United Nations system.

Whether it's the effects of smoking, the swine flu pandemic or a nuclear disaster, the WHO is the body we rely on to advise on and resolve a public health crisis. But can it be trusted? How does the WHO decide on its recommendations? And how reliable are they?

Trust in the WHO's ability to objectively address global health matters is not as strong as it may have been at its inception. And concerns regarding the organisation's finances and the influences of independent contributors have been circulating since the 1950s when, after years of inaction, the WHO's relationship with key players in the tobacco industry came to light.

"The tobacco industry founded institutes and bought scientists who would represent their position and they made sure their own names didn't appear anywhere," says former secretary of health of Switzerland, Thomas Zeltner. "So the organisations were called things that wouldn't make you suspect they were really representing the tobacco industry."

Scientists and other important figures within these institutes would often have links to both tobacco giants and the WHO, simultaneously. One example was a toxicologist who served as a consultant for the WHO in the prime of the tobacco movement, while on the payroll of an institute funded by multinational tobacco and cigarette manufacturer, Philip Morris.

After the toxicologist's polyamorous relationship was revealed, however, he still remained a consultant to the WHO.

There have since been numerous instances where seemingly unnatural relationships have arisen within institutes with a vested interest in the WHO; most of which appeared to occur at the height of alleged global health threats.

One such connection was between pharmaceutical companies such as Glaxo and Novartis, the countries that had signed agreements to purchase swine flu vaccines produced by the aforementioned companies, and the WHO.

The trigger-point for the agreements was a pandemic alert issued by the WHO in 2009. Read more here.

Aimee as always you are too kind. Thank you.

I know from your posts how much you love your children. You did a lot right. I have no doubts about that whatsoever.

Parenting is hard. All of us made mistakes, based on knowledge we had at the time.

Talc is a rock too. Talc is mined from the earth just like asbestos. Talc is a greenish soapstone made mostly magnesium silicate. I suppose that while mining talc, asbestos might get mined right along with it. Asbestos might just get ground up into a powder along with the Talc.

But all of the findings and studies that involved lab rats breathing it for hours and weeks, to ovarian cancer from 1971 up into the 90s and into 2000s found talc to be in the middle of ovarian cancer cells, and sick rats. They were finding talc. I guess corn starch was much better.
I powered my little girl pretty good as a baby. She was broke out with a yeast infection all the time. Now I have something additional to worry about. I guess I did not do anything right.

J&J knew about the contamination of talc with asbestos back in 1957 ! Covered it up all this time.
The J&J share price took a 10% battering on Friday.
I first heard about here on AoA from a commenter.

The funding\ownership of the WHO needs to be fully investigated and exposed to all.