In A World That's Not Too Far Away... 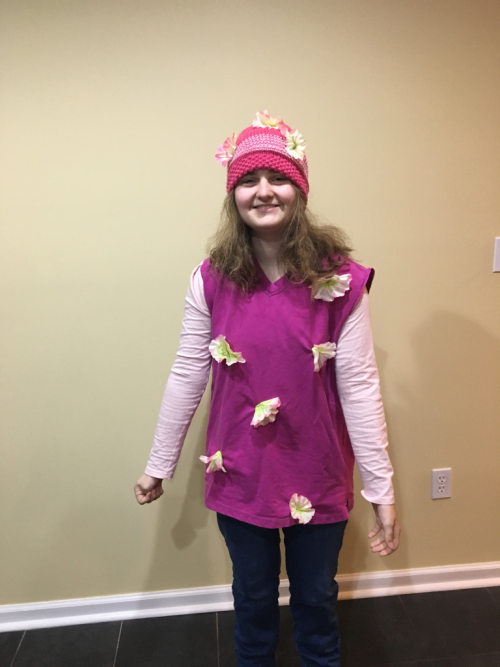 Yesterday, we posted a meme about older "kids" with autism and Halloween. My girls have not dressed up for several years. Mia is now 23, Gianna is 22 and Miss B just turned 18. I am a ripe 50 never-you-mind.   This year, G took it into her mind that she wanted a Team Umizoomi costume from the Nick Jr show by the same name.  On Tuesday night, I had staff here for in-home support hours, and one of the women is an art therapist by degree who runs the day program Gianna and Mia attend. Her name is Mary. In one hour, and with about $10, she zipped to the Dollar Store, bought a few flowers and a cap and with 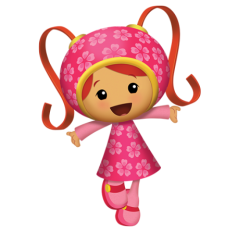 an old shirt of Bellas and literally, the light pink long sleeve T-shirt off my back - (flashback to white Levi's commando moment from my book), she created this amazing costume.  Gianna was so happy and excited! She wore the costume without anxiety all day!

I've learned a few things during this 2 decade autism journey. We must meet our kids where they are - even when it might not be where we wished or had thought they would be. What does any parent want for her 22 year old? Happiness. Pride. Contentment. Gianna had all of those in spades today. Where? Right here at home, in a world not so far away. XOX

Greg, what a sad story that even people like your own family who are used to autism didn't want to go Trick or Treating with T then, as you say, what about the rest of society and people who are not used to what someone with autism is like. However with the ever increasing numbers of people with autism, society is going to have to accept them for who they are-human beings who are just a bit different from everyone else.

Kim: Such a beautiful photo.

Greg: Your story is so sad, but you must have made such a difference to T and his parents.

Where autism is concerned, Halloween for me yesterday was a little frustrating.

Back when my eldest daughter (now 9) was in preschool, in her class was an obvious autistic boy that the teachers were struggling with. It wasn't so much behavioual issues, but learning. The teachers thought he would benefit from playdates, and after scratching their heads they approached me, feeling that I would be the best fit for hanging with T and his parents. Funny, at the time they didn't even know I worked with special needs kids -- actually I should say adults.

I agreed and have had T and his mom many times over to play with my two girls. T's dad is a bus driver who works long hours so it's the mom who is bearing the brunt of looking after him. She is a very nice lady, and also gets along great with my wife.

T would eventually move to special needs school, but we have kept in touch. When T and his mom doesn't come over to our house, I pick them up, and with my two girls we all head to parks, playgrounds, etc. We also go to all of T's bday parties, and even if they're usually scantily attended.

For Halloween this year, I invited T and his mom to come out with us Trick-or-Treating again. I knew my wife wouldn't be entirely crazy about the idea because the previous year she had suggested we might want to keep the 'crowds' separate.

Anyway, this year as we donned our costumes (I usually dress up with my kids) and were getting ready to leave the house to meet up with their friends, I told my girls that T would also join us. My youngest daughter, 6, then immediately bursted into tears. She said she only wanted to Trick-or-Treat with her friends and having T would be be boring. It was the most frustrating situation, and especially with my wife giving me that look.

We did separate, with my wife taking our youngest daughter, and I going with my oldest, and with T and his dad joining us. T's mom also met up with us later. Although my daughter stuck mainly with her two girlfriends as they went door-to -door as the Harry Potter gang, she did make the effort to also include T in their revelling. The other parents also socialized well with T's parents.

All in all we had fun, but later when I got home and started taking off my clown outfit, I couldn't help feeling the part of the sad clown. I wondered, If I of all people on this occasion had to struggle so much to get my own family and circle of friends to make time for T and his family, isn't it truly hopeless that society will ever accept autism.

Gianna looks beautiful in her costume! Wonderful to see her so happy on Halloween!