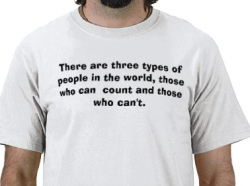 Note: My Lord...  we just keep getting better and better at counting in America. We can find a piece of poop covered romaine in 5 seconds but can't count autism?

How many American children have autism? The U.S. government answers that question at least three different ways and says the latest estimate — 1 in 40 kids — doesn't necessarily mean the numbers are rising.

The new number, published Monday in Pediatrics , is from one of three periodic surveys the government uses to assess autism rates. It's higher than a different survey's estimate published earlier this year, but the surveys use different methods and measure different populations of kids so the results aren't really comparable.

Because there's no medical test, "autism spectrum disorder is a particularly challenging condition to track," government researchers wrote in the Pediatrics report.

Sorry to read about your NF.At the HBOT chamber I operate as an operator we had a Neurofibromatosis patient, who had an operation to remove a small tumour and wished HBOT to promote increase the wound healing- a success healed the wound 3 weeks before it was meant to compared to a non-Neurofibromatosis sufferer.

Just to concur with JT, you carry a great burden with your disease and everyone should respect you for it.

I looked up NF and seems horrific in any form.
I am sorry you are not getting the services you need.
Been thinking of you all day.

Will, I looked it up but could not see, from what I read, why your condition is any worse than my 26 year old grandson who is non verbal, needs 24/7 care and could not possibly participate on this page.

I am genuinely sorry that your life can be a 'living hell'. I simply don't understand why you are always so angry with the people who comment on AoA. Most of their lives have been affected too.

If you feel we do not care, I am sorry.

Do any of you people have the courage to look up Neurofibromatosis like i asked. Supposedly "autism" is more common in my genetic disease than those without NF. Go and look it up and educate yourself then respond to my comment. Tel me your thoughts afterwards and see why unlike people like John Robinson and Ari Ne'eman our NF lives can be a living hell!

Will
From the get go, under diagnosed.A couple below..

Thousands of autistic girls and women 'going undiagnosed' due to gender bias
https://www.theguardian.com/society/2018/sep/14/thousands-of-autistic-girls-and-women-going-undiagnosed-due-to-gender-bias

I don’t know about California but have generally found government resistant rather than otherwise to recognising cases because it costs so much money. Why wouldn’t autism continue to rise with all the additional environmental hazards like the expanding vaccine schedule, WiFi etc?

Could autism be over diagnosed?! Just because your child has a speech delay and social skills problem does not mean autism! speech impediments impact about 2-5% of people and there are many factors that could cause social skill problems. I am a person with legitimate autism and the genetic disorder Neurofibromatosis ( please look it up and see how serious it could get) and I am getting pissed off about over diagnosis flooding the California regional centers and impacting their ability to offer services.

The oh! be joyful, lets celebrate autism, must be thinking the world is so right Christmas really has come early.1-40.

Last night on the local (TV) news there was a report about Local Authorities not being able to cope with Special Needs children in schools. They also mentioned the extremely long time it takes for a diagnosis. Also mentioned was that the government is allocating extra cash for special needs.

This morning on local radio there was a report about police having to respond to people with 'mental health' problems because the Health Service are stretched to the limit and do not have enough 'mental health' facilities/staff. Again, more cash promised by government.

These reports will only escalate until someone in power makes the decision to 'come clean' and admit what has been going on for the last 3 decades.

I'm not holding my breath

The A_rate recorded in the UK in several parts is now 10% (eg. South London).
The true US figure would likely be much higher than this given the 70 vax per child cdc requirement.

This is a CULL.

This is beyond pathetic, hopeless.... sad! Wow! -- 1 in 40 children permanently disabled and no one really cares?!

"Various reports in recent years have suggested autism rates are rising slightly. Experts think that's mostly because of earlier diagnosis, an expanded definition and more awareness, but say they can't rule out a true increase caused by unknown factors."

Like everything else used to deny the autism epidemic .. this comment more or less is the perfect example of the commonly used statements of DENIAL .. that public health bureaucracies .. who have the data, resources and expertise to ACCURATELY monitor the EXPLODING rate of autism in this country .. always end with the same .. SHAMEFUL ADMISSION .. they "can't rule out a true increase caused by unknown factors".

These despicable bureaucrats have witnessed autism rise .. not over RECENT YEARS .. OVER DECADES .. and measured by that common sense statistic … rising from 1 in 10,000 to 1 in 40 is not a SLIGHT RISE IN AUTISM. IT IS CATASTROPHIC .. and .. they can at any time actually RULE OUT THE SINGLE SUSPECT UNKNOWN FACTOR .. ADDING NUMEROUS RECOMMENDED AND APPROVED VACCINES TO CHILDREN IN THE UNITED STATES .. WHICH HAS ACCOMPANIED THE INEXPLICABLE INCREASE IN ALL CHILDHOOD CHROIC AUTOIMMUNE DISORDERS .. INCLUDING AUTISM.

For almost 40 YEARS .. public health bureaucracies have REFUSED any scientific effort to isolate and identify VACCINES as the most significant UNKNOWN FACTOR RESPONSIBLE FOR THE INCREASE IN AUTISM.