Autism on the Sidelines

Until another person walks in our shoes, they may never truly grasp how challenging life can be for those with autism and vaccine injury as well as for those who care for them.  That said, I think it’s important to share our stories whenever and wherever we can.  Not that we have to prove to anyone that our sacrifices are real.  Those sacrifices are as real as the vaccine injury that changed life as we knew it.

That thought has run through my head several times over the last few months.  Since late August and up until last week, 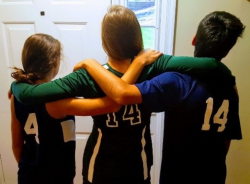 Ronan's siblings were participating in team sports.  Multiple times a week, I was dropping off or picking kids up from late afternoon practices and evening games.  Some days, friends blessed me and took over carpool duties.  As much as I could, when three kids were in three different directions at three different sport venues, I still tried to get to their games.  With Ronan and my youngest in tow, getting to everyone wasn't easy.  Just getting out of the house took effort on Ronan's part.

When he was successful in getting himself to the car without incident, any time I buckled Ronan in, I hoped and prayed that he'd be accommodating to what was next on the schedule.  After traveling, he’d be tasked with sitting for at least one hour on the sidelines while I cheered loudly for whomever was on the court or the field that day.  When we could, we’d even try to get to two events which meant twice as much sitting and twice as much cheering.  Sitting and listening to me cheer for his siblings is not Ronan’s favorite thing to do.  Regardless, I prayed that he would be patient and engaged in the items I'd brought for him so that we could stay until the final whistle blew.  Happily, Ronan did a great job no matter on which stands, home or away, we sat.

As we left the final event for my oldest daughter recently, one of the staff at the high school recognized and greeted me.  I'd met this woman last school year after an unfortunate parking lot incident.  Not one to complain unnecessarily, I'd kept quiet about what I’d seen previously in the parking lots.  But this time, when another driver's attitude was just so rude, I knew I had to speak up.  Even though we were only a few weeks into the school year, I'd seen one too many cars parking or blocking the handicapped parking spots on school grounds.  Besides the fact that it's illegal to take these spots unless you've got a handicap placard, it was royally screwing up Ronan's chance for success.  Once he gets in the car, we pray earnestly that he'll want to get out of the car when we reach our destination.  This rude driver didn't care about Ronan, or the fact that they were breaking the law, and offered some unkind words in my direction after I’d asked them to move and park in one of the many open regular spots just a few feet away.

It doesn’t matter what your title is, how rich or poor you are, or where you grew up.  What matters is if you have compassion toward others, especially toward those who struggle.

When things cooled down and I could get Ronan safely out of the car, I snapped a photo of the license plate and sent a message to the school administration.  Minutes later, luck was on my side as I entered the gym.  The nice gal who recognized me this year was the same gal who was in charge of school security, which included each of the parking lots.  Smiling, despite how frustrated I was, I made eye contact with her.  Smiling back at me, she asked me how I was doing.  Poor woman, I unloaded on her.  Ronan was agitated.  I was doing my best to redirect him.  We’d missed half of the first game, and it looked like Ronan was not going to want to sit through the rest of them.  Even though the other driver had finally moved from the handicapped spot, I knew that if the right staff didn't know about how many frequent offenders there were right outside their doors, the problem would persist.  So I told her everything, including why we needed access to the parking spots that Ronan had every right to use.  Assuring me she’d do what she could to address the parking situation for families like mine, she encouraged me to continue to speak up if I saw any others misusing parking spots.  I promised her that I absolutely would.

Fast forward to the end of this year’s fall season of sports.  Over the course of two month, Ronan sat through dozens of games.  Only once did he make a request to leave early!  And only once did I have to ask another parent to park in regular spot compared to multiple times years before.  I was thrilled not just for him but for me as well.  The security lady was, too.  She knew how much I loved to be at Fiona’s games.  More than that, she knew how difficult it was for Ronan to just walk in the door some days.  In the past, he’d take one step over the threshold and would go no further.  Years before that, he wouldn’t even make it to the door.  We’d sit in the car in the parking lot counting down the minutes until a game was over.  This lady recognized that Ronan didn’t just walk into the building; he made it through an entire season through to the playoffs while sitting happily next to me in the bleachers!

Beaming as I recounted how many games and hours my son could now manage compared to when I first met her, it was now her turn to smile.  Excitedly, I told her, “…and some of Fiona’s games went beyond the typical 3 sets.  Many times they went to five games, and Ronan did great each time!”  Her smile told me just how pleased she was to hear that news.  Cheering me on and all that I was able to do to get Ronan into that good routine, she wished me well.  Turning to go, we wrapped up our conversation – she with a gracious smile and I with one full of thanks.  As quickly as that happy high settled over me, Ronan had a seizure.  Then he had another one.  Ushering him quickly out the door, we drove home in silence.

Be kind to everyone you meet.  You never know what they are going through.

Sports season ended last week for my crew.  It was as much of an accomplishment for Ronan to get through the season as it was for his siblings to get through theirs.  I couldn’t be at all of their games, but they knew it wasn’t because I didn’t want to go.  Keeping tabs on who scored, who made an excellent play, and who needed my immediate attention when they came home, I had friends feeding me play-by-play accounts of practice, games, and tournaments when my absence was felt.  Those days, I’d get the following:

Making sure to catch me up as soon as they returned home…“Mom!  Did Mrs. So and So tell you I got a point?!  It was so awesome!  I know you couldn’t, but I wish you could’ve been there to see it.”

Making sure that I didn’t need to worry any more than I already do…“Mom, I got hurt while playing, but Mr. So and So said I’d be okay.  He was right, it doesn’t hurt now.”

Making sure to tell me that they know that other things come first…“Mom, I’m sorry you couldn’t be there.  I know you had to take care of Ronan.”

Not being able to be there for my children made my heart break some days.  But my heart would burst with pride for my children other days.  They learned a sport.  They worked through aches and pains.  They perfected their skills.  They became team players, and they made progress while on that team.  They may have rolled their eyes with how loudly I’d sometimes cheer, but I know that they were very grateful for each minute I could be there for them.

I’m glad for the break we’ll have now that the fall season has ended.  We’ll rest, catch up on some projects we’ve left unfinished, and enjoy long winter afternoons and evening here at home instead of at a gym or a field.  We all need that time to recover from how busy and active we’ve all been, Ronan included.  In a few months, we’ll look forward to spring sports and to giving Ronan the chance to sit on the sidelines with his mama once more.

Thanks Cathy, always nice for something different on Sundays, prayers for you and yours as we enter the Christmas Season.