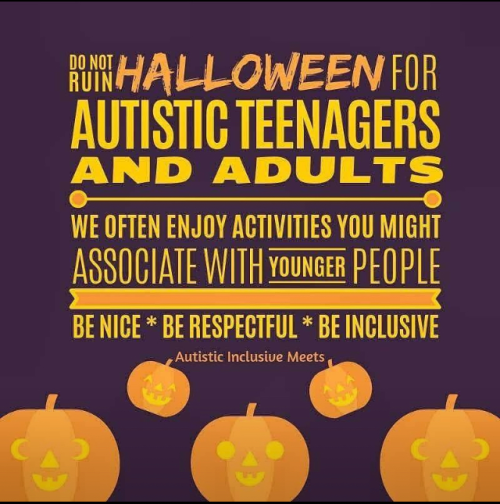 Colleen was busy on the 31st (Halloween) so got it moved to the 30th (the witch).
Does anyone know what happened ?

Friends of NCBDDD Fall Webinar -----(YOU HAVE NO FRIENDS)

Agenda items for the webinar include:
•Director Coleen Boyle will brief us on Center activities and answer questions from partners.
•Authors of a recent report in the Morbidity and Mortality Weekly Report (MMWR) will discuss their findings that 1 in 4 adults has a disability.
•Members of the Friends of NCBDDD Executive Committee will recap recent activities and outline future opportunities for engagement.

The friend who ate the bone from my pan de muerto many years ago sent me this this morning, on how to make the altar for the Días de los Muertos (plural, an evening and a day dedicated to each of a number of groups).

Beautiful and meaningful to put together even when everyone has outgrown Trick or Treat. I really don't think there's much left of its marginally Aztec heritage: it's a universal Catholic holiday. Our church asks people to bring photos of their departed loved ones to leave on tables in the gathering space all month long.

I've been worried about this for many years. When my autistic daughter was little, she really didn't get Trick or Treat. I took her out every year in beautiful costumes, but she didn't enjoy it much and couldn't go through the routine of ring the bell, say Trick or Treat loudly as soon as the door opened, hold her bag open or pick a candy offered, say Thank you! immediately, then optionally Happy Halloween! and turn away, not having touched or picked up anything in front of the house. Thank you if they complemented her on her costume.

My mother made me stop trick or treating when I was nearly twelve, which hurt my feelings: I still enjoyed it. And since C. didn't get her money's worth out of childhood, I've continued to take her out every year. Fortunately, 'she's short, so she doesn't look age-inappropriate. And now she's got the routine down pat. And she enjoys it. I made a Frozen costume three years ago out of decorated paper I had the computer printer make innumerable copies of, taped together with transparent mailing tape following a pattern and then completely covered with tape to make it somewhat water-proof and sort of glimmering: skirt, bodice, cape, and crown, people couldn't get over how beautiful it was, all made of paper. Lots of compliments, people couldn't get over that it was made of typing paper. An Alvin costume with a long red t-shirt with a yellow felt A sewed onto it, a red baseball cap with another yellow felt A, and a long stuffed chipmunk tail made of felt and sewed to the back of the t-shirt. Children shouted Hey, look, it's Alvin! and Hi, Alvin!, to which C. didn't respond.

But I've told her for years that I wasn't going to take her trick or treating once she graduated from high school next May. She's 18, I'm tired, and there's just no end. So tonight is our last trick or treating. She'd also enjoy sitting at the door and giving out candy, which I do not.

So tonight it's Incantasia the witch (2013 and 2014) one more time, and then that's it. She carved a beautiful jack o' lantern on Saturday with friends in California, something else that I have no desire to do ever again. I'm making gluten-free pan de muerto now for our altar, and it's in the warm oven now rising again before baking. Maybe it's a bad idea for her to eat a yeast egg bread, even gluten-free, but we're going to do it anyway. I just threw in anise extract and anise seeds, orange extract and grated organic orange peel, regretting that I no longer had my bottle of flor de azahar, I learned that those were traditional ingredients from a recipe in Kena Moreno magazine when I lived in Mexico City, and now I realize that they're from the days when Spain was Muslim. I told C that in Mexico City many years ago I made pan de muerto with the friends we visited in June: I made the traditional bones out of bread dough to put on top, and one of my friends broke one off and ate it. I told C that I got mad and he got a Sabueso bone-shaped dog biscuit and put it on top of the bread to replace it. C. laughed and said Can we do that? She helped me make tissue paper marigolds (xempaxúchitl, the flower of the dead since Aztec times) yesterday, I put out photos of my parents, candles, glasses of water, decorated sugar skulls made of plastic, and seven sheets of papel picado on the wall with designs of skeletal Catrina dancing with a male skeleton dressed in 1900 style, crosses, skulls, etc. We'll put the pan de muerto in the middle after it's baked. Candy bars for my father. After I clean the floor I'll put a cross made of salt on the floor below it, to keep evil spirits away. And I know that the souls of my parents will visit us tonight or tomorrow night. The Halloween of 2004 it rained the entire time we were out with C in a woodland fairy costume. When we got back we went to bed. I had left the flashlight we had used trick or treating on top of the dresser, having turned it off. An hour later I was still awake and saw when it turned itself on again, across the room from me. And I knew it was my father.