Home Donate Contact Us Special Reports Science Subscribe by Email Subscribe to RSS Our Mission
Communication is Life Changing: A Response to The Facilitator's Touch
Blaxill Presents 1 in 36 A Tsunami of Autistic Disabled Adults That Will Overwhelm Our Nation at Utah Health Symposium 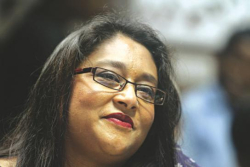 Note: No one has done more to ring the bell of alarm over the autism epidemic worldwide than our own Anne Dachel. Here, she reports on a similar disconnect between the difficult reality of autism's never ending climb and what seems to be a hallucinatory denial of the severity.   There is no known cause, just coincidence.  Dr. Wazed Hossain knows in her very heart of hearts (insert gag) that it is NOT vaccines - that theory has never been replicated (wrong) and has been "debunked."  When  you read the word debunked you must ALWAYS put on your bull&hit goggles. It's a playbook code word. No matter the topic. Debunked means, dismissed.

An article published on Oct 23, 2018 by a news source in Sri Lanka shows just how paralyzed experts are when it comes to addressing autism.

The piece, Autism may reach epidemic proportions in Lanka, warns WHO expert Dr. Saima Wazed Hossain,   contains a maze of remarks that will only leave the reader mystified.

Hossain, "an expert on neuro-developmental disorders," is actually very clever at double speak. Take your pick of her views from this interview:

She sounds worried about the rising rate.

"Autism has reached alarming numbers worldwide, and that it may reach epidemic proportions in Sri Lanka."

"It is an increasing number all over the world."

And in the same breath she chalks it up to better diagnosing, no real increase.

"It is believed, awareness and better diagnostic mechanisms are exposing more and more numbers that would not have come to light otherwise."

She tells us to be patient when it comes to finding the cause of autism.

"No specific cause has been established for the rise. It takes time to know if there is a connection to our changing lifestyle, if something related is causing this genetic mutation to effect."

Again she focuses on an increase.

"The increase is universal, it is not distinctive to any specific country. We see an increase in Autism cases worldwide."

So is there really an increase in the number of affected people? Then shouldn't we be looking at shared environmental exposures?

AUTISM ISN'T BE LINKED TO VACCINES, or maybe it is.

She denies a link to vaccinations:

"In one study it was said there was a link to childhood vaccinations and Autism, but now it has been debunked."

But she hints at possibly falsified study results with links to "a third party."

"When research is conducted, sponsors play a key role. It is almost like saying find this result for me, hence it is difficult to know if the results are accurate until another independent research, without a third party sponsoring, is carried out to confirm the outcome of the former study."

She talks about the coincidence of autism symptoms showing up at the same time as the MMR vaccine being given.

"It should be based on the health of the child, the vaccinations are put together so that there are fewer shots and are less costly, and perhaps it can be divided and given not at too young an age."

So is she criticizing the current one-size-fits-every-child-no-exceptions schedule? Could there be a connection with the rise in autism?

No matter how much speculation is going on, AT THE END Hossain gives us her complete endorsement of the safety of vaccines: "The WHO approved vaccinations do not cause Autism in children. It has actually been proven."

(What else would you expect “WHO’s regional champion for autism in South Asia” to say? Of course “The WHO approved vaccinations do not cause autism.”)

IN TRUTH, Hossain is just one more official scratching her head while overseeing the destruction of healthy children worldwide. She has no answers about autism, but she is concerned about the rate.

Clueless as Dr. Saima WazedHossain is, she has to recognize that there is no comparable population of AUTISTIC ADULTS out there. That simple reality is universally ignored, but it will bury us in the end.

Indeed, why are the Colleges of Physicians and Surgeons not speaking out as the statistics show grimmer and grimmer outcomes for our children? Oh wait, I know, because THEY ARE PART OF THE PROBLEM!!!!!
Surely some of them feel this pressure?

Just like Saima is a criminal, so is the FDA ! And they just don't give a fook (as long as it isn't their children). This is a holocaust the magnitude of which the world has never seen before.
Nazis rule the western world and the resistance (although small) is obligated to stop them.

The use of tumorigenic and tumor-derived cells is a major safety concern due to the potential presence of viruses such as retroviruses and oncogenic DNA viruses that could be associated with tumorigencity, Therefore, detection of persistent, latent DNA viruses, and endogenous retroviruses in vaccine cell substrates is important for vaccine safety, particularly in the development of live viral vaccines, where there are no or minimal virus inactivation and removal steps during vaccine manufacturing.

Chemical induction is a rigorous method for evaluating the presence of endogenous retroviruses as well as some latent DNA viruses that have the potential to become active and produce infectious virus. This approach has been extensively used for mouse cells. We have optimized virus induction conditions in mouse cells using a standardized, highly sensitive, single-tube fluorescent PCR enhanced reverse transcriptase (STF-PERT) assay. We have further determined optimum conditions for activating latent DNA virus from a human cell line. We have extended the assay to develop a stepwise approach to induce and detect endogenous retroviruses and latent DNA viruses during evaluation of cell substrates for vaccine safety.

The chemical induction algorithm developed using these positive control cell lines can be used to evaluate the safety of novel vaccine cell substrates for new vaccines. We are now investigating emerging technologies for broad virus detection to identify novel, induced and other unknown viruses. Additionally, we are investigating potential biomarkers for virus induction

In vitro and in vivo investigations to address retrovirus concerns in biologics. Simian foamy viruses (SFVs) are highly prevalent in all nonhuman primates (NHPs) and can infect humans by cross-species transmission. Although there is no evidence yet of disease with SFV, infectious virus persists in the host DNA. Therefore, we are trying to understand SFV latency and activation and factors involved in virus transmission, which will be important for managing SFV infections in humans.

We are also investigating potential interactions of SFV and SIV in the monkey model to predict the outcome of SFV and HIV-1 dual-infections in human cases, reported in Africa. Furthermore, our blood transfusion studies in monkeys regarding the risk of SFV transmission from infected blood donors to recipients will contribute to blood donation policy-making decisions.

A top drawer denialist and as Ann points out double speak, personified.

If one in 36 kids have autism now and its due to better diagnosis as she claims something is very, very wrong.

Yes, the defensive false assertions of vaccine injury perpetuators sound like one part kiss-off, and one-part loyalty pledge… but their calculated semantics actually amount to “I can’t handle the truth.”

Here are eight self-serving clichés from the vaccine/autism denialist playbook that I’ve put into two sentences:
“Vaccines have saved countless lives; the link to autism was discredited by evidence-based, robust surveillance. Desperate parents are true believers whose Dunning-Kruger effect leads to confirmation bias.”

A critical thinker will realize this summary is merely opinion devoid of facts. Unfortunately many of today’s readers may lack the ability to make that distinction, instead hastily seeking the next new thing.

Anne, thank you for this interesting article. Thank you, also, for all your hard work keeping up to date with the increase of 'mental health' problems in schools in U.S, Europe etc.

I want to echo and agree with the comment from Bob Moffit, above. Thanks also to the GREAT Anne Dachel for this piece. And for reminding us about "double speak". There's an EXCELLENT book on "DOUBLESPEAK", by a writer named Lutz. (Sorry I don't recall the details, but that's enough to find it on Amazon or Youtube.) "Double-speak", which is the actual words, and "sophistry", the ideas *behind* the words, are both excellent topics to keep in mind, and study. Have a good weekend, and,
KEEP UP the GOOD WORK, people!

Anyone who assumes the role as "spokesperson" as an "expert on vaccines" for the WHO must have a doctorate degree in the skilled art of "sophistry" .. which Webster's defines as: "misleading but clever reasoning". Hence the carefully chosen "reasoning" meant to explain the worldwide epidemic of autism .. " "It is believed, awareness and better diagnostic mechanisms are exposing more and more numbers that would not have come to light otherwise."

We are living in dangerous times .. where "sophistry" has replaced "science" .. the accomplished "sophist" replacing the accomplished "scientist" .. as evidenced by the sophist's comment: "In one study it was said there was a link to childhood vaccinations and Autism, but now it has been debunked."

The far too common use of euphemisms … defined by Webster's as: "the use of a less direct word or phrase for one considered offensive" has led to historical tragedies. In a documentary about a highly secret meeting of Hitler's top military, medical, transportation government officials gathered to discuss the FINAL SOLUTION .. the single word "evacuation" was substituted for the correct word "extermination" .. making all around the table more comfortable discussing what was planned ahead for the Jewish population throughout Germany held territories.

Those gathered around that infamous table discussing the FINAL SOLUTION ought to be a fair warning that "sophistry" and the use of "euphemisms" by our WHO public health bureaucrats is as dangerous to the world's population as are all the nuclear weapons in storage.

"Clueless as Dr. Saima WazedHossain is"

But Anne , you arent calling this WOMAN out for what she is ! Are you ?

She is a liar and a criminal. A willing facilitator in the maiming and killing of children.
Clueless just doesnt cover it.