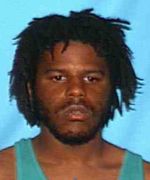 KTLA reports: LOS ANGELES -- Police are asking for help in finding a 23-year-old man affected with autism and missing for almost a week.

Novarro Showers walked away from his home in the 200 block of North Lake Street, between Beverly Boulevard and Temple Street in the Westlake district, around 3:30 p.m. Wednesday.

Detectives say Showers has the mental capacity of a 12-year-old and his verbal skills are limited.

Showers has shoulder-length dreadlocks, is 5 feet 5 inches tall and weighs 145 pounds. He was wearing a white T-shirt, blue boxer shorts and black and gold slippers.
Anyone with information about Showers' whereabouts was asked to call missing persons detectives at (213) 996-1800.

I pray that God protects this man from harm because he is not able to recognize danger or to be able to protect himself from predators.

Posted to FB also. I hope they find this boy/man. He looks like how my Riley looks, no one knows he has autism until they speak to him or see him stim. My son looks like an NT kid.
Thoughts and prayers go out to his family.