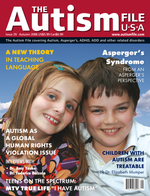 The Autism File: International Autism Magazine Now Available in Bookstores in US & Canada

A North American edition of The Autism File, the longest running international autism magazine, has been released for distribution to 2000 bookstores in the United States and Canada. The Autism File, published in the UK for over 10 years, is also available in Spain (in Spanish) and Australia. The Autism File’s Scientific and Editorial Advisory Boards are made up of leading autism experts and advocates from around the world.

Bookstores that are stocking  The Autism File in the US include many Barnes & Noble, Borders, Books a Million, Universal News in New York and bookstores at four major airports: JFK, Newark, Chicago and San Francisco. Distribution varies by region. In Canada, stores carrying the Autism File will include Chapters, Coles, Indigo, and Presse Commerce and will be on the shelves for a three month period with an initial two week promotion.

Here is what readers are saying:

“I just received a copy of The Autism File U.S.A….  I must say Wow! Wow! and Wow!" commented Jonathan Alderson, EdM, an autism treatment specialist. “The magazine is just packed full of top quality articles and great information from well-known researchers and practitioners in the field.”

“What impresses me so much is the content. Simple, clean, impactful. It’s a tough one to put down once it’s opened,” wrote Lori Mcllwain, co-founder and Vice-Chairperson of the Board of the National Autism Association.

Teri Arranga, Director of Autism One, is The Autism File’s Editor for the US and Canada.  Teri works closely with Polly Tommey, Editor-in-Chief, who founded the The Autism File with her husband, nutritionist Jon Tommey, over ten years ago.  “The journal covers the many diverse aspects of autism from childhood through adulthood, including biomedical issues, educational interventions and therapies, advocacy and practical advice for daily life, in order to help children and families touched by autism worldwide,”  Polly explained.

The Autism File debuts in the US and Canada with articles from autism experts such as Dr. Stephen Edelson,  Dr. Elizabeth Mumper, and Dr. Harry Schneider.  A panel of scientific experts including  Dr. Kenneth Bock, Dr. Dan Rossignol and Dr. Amy Yasko will reply to questions in their column “The Doctor is IN,” (Askthedoctor@autismfile.com).  Practical advice is offered by award-winning author Chantal Sicile-Kira in the “Ask Chantal” column. Articles by people on the spectrum, such as Dr. Stephen Shore and Dean Beadle, are featured in every issue.

For more information or to subscribe, please visit www.autismfile.com/ .

Cool! Thanks for the info Kim.