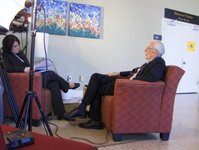 Most of the time, in the countless articles and news videos I look at, the controversy over vaccines and autism is presented as a debate with scientists and doctors on one side and parents along with the general population on the other side.  We rarely hear about the experts who challenge the claims of health officials.  This is a point of increasing frustration for me and countless others in the autism community.

This isn't just an argument about proving vaccines have serious side effects.  It's really about who will be held responsible if it's clearly shown that through complete oversight failure, a generation of children has been damaged by unsafe vaccines.   That's it -- pure and simple.  But we don't talk about that.  We pretend that autism is a puzzle we just haven't been able to solve and that officials have earnestly looked for a link with vaccines, but they keep coming up empty.

Late last week, I received word from Linda Weinmaster of No Mercury that Dr. Frank Engley had died.  Dr. Engley has an extremely important place in the story of the autism epidemic and he'll be long-remembered for what he did to expose the truth.

Reporter Ashley Reynolds interviewed Dr. Engley as part of her incredible landmark series, Combating Autism from Within, on KOMU-TV in Columbia, MO in 2007.  His comments deserve to be acknowledged now.

You can listen to him explain how officials ignored the recommendation to remove the mercury-based preservative thimerosal from medical products, especially children's vaccines, back in the 1980s and about the fear that motives them now.

A while ago I learned the term "iatrogenic"  and simply put, it's an adjective that means "caused by doctor."  It's used to describe a symptom or illness brought on unintentionally by something that a doctor does or says.  I'm sure it's a word that sends shockwaves through the medical community.  Dr. Engley's comments make it clear that autism is an iatrogenic epidemic.

Dr. Engley was a researcher and microbiologist who served on boards with the Centers for Disease Control, the FDA, and EPA throughout the 1970s and 80s.  He researched the toxicity of thimerosal.  He understood that there's no such thing as "safe mercury" and he knew of the potential for harm from continued mercury use.

"I am afraid they [the FDA] have a tremendous amount of pressure being brought to bear by the medical profession, by the pediatricians, by Congress, and by industry, and so they are under pressure and someday they will have to live with the fact with what they said is wrong," said Dr. Engley.  He noted that the FDA knew about the dangers of thimerosal back at the time when he served on its board.

"I would say to you, the FDA is partly to blame for the mecuricals still being on the market all that length of time. If they would have followed through with our 1982 report, vaccines would have been freed of thimerosal and all this autism as they tell me would not have occurred. But as it is, it all occurred," said Dr. Engley.

The date of 1982 has a chilling effect on me as a parent and I'm sure others share my thought: "If they had listened in 1982, my child wouldn't have autism."  They were warned by a top scientist and one of their own board members and they did nothing.  They allowed the drug industry to continue to expose our children to more and more deadly mercury and they pretended it was safe.

Dr. Engley addressed the role of the CDC in this disaster.  He said that they were in on the production and development of some of these vaccines and that they have everything at stake in covering it up.  He explained that "the CDC cannot afford to admit thimerosal is toxic because they have been promoting it for several years. Today they are in the process of getting vaccines all over the world to immunize 100 million children with vaccines, many of which contain thimerosal."

The Combating Autism from Within series will ensure that Dr. Engley's efforts have a lasting effect.  They expose the lie that officials had no warning of the potential for harm because of mercury exposure.  In one place I found this quote from Dr. Engley, "These people are being forced to say something sometimes they really don't believe. But they are having to say it.  I am not sure I can live long enough to see a lot of that taken away from them. I can only hope."

Dr. Engley may not have seen the truth officially recognized in his lifetime, but it's coming.  There are too many voices out there all saying the same thing.  There is an epidemic number of disabled children who can't be explained away.  The tired old claims from the CDC and medical organizations are falling on deaf ears.  The public is going to be left with a welfare disaster when it comes time to support a generation of adults with autism who aren't there now.  They will demand to know the truth about what happened and Dr. Engley gave us that truth.

And Dr. Engley is included throughout the hour long special HERE.

Anne Dachel is media editor of Age of Autism.

Frank was my uncle. I had no idea he had died, nor that he was so instrumental in the fight against autism. Does anyone have any other information on interviews (written or video) with Frank?

I thought I overheard one of the mom's at Autism One talking to another mom about the presentation they just energed from (I think it was Dr Engley - I didn't see it myself) - she was almost shaking, tears in her eyes - "...how could they let this happen - for 50 years those bastards knew..."

Thanks Anne and Tim for the story and link to the video. I had not known about Dr. Engley -- it sounds like he may have been the first whistleblower. I don't think he'll be the last.

Thanks Anne for a wonderful farewell to a great great man.

Eric Gladen of the The World Mercury Project has this recent interview of Dr. Engley as well:

"On May 24th we interviewed Dr. Frank Engley, who many claim to be the pioneer that determined thimerosal is not effective as the preservative it was invented for, and that thimerosal is extremely toxic at nanomolar(parts per billion) exposures. His credentials would take up this entire blog, as he has degrees from three major universities, and has been in the field of Microbiology for over seventy years. He has been a consultant to many government agencies such as the FDA, CDC, CIA, and NASA. Dr. Engley started researching the toxicity of thimerosal in the 40's, and published several studies starting in 1948 that some say should have been enough proof to stop using thimerosal around 60 years ago. We were very fascinated by what Dr. Engley had to say, and we can only imagine what would be different about this world if only the right people had listened to him back then. Attached is a video highlighting some of what he had to say."