GARDASIL IN THE NEWS: HEADED FOR THE OBITS? 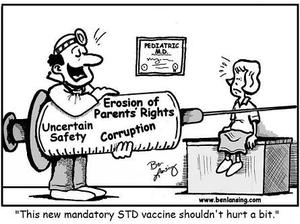 Managing Editor's Note: Gardasil has been in the news frequently lately. Thank you to artist Ben Lansing for this cartoon. You can visit his site at www.benlansing.com.

From CBS News this morning:  HPV Vaccine Linked To Teen's Paralysis? Her Father Thinks Gardasil Might Be; Drug's Maker Denies It

From Market Watch: BOSTON (MarketWatch) -- Merck & Co. shares fell sharply Monday amid concerns raised in a research note by UBS about how sales of its new vaccine Gardasil are faring.

More from the AAP:Since Gardasil prevents HPV, a sexually transmitted disease, it is important that it be given before people become sexually active. In fact, the the Centers for Disease Control and Prevention (CDC), the Advisory Committee on Immunization Practices (ACIP), and American Academy of Pediatrics (AAP) all recommend that Gardasil be routinely given to girls when they are 11 or 12 years of age.

Those of you who regularly read this column know that Judicial Watch has taken the lead in exposing the ugly truth about the dangerous side effects associated with Gardasil, the vaccination for human papillomavirus (HPV) currently being administered to young girls.

Well this week, we released a special report (HERE) based on new "adverse event reports" and other information obtained from the FDA under the Freedom of Information Act. These reports document 10 reported deaths (HERE) since September, 2007. (The total number of death reports is at least 18 and as many as 20.) The FDA also produced 140 "serious" reports (HERE) (27 of which were categorized as "life threatening"), 10 spontaneous abortions and six cases of Guillain-Barre Syndrome (HERE) - all since January 2008.

Here are a few excerpts from the documents we uncovered. The rest can be read in our report. (Warning: These descriptions get very graphic.)

• Information has been received...concerning a 20 year old female with no medical history reported, who on 01-APR-2008 was vaccinated with a dose of Gardasil....The patient died four days after...patient sought unspecified medical attention. An autopsy was performed which ruled out suicide and anything suspicious. The cause of death is currently unknown. VAERS ID: 310262-1 (D)

• Information has been received from a physician concerning a female patient who on an unknown date was vaccinated with a dose of Gardasil. Subsequently, the patient experienced a coma and is now paralyzed. At the time of this report, the patient's outcome was unknown. VAERS ID: 303188-1

Would you allow your daughter to have this vaccine when these are the potential consequences? I know I wouldn't. If Merck has its way, however, we might not have much of a choice. Merck had been lobbying to have the vaccine mandated for young girls and some politicians seemed willing to oblige. The Centers for Disease Control and Prevention has already recommended that 11 and 12-year-old girls begin receiving the vaccine as part of school vaccination efforts. (Following the CDC's lead, Texas Governor Rick Perry signed an executive order last year mandating the vaccine for 6th grade girls. Parent groups fought the mandate and the mandate was rescinded.)

These developments make our report all the more relevant. Read it for free by clicking  (HERE), and then be sure to send the link to your friends, family members and colleagues.

Judicial Watch is a non-partisan, educational foundation organized under Section 501(c)(3) of the Internal Revenue code. Judicial Watch is dedicated to fighting government and judicial corruption and promoting a return to ethics and morality in our nation's public life.

IMPORTANT NUMBERS - please keep in mind crucial stats when discussing the Gardisil "choice". Approx. 10,000 cases of HPV cerv. cancer with 3,000 deaths out of 151 million U.S. females represents a miniscule 7/1000ths of 1% population with a 3/1000ths of 1% mortality. If Gardisil prevented EVERY case - it wouldn't improve women's health in our country even 1%. So what is Gardisil about except $1.5 billion for Merck peddling a product 99.993% of us WILL NEVER NEED.

couldn't access the AAP template, but can just imagine- something along the lines of the flu shot "shortages"- make them line up, pretend to withold it to make it more desirable....ooooohhh, there is not enough for everyone...run and get yours right away!

I can't help wondering how many deaths and serious reactions it will take for this vaccine to be pulled from the market. Is there ANY number that will cause the FDA to get off their butts and correct their mistake? Or will it take some prepubescent teenage celebrity having a reaction for this stuff to make news?

"Merck's future has also been clouded by slowed sales of its cholesterol drugs Vytorin and Zetia ..."

What a surprising coincidence that today's news, in addition to the Gardasil fiasco, included news of potentially placing children as young as eight on statin drugs to sontrol cholesterol. KACHING KACHINg!!!

Don't forget the CNN article, too ...