My son Benjamin Brown is an almost 6 year old boy diagnosed with severe Autism at 20 months of age.  I wanted to share a little of his recovery story.  The healing process has been long, the behaviors almost impossible to deal with at times, the educational needs immense.  For a long time he did the two steps forward, one step back dance all the time.  Change is in the wind now, after almost a full year on oral DMPS changes are happening constantly.

I wanted to share some good news because Ben has made a huge leap forward this year with his overall development and language skills. The real reason I am posting today is because he is finally toilet trained. His recovery in the past had been slow, progress sometimes seems like it arrived at snails pace however when something as wonderful like using the toilet happens just needed to share it.

(That's Ben at age 2.) Toilet training has been an ongoing total failure and I was really just beginning to accept he might never be trained when suddenly about one month ago he decided on his own he was going to do pee in the potty. BM's came a few days later and took some convincing and many hours of me sitting on the floor in the bathroom for 3 days in a row - eventually he pooped in the toilet once and then he seemed to get it and only had a couple of accidents. Its now been almost 3 weeks of constantly using the toilet on his own without any reminders and I am so happy I tear up thinking about how great it is for him. I really did not think potty training would happen without some sort
of professional intervention. 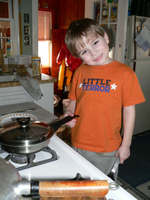 I have not been working for some time and money is very tight these days but I shop at the cheap super market, hit yard sales and second hand stores and somehow find the money to keep going and am so glad I have. His program is pretty basic because he refuses to take many of the supplements and isn't fooled too often when I mix them in food or drinks. I have kept constant with the chelation medication, mineral supplements, yeast treatment and dietary aids. When I started chelation he was just about three years old and he started with a few months of EDTA suppositories (EDTA totally jump started his language) then over a year of TD-DMPS on which he was showing progress but it was slow. Last year our DAN changed him to oral DMPS. Within 3 months everyone was seeing major changes in behavior, lower outbursts, less aggressiveness, better concentration, much more language, reading skills, and personal control (he can control himself now most of the time). A year after starting oral DMPS the overall changes are outstanding.

He is not recovered yet, I don't know if he will ever be completely recovered. In taking him from Severe Autism where we were pretty much locked in the house to a point where he can now communicate and actually function in the world and he gets invited to play dates
with other kids and goes out in public and sits in a restaurant -- all the work and sacrifice has been worth it.

The changes brought on by chelation are so profound that I have people that I barely know from my sons school and family members asking what I have been doing for Ben and they really want to know which shocks me b/c I am too used to the eye rolling when I start talking about Vaccines, Biomed and DAN.

Lisa Brown, former Information Technology Professional once held executive roles at companies like CBS/Viacom, Sony and Prudential Securities.  Before giving birth to my son Ben almost six years ago I was the Vice President of Technical Operations for the Internet Division of CBS/Viacom where my team built and managed all aspects of technology for their large Internet sites.  After the birth of my son I wanted to change carreers.  I graduated from a fully certified 700 hour Massage Therapy Program and went on to take additional classes in Cranial Sacral Therapy.   Autism entered my life soon after receiving the Massage Therapy certificate so instead of establishing a Massage practice or heading back into Technology I decided to stay at home for a few years and dedicate myself to my sons care, education and recovery.  I have spent countless hours reading books and trolling for information on the internet.  If I didn’t do that I don’t know where he would be today. I am also a trained Special Education Advocate.  I dabble in herbalism as a hobby.

This is an encouraging story. How was she able to know that heavy metals were coming out in his urine? We have been Trying to chelate for over a year now and the only way we know to test is a hair test.... and we’ve not seen the numbers budge on that. It would be nice to know if something is working by seeing them in his urine.

Congratulations on the rewards from your long journey. We have not started our chelation trip yet - but have seen just amazing progress in the less than one year of biomed intervention with our son. Friday our son spotted his Uncle in a crowded street and ran up to him shouting "uncle terry" and gave him a big hug. All the people around us thought "how nice". Little did they know they were witnessing a miracle. Keep fighting - I can endure all the eyerolls in the world for my miracle.

Friends and family - we build our lives with them, love and respect them, then when ASD happens, their ignorance and denial becomes overwhelming.

I'm currently having a huge fight with my sister because of a family party coming shortly. I volunteered to bring Italian Sausage (no preservatives) so I don't have bring our own food to the event. She tells my brother to get the sausage because I'm getting something without spices.

There's more to this issue surrounding their choices of main dishes and side dishes and just not getting that small changes can create an inclusive dinner which is much healthier for all.

You're work credentials are impressive. What's more impressive is your dedication to your child's health. There is respect out there for what you're doing, it's just coming from the believers and not those stuck in their tunnelvision world.